Andre Dillard, Gardner Minshew and Fletcher Cox (again) all make sense to be dealt this offseason. 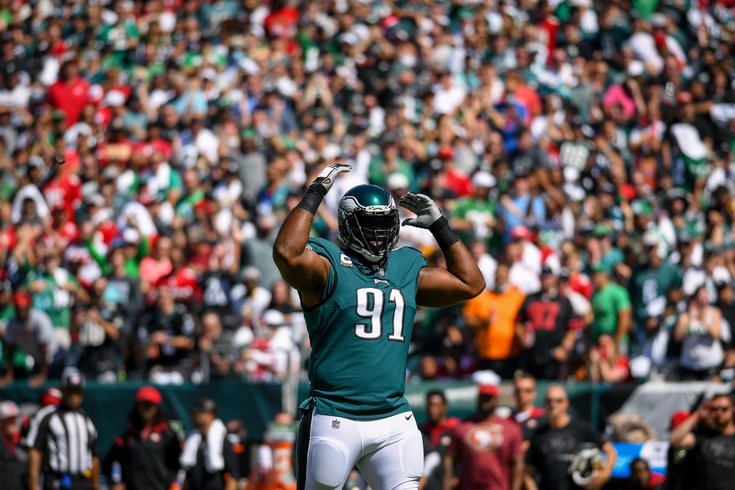 Eagles defensive tackle Fletcher Cox has seen his name pop up in trade rumors for some time now.

The Philadelphia Eagles have compiled 10 picks in the 2022 NFL Draft, including three in the first round. As the team continues to build its roster, they could look to add to their draft capital even further by dealing players no longer in their long-term plans. Here are some Eagles players who could be dealt this offseason.

Dillard had a bad rookie season (and not just at RT), before being lost for the season in 2020 with a torn biceps. He entered 2021 training camp in a competition with Jordan Mailata for the starting LT job, but it was crystal clear after only a small handful of practices that Mailata was going to run away with the job.

Dillard started five games at LT in 2021 and played reasonably well. He showed that he belongs in the NFL and could even start for many of the offensive line-starved teams across the league.

With the Eagles, there isn't really a good fit for Dillard going forward. Mailata will be the starting LT for the foreseeable future, and Lane Johnson is coming off an All-Pro season at RT. Dillard can only play LT, so he doesn't even have value to the Eagles as a swing tackle. When Johnson was missing for several games with his "personal issue," Mailata started at RT and Dillard filled in at LT.

Dillard is also a bad candidate to move inside to guard, because his biggest flaw is that he struggles anchoring against power. Some of the nastier DTs in the league would eat him alive in there. So it's seemingly starting LT or bust. That has value elsewhere, but not in Philly.

What kind of compensation could the Eagles expect in return? Dillard only has one year left on his contract, so the Eagles would probably do well to salvage a fourth-round pick in return for him.

Minshew is a perfectly good backup quarterback on an extremely low cost contract who the Eagles landed from the Jaguars for the low, low cost of a sixth-round pick just before the start of the 2021 season.

I don't know that anyone is trading for Minshew to be their starter in 2022 because they absolutely have to have him, but he could be an option for a team that loses a quarterback to injury during the offseason.

What kind of compensation could the Eagles expect in return? Acquiring Minshew for a sixth-round pick, subsequently getting a win out of him as a backup, and then flipping him for, say, a fourth-round pick would be a job well done by Roseman.

Overall, Roseman had a good 2021, but the one major misstep that he made was restructuring Cox's contract instead of dealing him for a valuable asset prior to the 2021 season.

Because of the complexity of the restructure (it was actually more like two restructures — in 2021 and proactively in 2022), it took the great Jason Fitzgerald of OverTheCap.com 25 minutes to try to explain it below. Good luck digesting this:

What kind of compensation could the Eagles expect in return? Early Day 3 pick.