In Week 10, the Philadelphia Eagles will take on the Denver Broncos in the Birds' fourth and final game against the AFC West. Here are are our five matchups to watch.

In nine games this season, the Eagles have allowed five quarterbacks to complete at least 80 percent of their passes. They were, in chronological order, Dak Prescott, Patrick Mahomes, Tom Brady, Derek Carr, and Justin Herbert. 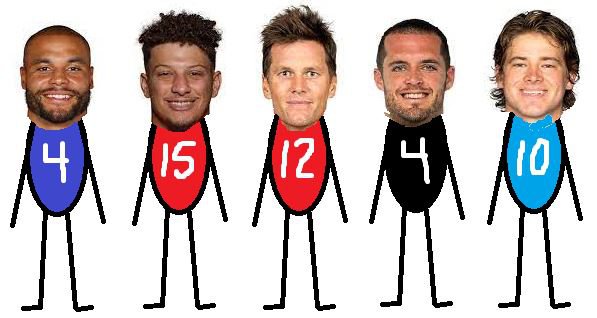 That's a pretty good group of quarterbacks. At least two are future Hall of Famers, and one or two more might join them. A look at their numbers against the Eagles:

Since 2019, Bridgewater has the highest completion percentage in the NFL (minimum 300 pass attempts) among active quarterbacks.

So he's probably dinking and dunking, right? Eh, not really. He's averaging 8.7 "intended air yards" per pass, which is the ninth-highest average in the NFL, according to NFL NextGen stats.

So why is he completing passes at such a high clip? Well, he holds onto the ball for a long time, which gives his receivers more time to get open, but also causes him to take a lot of negative plays. On average, Bridgewater gets the ball out from snap to throw in 2.92 seconds, which is the seventh-slowest time in the NFL. Bridgewater has taken 26 sacks this season, third-most in the NFL.

Against a quarterback with such a high completion percentage, the quick-twitch analysis might be to say, "The Eagles better not play soft again on Sunday." And while that may be true just generally speaking, the Broncos' top two receivers — Courtland Sutton and Tim Patrick — are averaging 14.3 and 15.0 yards per catch, respectively. They are capable of winning on plays down the field.

2) So who should go a'feastin?

Because Bridgewater has taken 26 sacks this season, the Eagles' defensive line should capitalize, right? Last Sunday, they faced a Chargers offensive line with major issues on the right side of the line, and the D-line didn't produce a single QB hit, much less a sack.

They'll be facing a Denver offensive line that has three key injuries to monitor:

A snapshot of Denver's line:

Bolles is really the only above average starter on this roster. In other other words, it's an already bad line that is now also banged up.

In my opinion, the Eagles' defensive line should try to hit Bridgewater more than zero times on Sunday. #Analysis.

UPDATE: Bolles, Glasgow, and Massie are all out.

3) The Eagles' commitment to the run vs. the Broncos' run defense

Over the last three weeks, the Eagles have faced a trio of defenses that give up a whole lot of rushing yards:

To the Eagles' credit, they ran the ball against all three of those teams, and were effective, at least against the Lions and Chargers. This Sunday they'll face a Broncos defense that is allowing 98.3 rushing yards per game, which is sixth-best in the NFL.

I guess I'm just curious to see if that was matchup-based, or if the Eagles' staff came to the realization that Jalen Hurts is not an ideal quarterback to lead a pass-happy offense, and their personnel is better suited toward running early and often.

If they commit to the run against Denver, then the Eagles may be trying to establish that as their offensive identity, even if only for the rest of this season.

4) Dallas Goedert vs. the Broncos' linebackers

The Broncos' two leading tacklers during the 2020 season were Alexander Johnson and Josey Jewell, both of whom are on injured reserve. Justin Strnad, who has started five games in their absence, went on the COVID list on Tuesday. They're thin at linebacker.

The Broncos' starting linebackers currently are Kenny Young, who is on his third team since entering the league in 2018, and Baron Browning, a rookie third-round pick.

The Eagles should be looking to attack them with Goedert, especially if the run game is effective and they can get favorable looks in the passing game via play action, etc.

The Broncos are 29th in Football Outsiders' special teams DVOA rankings. 34 of their 45 kickoffs have resulted in touchbacks, but when teams return kickoffs against them, they have gotten some big returns. The Broncos are allowing a league-worst 35.7 yards per return, including four returns of at least 35 yards.

Generally speaking, when the ball is kicked into the end zone, the Eagles are probably best served to just take the ball at the 25. But if there's a game in which they should maybe be more aggressive, it's against this team.

The Broncos also had a punt blocked against the Cowboys last Sunday, but were able to keep possession on an odd play in which a player on the Cowboys' return team touched the ball past the line of scrimmage, so it functioned the same way as a muffed punt would.

Cowboys block the punt, Broncos recover as it was caught past the line of scrimmage and kept the ball…………………. pic.twitter.com/l7935fBDCZ

If you'll recall, the Eagles won a game earlier this season in Carolina in large part because of a punt block. They could use a big special teams play in this matchup.