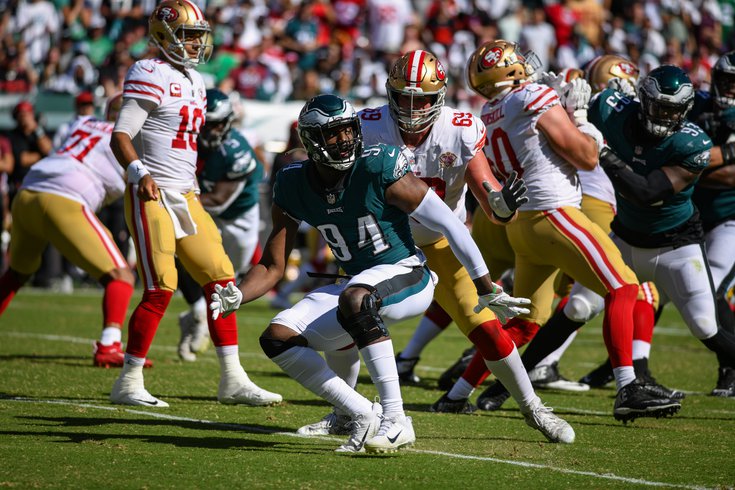 The Philadelphia Eagles have a few new injuries this week, with CB Avonte Maddox, CB Darius Slay, S Rodney McLeod, DE Josh Sweat, and WR DeVonta Smith all joining the list. The Denver Broncos have a slew of guys on injured reserve.

Here is the Eagles-Broncos injury report, with analysis. We'll update as the week progresses.

• DE Josh Sweat: Sweat was a full participant, so he'll likely be a go on Sunday.

• RB Miles Sanders (IR): Sanders was carted off against the Raiders in the first game this season that Nick Sirianni appeared to prioritize the run game. Sanders' injury isn't season-ending. He'll likely be out for just a few weeks. The run game has been heavily featured in each of the two games that Sanders has missed.

• RG Brandon Brooks (IR): Brooks suffered a pectoral injury against the 49ers. It's "only" a pec strain, as opposed to a tear, so while he'll likely miss time (about 8 weeks, per Lane Johnson) on injured reserve, it's not a season-ending injury. Brooks got hurt Week 2, so Week 10 will be 8 weeks. Nick Sirianni was asked about Brooks' possible return, but no useful information was given.

MORE: Eagles at Broncos: Five matchups to watch | WTS: Sirianni, Eagles appear to have figured it out — at least on offense | Eagles power ranking roundup: Week 10

The Broncos have a boatload of injuries.

• LT Garett Bolles: Bolles is the only clearly above average starter on the Denver line. This is a big loss.

Maybe the Eagles' defensive line will hit the quarterback more than zero times on Sunday.

• LG Dalton Risner: The Broncos can't afford to be without a fourth starting offensive lineman.

• LB Baron Browning: The Broncos have a couple of linebackers on IR (shown below), so they are already depleted at LB.

• Edge Bradley Chubb (IR): Chubb is a former fifth overall pick. He had 7.5 sacks in 2020, but hasn't yet broken out the way Denver would have hoped. He's on IR with an ankle injury.

• WR KJ Hamler (IR): Hamler was a 2020 second-round pick out of Penn State. He's a slot receiver with blazing speed who had 30 catches for 381 yards and 3 TDs as a rookie. His season is over with a torn ACL.

• LB Micah Kiser (IR): The Broncos signed Kiser off of the Rams' practice squad earlier this season. His absence is perhaps only noteworthy because Denver is already down a couple of linebackers. Kiser did have a monster game for the Rams against the Eagles in Philly last season.

• CB Bryce Callahan (IR): Callahan has played in 8 games this season, with 3 starts. He has 4 pass breakups and a sack.

• LB Justin Strnad: 9 games, 5 starts. Strnad has struggled when he has played.

• CB Michael Ojemudia: Ojemudia was a third-round pick of the Broncos in 2020. He played in all 16 games, starting 11, with 62 tackles, 6 pass breakups, and 4 forced fumbles as a rookie, He suffered a hamstring injury and hasn't played yet this season.