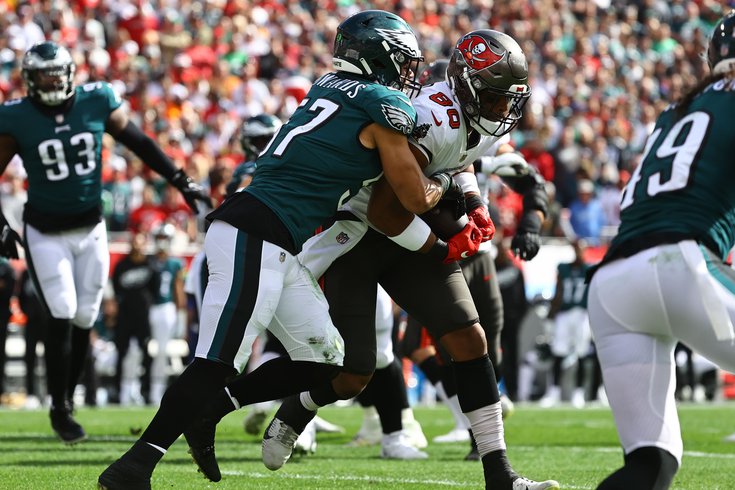 The Eagles got absolutely dominated by a superior team in the first half of Sunday's playoff opener, leaving Philadelphia in a 17-0 hole that will be tough to climb out of in just 30 minutes.

• It took multiple injuries and too much time for Philadelphia's pass rush to get going in this one, but the pressure they got up front in the second quarter was the only good part of this half for the Eagles. Ryan Kerrigan, who has been one of the worst players on the team for most of this season, effectively ended the day for Tristan Wirfs with a rush late in the second quarter, blowing past him to bring down Tom Brady and preserve some sense of hope for the Eagles heading into halftime.

That said, it feels fitting that the major highlight of the opening 30 minutes was beating up on an injured Bucs lineman and eventually his backup. It was that kind of half.

• The first half being over is objectively good for the Eagles, I guess. That was horrific and likely can't get worse. Famous last words, I guess.

• Other than their inability to put pressure on Tom Brady and the impossibly soft coverage the Eagles played to open this game, it was a good start for the defense. Seeing this script play out the same way all season made you expect a soft start to the game for the defense, but it didn't make it any less maddening to watch Jonathan Gannon basically gift wrap a touchdown to Tom Brady and the Bucs out of the chute.

I would argue the most infuriating coverage alignment of the year came on Tampa's first drive of this game, with Jonathan Gannon putting his guys in sticks coverage on a second-and-seven in the red zone. The Bucs had already chewed up yards on short-to-intermediate plays up to that point, and gift-wrapping Brady an easy screen opportunity would have been a questionable choice on third down, let alone on a play where he could gain a few yards and still have multiple shots to pick up the first. They only ended up needing the one play, and the Bucs would punch it in with a run two plays later, putting Philadelphia in an early hole to start the postseason.

It didn't get a whole lot better from there. For a brief moment in time during the second series, the Eagles played tighter coverage and immediately forced the Bucs into a three-and-out, even if there were some self-inflicted mistakes by the Bucs on that series. For some reason, Gannon saw that approach succeed and immediately went back to the putrid, soft coverage that everyone has hated to see all season. Maybe Brady kills them regardless, but letting him dictate the terms of the game and get into a rhythm with very little resistance is a bad strategy. The Bucs are down multiple skill position guys, maybe the Eagles should play like that's the case at some point today.

And look, it shouldn't have shocked anyone that the greatest quarterback in the history of the sport used that soft coverage to get into a rhythm, absolutely picking the Eagles apart as they dropped seven-plus yards off of his targets before plays ever started. This is exactly what happened in most of Philadelphia's losses this year, even when they weren't against a Brady-level QB on the other side. There is no world where you can afford to let playoff-level starters basically have an extended warm-up to open the game, because once they find that zone, you're going to have a monster of a time taking them out of it over the ensuing four quarters. That's doubly true for Brady, who has not become the most decorated player of all-time by happenstance. Braindead approach to this game on defense.

• Tactically, I had fewer problems with the way the Eagles approached the game on offense early on Sunday. Rather than letting Tampa's opening touchdown drive spook them into being something they're not, the Eagles tried to stick to their strengths and run the ball a couple of times on the opening series. Unfortunately, Tampa's team speed showed up in a big way on a critical third-down, blowing up a read-option where Jalen Hurts was left with two bad choices as he tried to decide where to go with the football. The Bucs brought him down in the backfield in the process, though I'm not sure a handoff to Sanders would have gone any better.

Those early run failures did highlight something the Eagles should have been aware of, however. Most of what they tried to do and run was going sideways early in the game, which is just asking for a trouble in this matchup. The strength of this team is between the tackles, and if Philadelphia doesn't find a way to succeed playing power football up the middle, they're going to have a long day at the office. Please cut the sideways plays in half, if not out of the gameplan altogether.

• Jalen Hurts wasn't asked to do a lot during the first couple of series, but the tendencies that led to losses against the better teams they played this year showed up again in the first half, with Hurts refusing to settle in the pocket and read the field. At the end of their second series, the Fox cameras picked up an exchange between Sirianni and Hurts that suggested the head coach was pissed off at his QB for not using the ample time and space he had in the pocket to find somebody downfield. Hurts' decision to scramble to his left and throw across his body nearly led to an interception, and seemed to come at the cost of an open deep shot to Quez Watkins.

Missed opportunities like these didn't matter as much when the Birds were beating up on teams with offenses run by the likes of Trevor Siemian and Teddy Bridgewater, but they have been there all season, and it's one of the reasons we have expressed concerns about Hurts around these parts. "Finding ways to win" to make the playoffs is all well and good, but you need a different level of QB play to avoid drowning against elite competition in the playoffs. Tampa was able to stack eight guys in the box on a good chunk of plays in the first half, all but daring Hurts to beat them. So far, he has made the Bucs bet look like a smart one, and even when the Eagles have had what looked like favorable pre-snap matchups, Hurts hasn't recognized them, refusing to check out of whatever the initial call was.

What you saw throughout the first half was the difference between having an all-time great behind center and a young QB who has the training wheels on a lot of the time. With Brady toggling in and out of tempo offense in the first half, the Bucs were light years faster than the Eagles on offense, getting plays off with upward of 25 seconds on the play clock throughout the first half. The Eagles could not have moved any slower by comparison, and the Bucs' defense had a much easier time timing the snaps as a result, flying into the backfield with very little resistance.

You can definitely complain about Sirianni not adjusting the gameplan to attack the middle and look downfield more, but given Hurts' lack of composure through 30 minutes, it feels fairer to pin the problem on the QB, who looked like a deer in the headlights for most of the half. You can't blame the coaching staff when a QB simply does not see or target open players. And after Hurts made one of his best plays of the half with a deep shot to Quez Watkins, he immediately gave all the goodwill earned right back, throwing an interception to end the scoring threat late in the half.

The game has looked like many thought it might be based on the matchup on paper. A young, inexperienced group is shrinking in the moment, and the reigning champs look built for this, even with major skill position losses in recent weeks. This one might get ugly in the second half.

• Philadelphia's complete inability to get Devonta Smith involved was absolutely ridiculous, and I thought Troy Aikman did an excellent job throughout the second quarter of driving that point home. Smith was seeing a lot of soft coverage on the outside, similar to what the Eagles were showing every Bucs skill position guy, and the difference is Hurts never really looked his way. There was 10 yards of space between their best wideout and the guy covering him, and the Eagles still couldn't get him involved.

That simply can't happen with your top target, and when you're going to a well-covered Jalen Reagor on a critical fourth down, you know you are truly lost. An absolutely miserable half.

• If you thought the start of the playoffs would lead to Derek Barnett avoiding soul-crushing penalties, I suppose you haven't been paying attention to him much this season. At least this time he has a case that he wasn't really at fault — Troy Aikman and the officiating guru on the broadcast were adamant about it not being a penalty, and I think there's merit to that argument after seeing Barnett pull up at the end of the play. But this guy has a constant target on his back and is never going to get the benefit of the doubt, so the Eagles gave up a crucial 15 yards and a first down in the process. Tough break.

(Obviously, there's no guarantee they would have gotten a stop on the third-down they should have had after that play, but it was their best chance to force a change of possession on the drive.)

The Eagles did not get the benefit of the whistle in the first half, generally speaking, with a brutal holding call on Jason Kelce around the two-minute mark wiping out Philadelphia's best offensive play of the half. When it rains, it pours.

• Arryn Siposs was one of the Eagles' best and most reliable players for most of the season, and he has picked a bad time to completely lose the plot. After a brutal showing in the final game of the regular season, Siposs opened the playoffs with a total shank, giving Tampa a golden opportunity to go up two scores. The importance of special teams is often magnified in the playoffs, and the Eagles got off to a rough start there.

• Nick Sirianni hamming it up and doing corny Philadelphia-adjacent stuff at press conferences is fine, there's no harm in trying to make a connection with the city by speaking its language. Maybe shelve the Rocky motivational videos and speeches, though, and focus on actually preparing for the opponent in front of you.

• Jalen Reagor punt return screw up to end the half, scratch it off of your Eagles bingo card.