Eagles can help Wentz avoid rush by getting DGB involved vs. Vikings 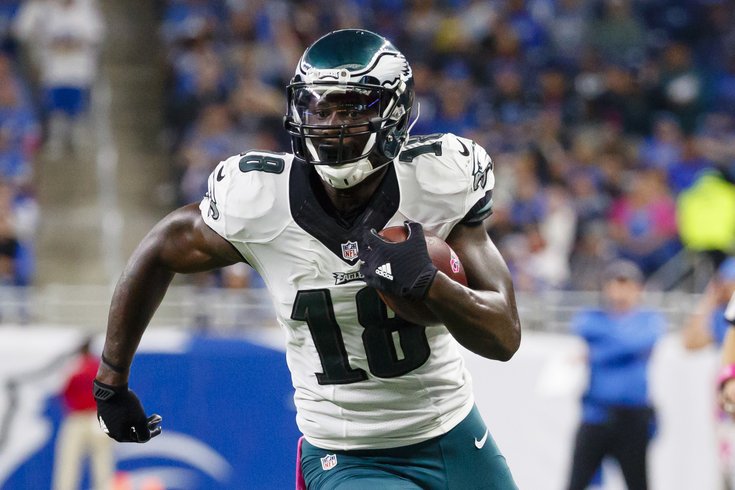 In each of the last four games, DGB has been targeted four times by Wentz, but it appears that he's finally fully up to speed on the playbook, meaning his playing time and role in the offense are only going to continue to increase.

After Friday's practice, the second-year wideout -- who the Eagles acquired from the Titans midway through the preseason -- felt confident that he would see a similar percentage of snaps, if not more, against the Vikings this weekend. He also confirmed what offensive coordinator Frank Reich and head coach Doug Pederson said this week -- he's ready to dump the training wheels and be a full-time player.

"DGB is playing very well. I think he looks fast; he looks strong," Reich said Thursday. "We see it every time he gets the ball in his hands, he's hard to tackle. He's a big man who can run fast. He's gaining more and more confidence. He's another guy that when you sit down, you say, ‘How do we continue to get him the ball more and more?’ Without a doubt, he's a big-play guy."

And as for his knowledge of the playbook?

Green-Beckham's increased role has come at the expense of Josh Huff, who was on the field for just 17 percent of the Eagles' offensive snaps in Week 6. So does Pederson now see him as the starter on the outside opposite of Agholor?

"Yeah, and where we are with the receiving group -- again, we go into game plans where we put certain guys in certain positions, so in my opinion everybody is kind of a starter. But he's really done a nice job here in the last few games, last few weeks, of understanding what we're asking him to do. [We're] moving him a little bit more around in formations, but still trying to keep it to one position for him. Utilizing his strength; I think he's a tremendous slant runner. I think he can run those deeper in-routes, things like that, and utilize his height and strength in the red zone a little bit more. That's him, and that's the type of player that he is.

"Can he be an every-down starter? I think he could eventually probably get there. I would love to have a full off-season with him to really fine-tune his craft and work him; because we got him so late in training camp, right at the beginning of the season, that we just didn't have the time to work, so we're kind of bringing him along slowly each and every game."

His size alone makes him a valuable receiving option for his rookie quarterback. Unfortunately, that may not result in a ton of production against a Vikings defense that is expected to put tremendous pressure on Wentz.

However, Pederson did point out Green-Beckham's abilities on the slant route -- his build is similar to Terrell Owens, who is one of the best receivers in NFL history at running that route -- and against a defense that can get into you backfield as quickly as the Vikings can, getting the ball out quickly is going to be a necessity. And there aren't many routes that develop more quickly than the slant.

While the Vikings defense is good at a lot of things, one area in which they struggle is allowing yards after the catch -- they're allowing 123 YAC/game, 11th-worst in the NFL.

And it's not like DGB is easy to tackle. Just ask Tahir Whitehead.

DGB with a vicious stiff arm on Whitehead to move the chains on 3rd down. Wow! pic.twitter.com/xOqSkZlkHI

Or any of these Washington defenders...

The Eagles would be wise to get him more than four targets this week. Especially in situations where he has a chance to make something happen after the catch.