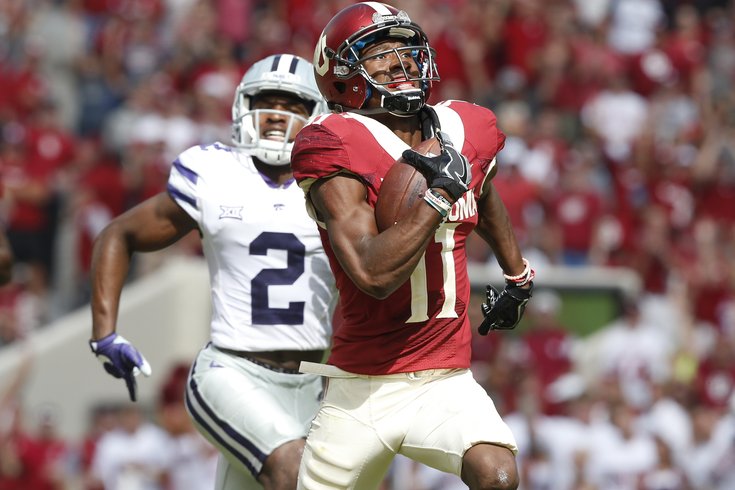 As long as you're taking in some college football action this Saturday afternoon/evening, here are some players who could make some sense for the Philadelphia Eagles in the 2017 NFL Draft.

Etta-Tawo is second in the nation in  receiving yards. He started off the season on fire, topping 100 yards in each of his first five games, but he has cooled off more recently.

Here are some highlights from his huge game against UConn:

This is the first season that Etta-Tawo has produced, as he totaled 938 receiving yards in three years combined at Maryland before transferring to Syracuse. Etta-Tawo is a good bet to receive an invite to the Senior Bowl. The Eagles' need for more receivers is obvious, and Etta-Tawo could be good value in the mid-late rounds.

While the Eagles certainly have some pass rushers who have proven they can get to the quarterback, defensive end is a sneaky underrated need upcoming this offseason. At RDE, Connor Barwin has struggled to produce in Jim Schwartz's scheme, as he is a better fit in a 3-4 defense where his versatile skill set can be more effectively utilized.

Dawaune Smoot of Illinois is a less heralded player in this year's draft class because his team stinks, but he is an explosive, penetrating defensive end whose skill set would fit in well in Schwartz's defense.

Smoot's numbers so far this season aren't eye-popping. He has 30 tackles (8 for loss), 1 sack, and 2 forced fumbles. A season ago, he had 40 tackles (15 for loss), 8 sacks, and 3 forced fumbles. Schwartz likes defensive linemen who can consistently find their way into opposing backfield and make tackles for loss, putting the offense far behind the sticks. That's what Smoot does. Here's his game this year against Nebraska, where he didn't have a sack, but made a slew of disruptive plays that won't show up in the stat sheet:

This is a player who will almost certainly receive a Senior Bowl invite, where he'll get more national exposure.

In 2015, Jones had four interceptions, four forced fumbles, two fumble recoveries, 10 pass breakups, and two touchdowns (one on an INT, one on a fumble recovery). He's one of the lesser-known corners early in the draft process, but he's one of the best.

Note that when the ball is in the air, Jones thinks it's his. He plays with a certain level of confidence that is ideal in an NFL corner. The Eagles' need for corners is obvious. If they can find a pair of good cover corners to go along with the talent on the rest of the defense, they can become a top five type of unit. Jones could be a guy who is in play in the back of the first round.

Last week, DeSean Jackson said that he'd be open to returning to the Eagles. As we noted, last offseason, the Eagles tried unsuccessfully to add a receiver who could take the top off a defense. They signed speedy receivers Chris Givens and T.J. Graham, who both ran a 4.41 40 at the 2012 Combine. After Givens and Graham proved to be bad DeSean knockoffs (to put it kindly) in training camp, the Birds added 2016 undrafted speed receiver Bryce Treggs, who could not make the 49ers' final 53-man roster.

While the Eagles will continue to develop Treggs, my guess is that they will try once again to add a speed receiver next offseason. One guy who fits the bill is Westbrook, who has absolutely blown up the last three weeks, catching 26 passes for 574 yards and 8 TDs. Here's his game a couple weeks ago against Texas:

Look at what he did on one of his TDs in that game to this poor bastard:

My conclusion: He good.

The Eagles don't currently have a deep threat opposing defenses have to respect. Westbrook could be a good fit for the Eagles' offense, giving Carson Wentz a legit vertical option in the passing game, while also opening things up underneath for players like Jordan Matthews, Zach Ertz, and Darren Sproles.

The Eagles already have three talented tight ends in Zach Ertz, Brent Celek, and Trey Burton, so why would they draft another one? Well, to begin, Doug Pederson wanted to keep four tight ends coming out of training camp, but Chris Pantale simply was not worthy of a roster spot. And so, the Eagles have rolled with three so far, and on occasions in which Ertz or Burton have been hurt, OT Matt Tobin has filled in at tight end.

The Eagles are likely to add a tight end, whether that be in free agency, the draft, or as a priority undrafted free agent. The question is, would they add one like Engram high in the draft?

Engram isn't your typical tight end. At 6'3, 227, he's shorter and lighter than wide receiver Dorial Green-Beckham. Ole Miss moves Engram all over the formation, but he has wide receiver skills with great hands and very good run after catch ability. He is also a better blocker than you might assume for his size. A highlight reel:

Frankly, in my view, it doesn't matter if you want to label him a tight end, a wide receiver, or some kind of other offensive weapon. What he does is catch the ball, get first downs, and make plays. The Eagles don't have many players in their offense who do that.