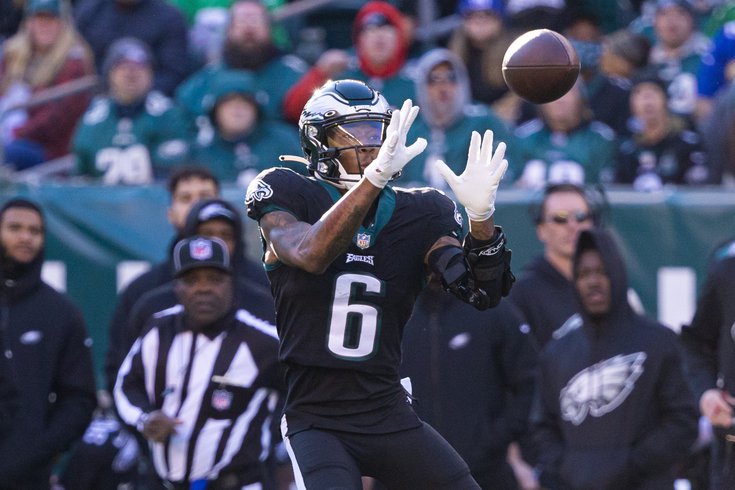 A big play and a bit of drama that followed.

With the Eagles and Commanders both pretty stagnant through the first few possessions, DeVonta Smith sent a shockwave through the FedEx Field crowd, hauling in a 45-yard pass along the sideline to bring the Eagles into the red zone at Washington's 16.

There may have been an argument there over whether Smith stayed in bounds, and Commanders coach Ron Rivera did try to have it, but the Eagles got the snap off on the next play before the challenge flag hit the ground.

The refs had to pause to discuss, but the play stood, and eventually set up a 32-yard field goal from Jake Elliott that put the Eagles up, 3-0.

And it wouldn't be long before they struck again.

After Washington took back over, and on just the second play of the drive, Brandon Graham got to Carson Wentz, who's already been getting punished after a quarter and change, and knocked the ball out for the Eagles to recover at the Commanders' 23.

The offense came right back out, and Hurts and tight end Dallas Goedert connected immediately for the first touchdown of the day.

Dallas Goedert slides through for the @Eagles TD! #FlyEaglesFly