Is the Eagles' defense worth worrying about? 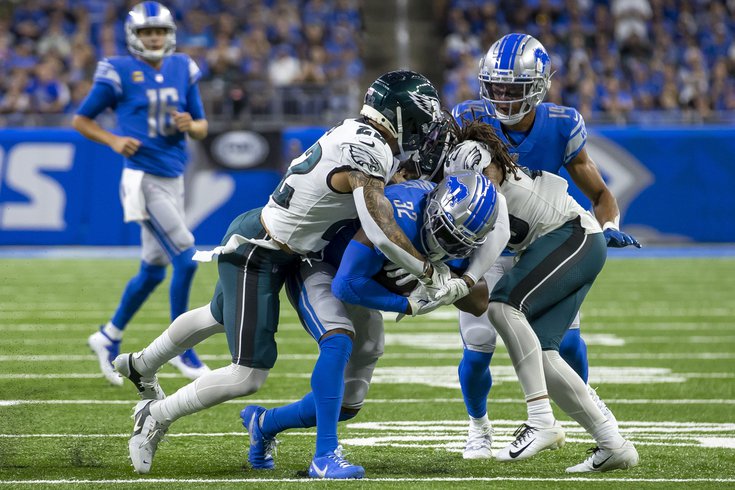 D'Andre Swift had himself a day against the Eagles rush defense.

Yes, it's been one game.

Yes, the Eagles won their season opener in Detroit on Sunday.

But there were some pretty glaring issues on defense and you can be sure Jonathan Gannon and his crew will not be happy when they hit the meeting rooms back in South Philly next week.

The Birds were inconsistent on defense, to be sure, relenting an ugly touchdown march to open the game before forcing three consecutive three and outs and a pick-six in the first half. But in the second half, the issues looked more consistent.

Here's why it might not be an stretch to be worried...

Where are the sacks?

The Eagles added sack machine Haason Reddick, and a school bus of a defensive tackle in Jordan Davis while retaining their best defensive linemen this offseason. They also returned a healthy Brandon Graham after an ACL tear ruined his 2021.

Without Graham and the aforementioned additions last year, the Eagles had just 29 sacks as a team — the second fewest of any team in football (and 26 fewer than the Steelers). Surely, with the Lions offensive line hit by the injury bug early and all this talent, they'd be able to bring down a relatively immobile quarterback in Jared Goff right?

Well, while they were able to get consistent pressure to be sure, the D-line did not bring Goff down at all until the fourth quarter, a key third down half sack for both Graham and All-Pro Fletcher Cox. It came on a fumbled snap at that. It was a good start, but coming away from Week 1 of 17 with a single sack on the ledger is not a promising sign moving forward.

Why can't they tackle?

Anyone who watched the game in real time saw broken tackle after broken tackle as the Lions' running backs picked up yards at will all game long against an Eagles rushing defense that allowed the ninth fewest rushing yards in total last season.

Philly defenders got one or two hands on Lions ball-carriers at least a dozen times without a tackle to show for it, and Detroit was able to pick up yards in bunches after first being touched.

The Eagles practiced a lot less than in previous years in training camp with essentially no live hitting. The tackling looked suspect in the preseason games, and shorter sessions on the field at the NovaCare Complex had to have played a role in a shaky start in Week 1 for the defense.

Here's what Gannon had to say back at the end of July when asked about this potential outcome:

"I think the head coach's schedule for what he has set up this training camp is phenomenal and I'm in love with it.

You know, when talked about it, ‘Hey, here is what we're going to do,’ you know, it's not just a day-by-day thing. Sometimes you can look at, ‘Oh, they're only the field for a buck 15.’ Well, we have 30 some odd days. You don't see the walk-throughs and the hours of meetings that these guys go through, and the film study and the film session. Our guys will be ready to go with this schedule, and I actually think they'll be more ready to go this year."

The defense allowed 386 total yards and 35 points. They also allowed conversions on nine of 14 third downs, which is less than ideal. You can draw your own conclusions about readiness.

A season ago, the Eagles defense allowed a tick under 108 yards per game on defense, and 4.0 yards per carry (and 18 rushing TDs, just over one per game). In their ugly but still successful outing in Week 1, the defense set a terrible tone for the season.

The Lions ran 28 times for 181 yards (6.7 yards per carry) and three rushing touchdowns. They also let D'Andre Swift break through for a gain of 50 yards and four other rushes for more than 10 yards.

This would be acceptable if the defense tightened it up against the pass — but the stout air defense from the first three quarters bent and broke late in the game, allowing Goff to overcome some terrible decisions and excellent coverage early (including four tipped passes that were nearly interceptions) and hook up with Amon-Ra St. Brown in the third and D.J. Chark in the fourth, cutting a double-digit deficit to just a field goal.

Gannon sort of implemented a bend-but-not-break defensive approach in his first season running the Philly defense. In Year 2, it looks like it'll be more of the same. The real question Eagles fans will need to contend with in the aftermath of this way too close victory is whether the Lions were better than we thought, or the defense is going to struggle against both good AND bad teams in 2022.

Allowing 35 points to the Lions = how many points given up to the Vikings next week...?