Kevin Chaffinch, 41, was a founding member of the percussion group at Lincoln Financial Field 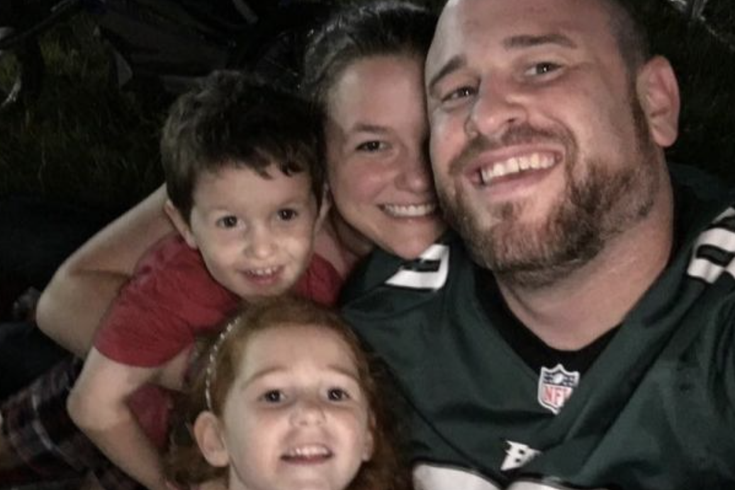 Kevin Chaffinch is pictured with his wife, Megan, and two children, Olivia and Sam. A founding member of the Philadelphia Eagles Drumline, Chaffinch died in July after suffering a fatal heart attack at the age of 41.

There are few game day experiences in professional sports that compare to the atmosphere at Lincoln Financial Field in South Philadelphia, where the Eagles have made a home for families across the region when the NFL season rolls around each year.

For the past ten seasons, the Philadelphia Eagles Drumline has been a staple at the stadium, providing the hard-to-place emotional spark we all associate with football in the fall.

And for the past 10 seasons, Kevin Chaffinch had been an integral member of the Eagles Drumline, a founding figure who partook in the festivities for every home game and other specials events like the Thanksgiving Day Parade.

Chaffinch, 41, died on July 19 after suffering a heart attack in the middle of the night at home.

"There was no warning, nothing," said Megan Chaffinch, his wife. "His dad passed away at 55 from a heart attack, so he was on top of things like that, as anyone would be whose parent passed away like that as well. According to his cardiologist, everything was supposed to be fine. He was good, just going back for yearly checkups. We were laying in bed. He said he felt funny, and within a couple hours of that, I was sitting at the hospital and the doctors came in and told me he had passed away."

Chaffinch, 32, survives with their two children, 11-year-old Olivia and eight-year-old Sam, at their home in Bear, Delaware. A GoFundMe page was set up by Chaffinch's brother, Brian, to raise money to support Megan and her children as they rebuild their lives.

At a funeral last week in Bensalem, Megan said nearly 200 people showed up to pay their respects to Chaffinch.

Most of the Eagles Drumline, if not the entire group, made it out to the funeral, Chaffinch added.

"The Philadelphia Eagles are saddened by the passing of Kevin Chaffinch, a proud and longtime member of the Eagles Drumline," Eagles President Don Smolenski said. "A talented musician dedicated to his craft, Kevin played not only an instrumental role in the formation of the Eagles Drumline, but also in its evolution over the years to become an integral element of the game day experience at Lincoln Financial Field. He had so much love and passion for the Eagles, his fellow band mates, the fans, but most importantly, his family. We send our deepest condolences to his wife, Megan, and his two children, Olivia and Sam." 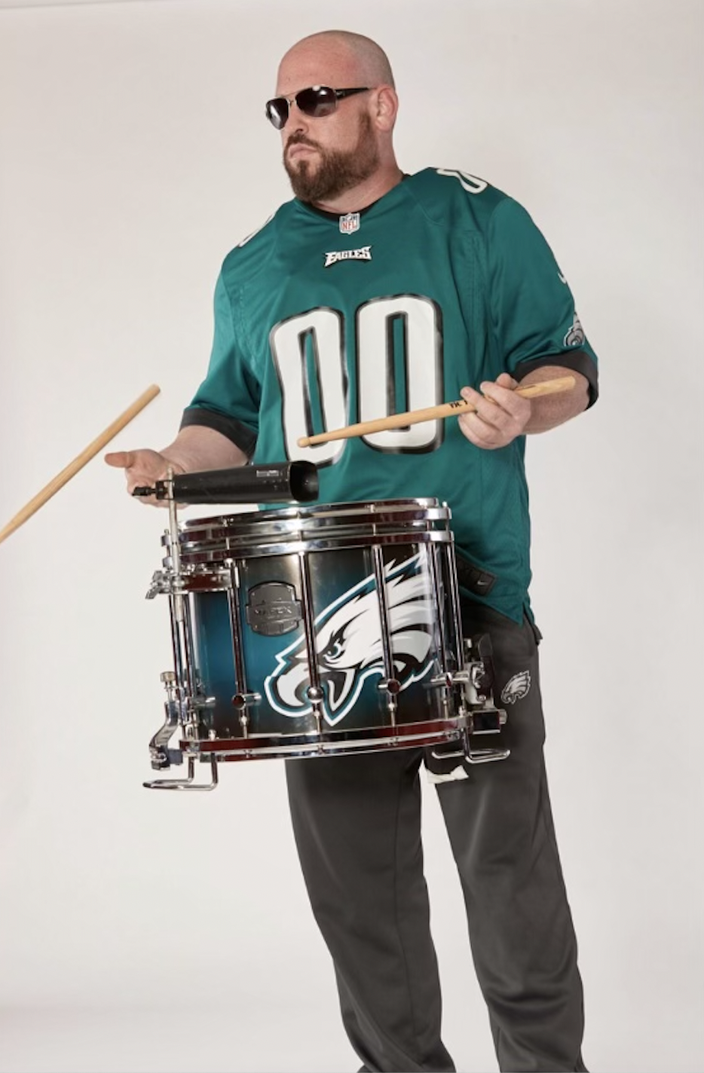 Kevin spent his life dedicated to music, earning a degree in percussion and performance with a full scholarship at the Berklee College of Music in Boston. He was an influential mentor in several high school music programs, including at Cumberland Regional High School in South Jersey, where he and Megan met in 2007, just after she graduated from high school and had returned to the school to work for the marching band.


"We did all of it together for a while and then I faded out a little bit when we had the kids," Chaffinch said. "But music was always, always, always a part of everything that we did. Even just sitting at the house, he was drumming on the counters, or we would watch a movie together and he'd be drumming along to the soundtrack on my shoulder. It's annoying until it's not there anymore, I'll tell you. I'm going to miss the tapping."

Chaffinch was part of the earlier Talon Drumline that used to play informally outside the Linc, sometimes joining the Eagles Pep Band in the parking lot.

"They used to march around the parking lot and kind of do some hype stuff, but at the time they would get kicked out of the parking lot," Chaffinch said. "The Eagles wanted nothing to do with them."

It was Kevin and his good friends, Eagles Drumline captain Andy Moffatt and since-retired co-founder Larry Cauley, who helped orchestrate a formal arrangement with the team to bring the entertainment both inside and outside the stadium beginning in 2010. The group grew to 27 marching percussion specialists by its tenth anniversary, leading the way in what has become a growing revival of drumlines in professional sports.

The drumline played a primetime role in the lead-up to Super Bowl LII, performing on several shows, and later was invited to attend the afterparty. At the Super Bowl parade, they performed on a flatbed joined by the Eagles Cheerleading Squad and the Eagles Pep Band. 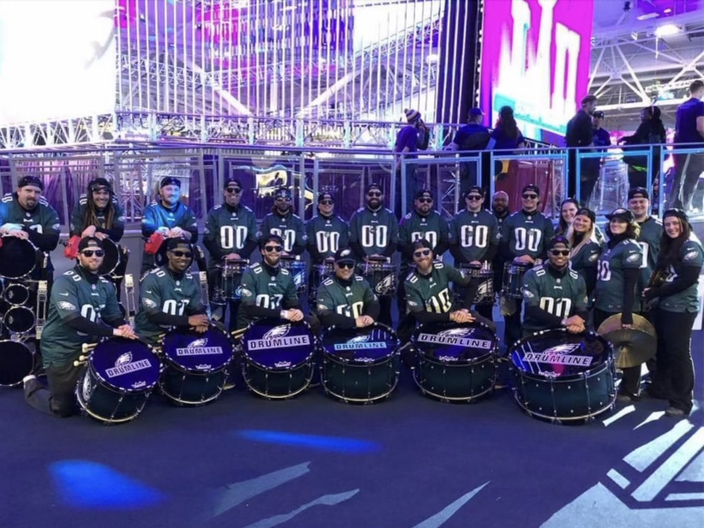 During the 1990s, Chaffinch shared that Kevin had been a member of the band Chasing Gray, an almost-breakout group whose 1997 album, "A Break in the Clouds," earned them the designation of Spin Magazine's Best Unsigned Alternative Band of 1998.

Chaffinch nearly became the touring drummer for John Mayer, another Berklee graduate. He had auditioned to join Mayer's band and was told he would be going on tour. He had even quit his job, but at the last second, Mayer's manager called Kevin and said they were going to go with someone else, leaving him high and dry.

"It's been a lifelong joke with him — like, screw John Mayer," Chaffinch said. "He kind of screwed him over a little bit. It ended up being a joke every time a John Mayer song would come out."

In addition to his work in high school music programs, including the competitive indoor percussion team at Cumberland Regional High School, Chaffinch also was a therapist who had received a graduate degree in psychology. He was the director of a behavioral health PACT team in Pennsylvania in the five years leading up to his death and had also maintained a school gig with the music program at Middletown High School in Delaware.

"He took so much pride in teaching," Chaffinch said. "There are several kids from the Cumberland Regional years that I knew who are adults now and are doing things in music that they never even imagined they would have wanted to do. He had this way of pushing them and took so much pride in setting them on the course for where their lives have ended up."

Most importantly, Chaffinch said those leadership qualities translated in her husband's family life.

"He was an amazing dad and an amazing husband," Chaffinch said. "There was never a question that the three of us were always number one."