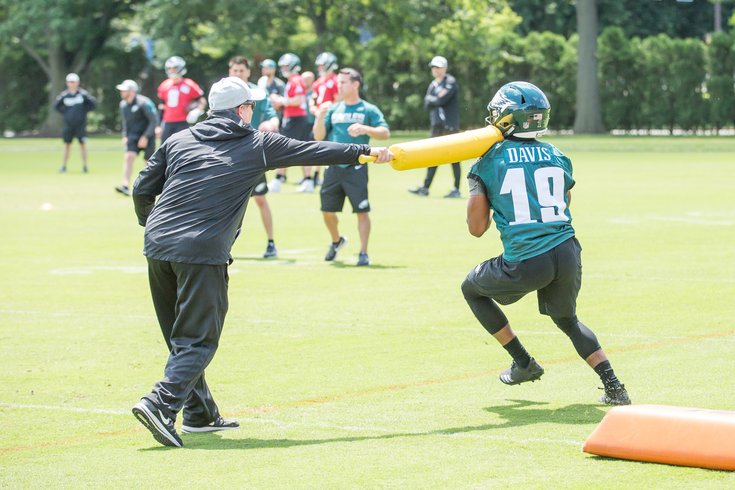 The Philadelphia Eagles have officially set their initial practice squad, though it could certainly change over the next few days, as teams around the league continue to claim/waive players.

A look at their initial 10 guys:

• RB Josh Adams: There was some thinking that Adams would be claimed by some team on waivers, but Adams didn't really show that much during the preseason games, and has struggled staying healthy. The Eagles a probably happy to have him back, as he does have some upside.

• CB Chandon Sullivan: It was a no-brainer for the Eagles to retain Sullivan, after he showed some ability in the preseason games. I like his chances of making more noise during training camp next year.

• CB De'Vante Bausby: Jim Schwartz said that the team felt confident bringing Bausby up from the practice squad to play if multiple corners went down last year, but aside from Ronald Darby missing 10 games, the Eagles stayed relatively healthy there. Bausby provides the Eagles with some familiarity and versatility as a guy who plays inside and outside.

• DT Winston Craig: This is mildly surprising. Aziz Shittu and Elijah Qualls are more talented players, but Craig is a hustler. He is a pure practice player, as opposed to a prospect who may eventually contribute on Sundays.

• LB Asantay Brown: Brown missed almost the entirety of training camp, and some preseason action, but the team kept him around. Obviously, they see something in him.

• DE Joe Ostman: Ostman is another try-hard guy, but is a smaller guy with limited athleticism.

• C Jon Toth: The Eagles like having a center on the practice squad, and Toth was with the team last year.

• WR Greg Ward: Ward spent a big chunk of the season last year on the practice squad. He's back, but did not show much improvement.

• WR Rashard Davis: Davis showed something as a receiver in the preseason games, though he was somewhat disappointing as a returner. Still, he improved from last year to this year, and I'm sure the team noticed.

• TE Billy Brown: Brown would be my most likely player to be replaced by another tight end at some point.