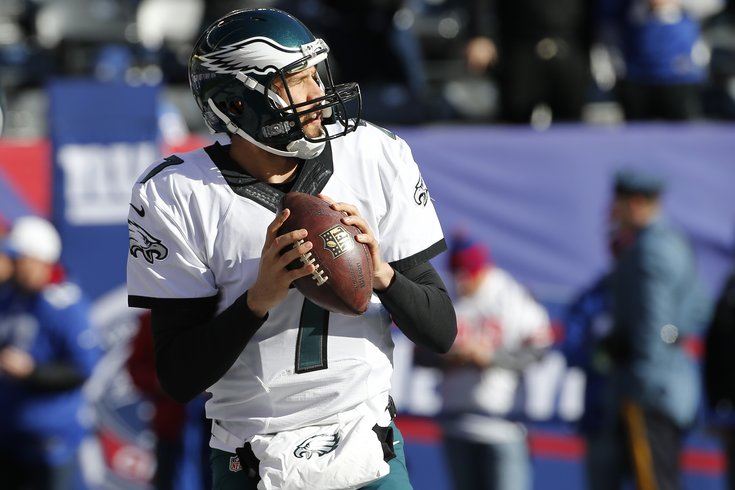 Sleevie Wonder is back, but for how long?

Way back in December, even before Jeffrey Lurie fired Chip Kelly, we published the Eagles' five biggest needs heading into the offseason. At the time, we ordered them like so:

Obviously, a lot has changed since then. The Eagles have a new coaching staff, they moved to a 4-3 scheme, and Howie Roseman did more than his share of wheeling and dealing in free agency. More than three months later, let's take a fresh look at the Eagles' biggest needs.

As we know, the Eagles signed Sam Bradford to a two-year deal worth $36 million, $22 million of which is fully guaranteed. That deal puts Bradford among the top half of starting quarterbacks in the NFL, earnings-wise, even though he has never been close to the top half of the league's performers. The Eagles were likely to achieve a shorter, less risky deal long-term by paying him a figure higher than many of his more successful peers. That's the trade-off for being able to escape his contract with manageable pain after one year, and no pain after two.

Bradford's $18 million per year average is more than what he has shown he is worth over his seven-year NFL career. However, he allows the Eagles to maintain continuity for at least one more season in Doug Pederson's first year as the Eagles' head coach. The shorter duration of the deal indicates that the Eagles are not sold on Bradford as a long-term answer at quarterback.

In free agency, the Eagles then went out and signed the Chiefs' Chase Daniel to a lucrative deal. His deal is a three-year contract worth $21 million ($12 million guaranteed). That number can escalate to $36 million in incentives based on playing time, wins, and playoff appearances, but he would need to be the starting quarterback to reach those incentives.

The Eagles are paying a whole lot of money to a pair of quarterbacks who have achieved next to nothing in the NFL.

Assuming he stays healthy, Bradford's presence will keep the Eagles competitive in an awful NFC East in 2016 and will allow them to develop a young quarterback in the background. For the right to sort of "have their cake and eat it too," the Eagles are paying a high rental fee, but the money they're shelling out for short-term competence (Bradford) and long-term backup stability (Daniel) should in no way prohibit them from finding their long-term starting solution at the most important position in sports.

The Eagles are going to draft a quarterback. It's only a matter of who and in what round. There's even a realistic chance they get aggressive and trade up for "their guy," whether that be North Dakota State's Carson Wentz or Cal's Jared Goff.

The Eagles did nothing to address the offensive tackle position in free agency, which makes sense, seeing as both starting OT spots are filled. However, Jason Peters turned 34 in January and is currently the third-oldest offensive lineman in the NFL. While Peters has had a tremendous career and is a borderline Hall of Fame talent, his career is clearly in decline and he experienced multiple injuries of the "nagging" variety a season ago. This could very well be his last season in the NFL.

Previously, we laid out why the Eagles are highly unlikely to draft an offensive lineman with the eighth overall pick. However, Howie Roseman has stated that this draft class has very good offensive line depth, so expect the Eagles to fortify the trenches in bulk from rounds three to seven.

The Eagles' starters at linebacker at set. However, they have next to nothing in terms of depth. Here's how I would project their depth chart:

Jordan Hicks was a steal in the 2015 NFL Draft, but he slid to the third round because of his injury history. Obviously, last season, after a brilliant start to his rookie season, he was lost for the year with a torn pectoral muscle.

Meanwhile, both Mychal Kendricks and Nigel Bradham have missed seven games over the last two years.

If the Eagles were to lose a linebacker or two, they'd be in big trouble. You can bet they'll be in on linebackers in the draft, and maybe higher than some are projecting.

While not as important as offensive tackle or quarterback, the guard spot was probably the most glaring hole on the Eagles' roster heading into the offseason. Last season, opposing interior defensive linemen like Gerald McCoy and Ndamukong Suh wrecked games because the Eagles' OL interior was glaringly over-matched.

The Eagles' addition of Brandon Brooks in free agency may have been their most important short-term signing. He'll give them stability as well as a massive run blocker at RG. The Eagles also added former Raiders and Jaguars OG/C Stefen Wisniewski, who gives the Eagles a fall-back starter at LG if they don't find an immediate starter in the draft, as well as depth at center. However, it appears that Wisniewski could be little more than a one year band-aid.

While they are in a far better position heading into the 2016 season than they were a year ago, the Eagles must add young talent and depth to an offensive line they have ignored in the draft far too long.

This was already a sneaky, underrated need even before the Eagles rid themselves of DeMarco Murray. Murray is off to chat up a new owner in Tennessee, Darren Sproles will turn 33 in June with one year left on his deal, and Ryan Mathews is effective when healthy, but rarely in good health.

Seeing as you cannot count on Mathews to play 16 games, the Eagles have both a short-term need at running back, and an even bigger long-term need. There's actually a decent chance that the Eagles' 2015 backs -- Murray, Mathews and Sproles -- will all be gone in 2017. Meanwhile, Kenjon Barner has shown glimpses of ability, but his unforgivable fumble against the Patriots as well as his numerous drops against the Redskins last season make him a player who needs to show far more consistency before he's ever to be thought of as a reliable part of a running back rotation.

If there are positions you think we've missed, like cornerback for example, you'll get no argument here.