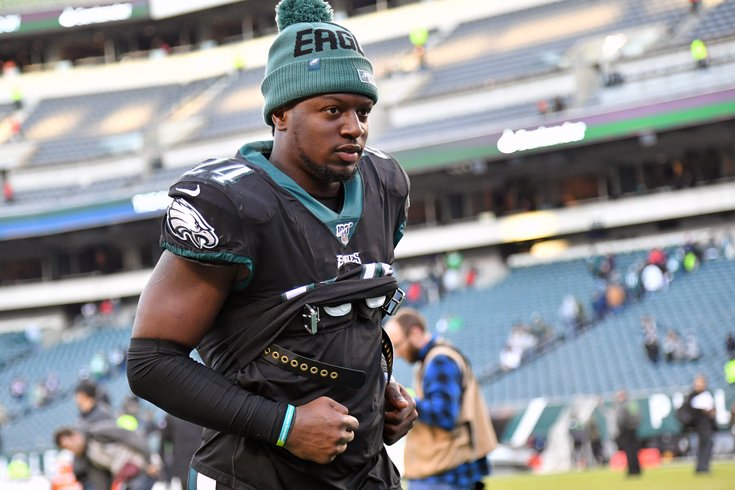 Jordan Howard is scheduled to have the right half of his body amputated. Maybe.

When the Philadelphia Eagles released their final injury report on Saturday, DE Derek Barnett, RB Jordan Howard, and WR Nelson Agholor were all listed as questionable. None of them will play against the New York Giants Monday night.

Here are the Eagles-Giants inactives, with analysis.

• DE Derek Barnett: Barnett had a good game in Miami last Sunday, and has had a nice season overall. If he cannot go, that would be a missed opportunity against Giants LT Nate Solder, who is in decline and has struggled this season.

• WR Nelson Agholor: Agholor appeared on the injury report a week ago with his knee injury, but played against the Dolphins, and actually made a few positive plays.

• RB Jordan Howard: If Howard can't go in this game (and he has not yet been cleared for contact), it will be his fourth straight missed game, plus the bye week. Doug Pederson said on Thursday that he does not believe it is a season-ending injury.

• DE Shareef Miller: Miller can't crack the lineup with Barnett out, and only three healthy scratches. That's not encouraging.

• OG Sua Opeta: Opeta was brought up from the practice squad this week.

• iOL Nate Herbig: Herbig has not yet been active for a game this season.

As you already know, Eli Manning is filling in for Eli Manning this week. We'll update the Giants' inactives when they are made available.

Oops, almost forgot to update this. Here they are:

• LB Ryan Connelly (IR): Connelly is a rookie linebacker who was off to a great start, when he tore an ACL and his season was over. In four games to begin the season, Connelly had 20 tackles (2 for loss), a sack, 2 INTs, and he contributed on special teams.

• WR Russell Shepard (IR): Shepard had 3 catches in 3 games before going on IR with a left foot sprain.

• LS Zak DeOssie (IR): This is the guy Jason Avant destroyed on DeSean Jackson's Miracle at the Meadowlands II (or III) walk-off punt return TD. This would be a penalty in 2019:

DeOssie is still in the league, apparently. The Giants' replacement long snapper is Colin Holba, who wears No. 69.