Hugh Douglas, Trent Cole to be inducted into Eagles Hall of Fame 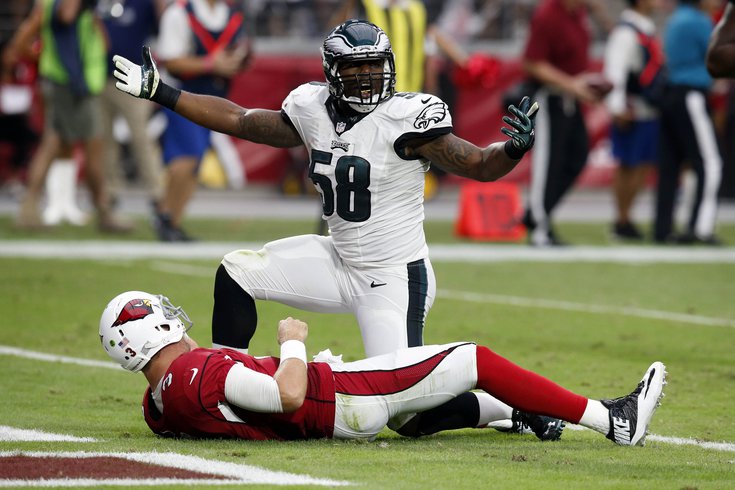 Trent Cole was second in Eagles history with 85.5 sacks.

A couple of defensive ends crucial to the Eagles' success in the 2000s will be entering the team's Hall of Fame this November.

At halftime of Friday night's preseason game against the Jets, team owner Jeffrey Lurie announced Hugh Douglas and Trent Cole as the 2022 inductees for the Eagles' Hall of Fame.

Douglas played for the Eagles from 1998-2002 then returned for the 2004 Super Bowl run after spending the season before in Jacksonville.

With 54.5 sacks during his time in midnight green, including a single-season high of 15 in 2000, Douglas was a key fixture of those Jim Johnson defenses in the early part of the century that helped build the Eagles into perennial contenders.

But his impact, Lurie said Friday night, went beyond the field.

"He brought an energy that permeated the team," Lure said. "Whether it was firing up his teammates before taking the field or providing a moment of levity when it was needed, Hugh always delivered."

Cole was a fifth-round pick by the Eagles in the 2005 draft and went on to spend a decade in Philadelphia as a constant threat on the defensive line. He was a consistent part of the team from the late 2000s and into the mid-2010s as the team went into the latter half of the Donovan McNabb-Andy Reid era and then eventually into the first two years of Chip Kelly.

"I always felt the rest of the league underrated Trent," Lurie said. "But we knew he was a player who altered games with the way he dominated at the line of scrimmage."

Douglas and Cole will be honored at halftime during the Eagles' Week 12 Sunday Night Football matchup against the Packers on November 27. Mark your calendars.