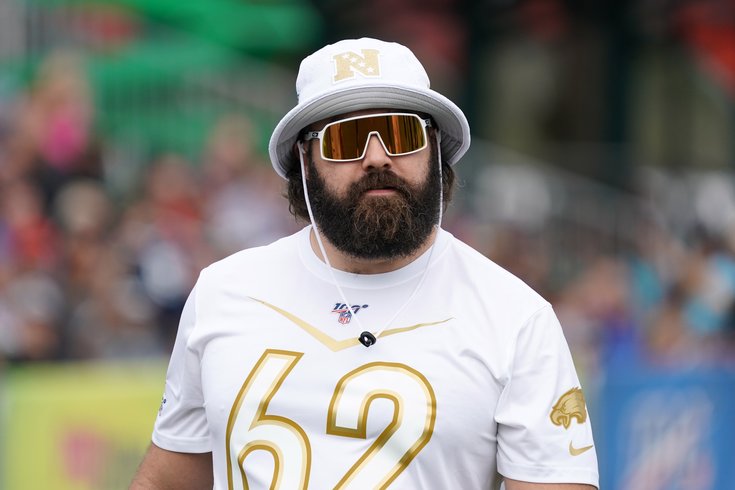 Eagles' center Jason Kelce is a fan favorite and he was seen over the weekend arm-wrestling a Havertown resident at a Delaware County bar while wearing a Delco shirt.

Philadelphia Eagles center Jason Kelce is a fan favorite. His three All-Pro and Pro Bowl appearances during his nine-year career in Philadelphia have certainly helped his case, but it was his epic profanity-laced speech at the Eagles’ Super Bowl victory parade while wearing a Mummers costume in 2018 that solidified his legend status in here. Marching with the Mummers in Manayunk in 2018 certainly helped out too.

On Sunday, during the President's Day holiday weekend, the 32-year-old Kelce was hanging out at Brick & Brew bar in Havertown wearing a Delco shirt. And he wasn’t just there to hang out and have some food or drinks; he was spotted arm wrestling with a Havertown resident at the bar.

The man in the hot seat was Dave Griffin, according to multiple reports. Griffin happened to be at the same bar as Kelce, and he decided to give Kelce a run for his money in an arm-wrestling battle.

Watch the arm-wrestling match between Kelce and Griffin below, which was posted on Twitter by Griffin’s sister-in-law Julie Smyth Garling.

First and foremost, credit has to be given to Griffin for stepping up to the plate and giving it a shot against a starting center in the NFL. That’s a lot easier said than done, and most wouldn’t be up for the challenge against an offensive lineman.

Griffin hangs tight for a few seconds before Kelce overpowers him, even shaking the table with his strength. In the background of the video, almost everyone near Griffin and Kelce at the bar can be seen watching the two go at it, including the couple seated directly next to them.

Now we wait and see if Kelce will return for his 10th season in Philly in 2020.