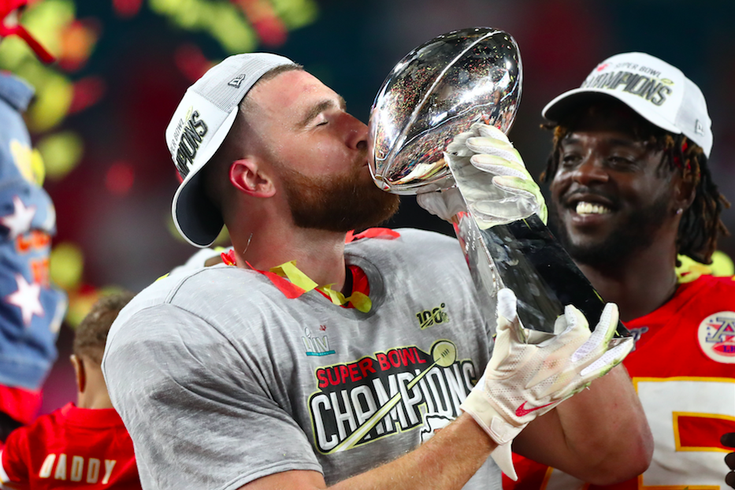 Every element played out to perfection: the Mummers attire, the hoarse voice, the right dose of expletives and the cadence of his roll call of all the Eagles who contributed to the city's first Super Bowl title.

On Wednesday, Kansas City Chiefs tight end Travis Kelce had his opportunity to take the stage and celebrate his team's victory in Super Bowl LIV. Here's how he approached it (in a WWE championship belt).

This speech by Travis Kelce is everything you thought it would be and more: pic.twitter.com/xYwmnygXuF

There are some similarities between the two. The Chiefs hadn't won a Super Bowl in 50 years. They had to overcome deficits in three straight games. Travis Kelce was drunk. His voice cracked a bit.

Philadelphia knows that nothing holds a candle to Jason Kelce's speech, but there's no need to compare his brother's performance to that lofty standard. Some fools in Kansas City would like to try, yet we can forgive them for being drunk and falling out of trees. They've earned it.

The Voice of the Chiefs throwing shade at Philly at the parade “hey Philly..you don’t even have the best Kelce. We got it”

For what it's worth, the Kelce brothers were never too concerned about whose speech would be better.

“Listen, I’m just trying to one-up him in terms of getting a Super Bowl ring first,” Travis told Chiefs Wire before Sunday's game. “I’ll worry about the parade if I ever get to enjoy one.”

After the game, Jason was asked if he'd give his brother some pointers.

"This man don’t need no advice,” he said. “He’s his own man and he’s up here hoisting the Lombardi Trophy because he’s the best in the game. And he’s gonna have the best speech… next to mine!”

What really matters at the end of the day is that this completely disproportionate bobblehead exists.