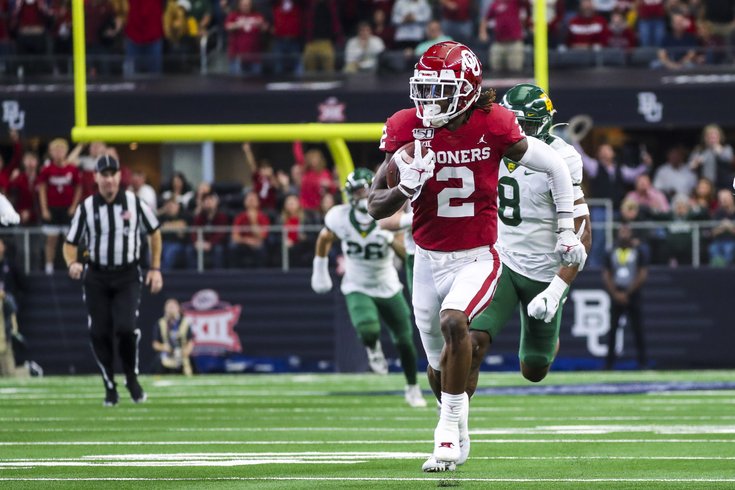 I wouldn't get your hopes up on the Eagles drafting CeeDee Lamb.

On Monday, we published our second Philadelphia Eagles only mock draft of the offseason, which we're proud to announce has already won three Pulizers. Today we'll take a peek around at some of the national guys and see who they have going to the Birds at 21st overall.

Speed! The Eagles are focused on getting faster this offseason, and Ruggs is the most explosive player in the draft.

#JimmySays: Ruggs would indeed be a great fit for the Eagles' offensive needs, but I don't think he'll make it to 21.

Lamb has the ability to play inside or outside and is an instant playmaking option who should help alleviate pressure on Carson Wentz.

#JimmySays: Lamb is my favorite wide receiver in this draft. If I didn't think Ruggs will be there at 21, I really don't think Lamb will be there.

Big-bodied offensive weapon with a diverse set of skills as a pass-catcher/playmaker.

#JimmySays: I love Shenault as a player, and if he didn't have a long injury history, I'd be all over him at 21.

Carson Wentz is in need of more reliable targets. Aiyuk's speed and quickness will make him a playmaker in the NFL.

#JimmySays: This was a three-round mock, and Reuter had S Antoine Winfield Jr. going to the Birds in Round 2, and C Tyler Biadasz going to them in the third, both of which would be perfectly cromulent picks. We'll get to Aiyuk in a minute.

Zero Eagles receivers found their way to 500 yards in 2019, Nelson Agholor is a free agent, Alshon Jeffery will be 30 in two weeks and J.J. Arcega-Whiteside had a limited 10-catch impact in his rookie campaign. Carson Wentz likes to air it out, but he didn't have the right personnel to do so. Coach Doug Pederson thought he had an answer in the vertical game with DeSean Jackson, but an abdominal injury limited the veteran speedster to 62 snaps. Ruggs, though, is a human torch -- he could run in the 4.2s at the combine -- and immediately gives Wentz a weapon in the pass game outside of Zach Ertz, Dallas Goedert and Miles Sanders.

#JimmySays: If he runs in the 4.2s, he definitely won't be there.

MORE: Report: Eagles to make changes to their medical staff once again | Your team's first round picks since 2010, if Mel Kiper's initial mock drafts were perfect

Philadelphia has to upgrade at wide receiver -- its two top pass-catchers in 2019 were tight ends Zach Ertz and Dallas Goedert -- and the depth and talent in this class could set up perfectly for the Eagles to have several options here. At 6-foot-4, Higgins is the biggest wideout of the first-round talents, a jump-ball specialist and touchdown machine (25 the past two seasons). He's not super explosive like Lamb, Jeudy or Ruggs, but he'll box out cornerbacks in the red zone and pick up first downs, not unlike Alshon Jeffery, who struggled to stay on the field this season. The Eagles would have liked more from second-round pick J.J. Arcega-Whiteside in Year 1, and I still like his upside, but Higgins has No. 1 receiver talent. As is always the case for Philadelphia, this is another spot to watch for an edge rusher.

#JimmySays: I'm fine with the pick, but I don't like Kiper's description of the player, who is made out to sound like a clone of Alshon Jeffery or J.J. Arcega-Whiteside. Personally, I don't view Higgins that way, as I see him as a down-the-field playmaker with much better athleticism than either Jeffery or JJAW.

The Eagles are in desperate need of a big-play threat in Carson Wentz's receiving corps given DeSean Jackson's age and an equally breaking-down Alshon Jeffery. Higgins is a dangerous, all-around playmaker who can be a force in the red zone. At 6-4, 215 pounds, he posted 59 receptions for 1,167 yards and 13 TDs in 15 games. He also rushed for a 36-yard score against LSU.

#JimmySays: Ah, that's a little closer to how I would describe him.

Aiyuk could run in the high 4.3s at the combine and exhibited the ability to make hands catches away from his frame at Arizona State. He's over 6-foot with elite speed, so the Eagles love how well-rounded he is.

#JimmySays: I originally had Aiyuk as my first-round pick in our Eagles-only mock draft, version 2.0, but decided to hold off until I see what he runs at the Combine. I love him as a player, but I need to have that question answered for me first.

The Eagles were hobbled by injuries in the secondary and they'll aim to fix that in the offseason. Henderson is long, fast and athletic and while he hasn't been quite as productive this season, he has all the traits NFL teams look for in lockdown CBs.

#JimmySays: Right now, yes, this would be a fine pick if the draft occurred before free agency. However, the Eagles are highly likely to sign two starting corners in free agency, and I think the better value at corner is in Rounds 2 and 3.

Philadelphia could essentially lose everyone in their wide receiver room this offseason. Frankly, it would not be much of a loss. Higgins is a big receiver with some injury concerns but big-time talent.

#JimmySays: Huh? DeSean will almost certainly be back, and Arcega-Whiteside definitely will be.

It is no secret that the Eagles will be looking to add speed on both sides of the ball this offseason. And in this scenario, they jump ahead of the Raiders and Jaguars to secure one of the most explosive pass-catchers in the draft. Aiyuk has speed, length and playmaking skills that would immediately pay dividends in Philadelphia. The structure of this trade would be very similar to last year’s when the Eagles jumped up a few spots to nab Andre Dillard.

#JimmySays: To note, there was a trade up involved here. The Eagles moved from 21 to 18.

No. Way. If they're making a modest move up for Lamb, Jeudy, or Ruggs, then sure. But three draft picks spent on a player who will probably be there anyway at 21, after the Eagles only had 10 picks combined the last two years? That would be malpractice.

Even though K'Lavon Chaisson is listed as an OLB here, the Eagles would see him as a D-End. SIDENOTE: save your expletive-laced WR-rants until you see my RD2 and RD3 selections. Over the past few years, the Eagles have targeted college production over athleticism, potential, and speed. The result: the Eagles are now a slow and rather un-explosive team. Chaisson may need to work on building a pass-rush repertoire, but he's a long, fast, explosive guy who's in a different class athletically than Derek Barnett or Brandon Graham.

#JimmySays: I love you, Brozer, and I'm with you on the need to get faster roster-wide, but right or wrong, you and I both know they're not taking an edge rusher with fewer than 10 career sacks in the first round.

The team didn't use a pick on a safety in the last draft but rectify that this time around. Corner may be a bit more pressing a need but it's hard to bypass Delpit, who was phenomenal down the stretch run to the national title and won the Thorpe Award as the best defensive back in the country. While most see his big hits, he's much rangier than people give him credit for when healthy.

#JimmySays: The Eagles have never drafted a safety in the first round, and I don't see that changing in 2020.

Aaaaaand just for the hell of it, I fired up a the "On the clock" simulator, and wound up with this insanely unrealistic haul. 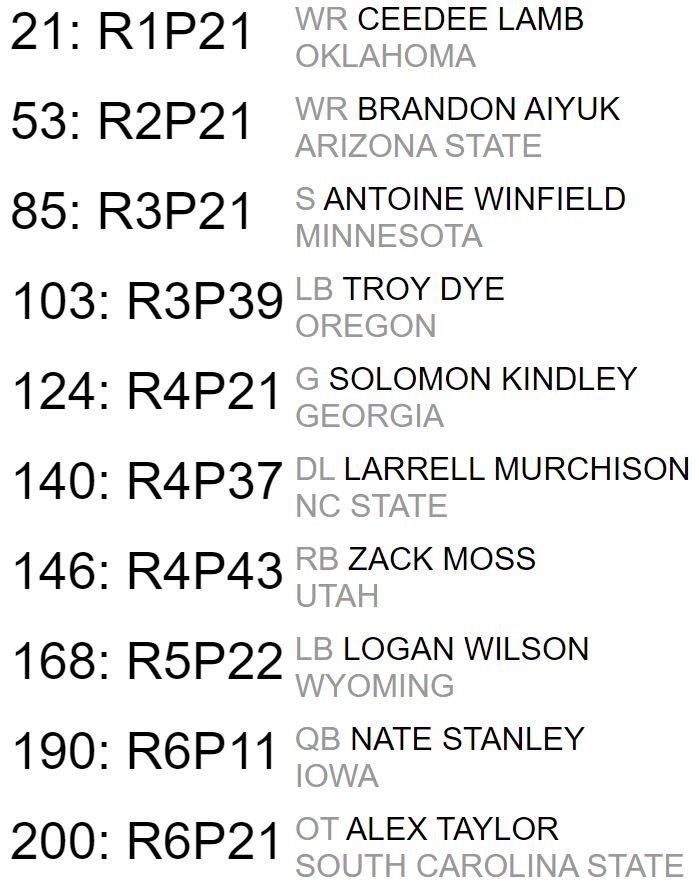