Report: Eagles to make changes to their medical staff once again 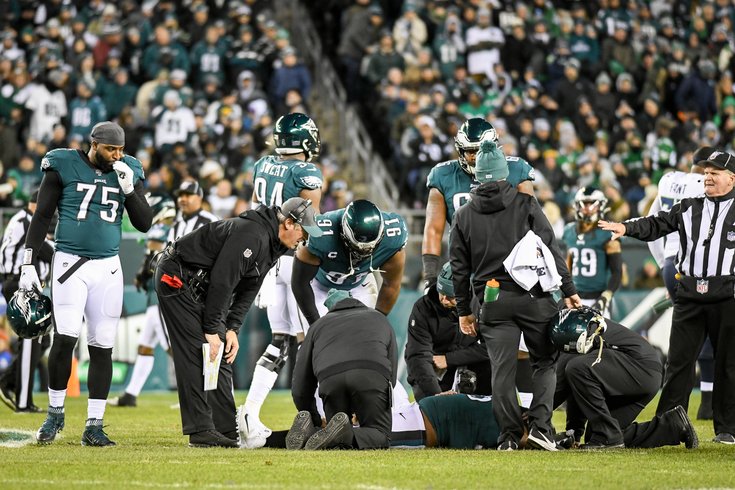 Doug Pederson and the Eagles medical staff checking on an injured Brandon Graham during the Philadelphia Eagles wild-card game against the Seattle Seahawks.

To anyone who has been watching the Eagles play over the last few years, this probably won't come as any shock to you — but Philly has been one of the most injured teams in the NFL over the last two seasons. What makes matters even more troubling is the fact that the Eagles just went through a massive overhaul of their medical staff following the 2017 Super Bowl season, and in the two years since, they've gone from one of the healthiest NFL teams to among the league worst in terms of games missed due to injury.

Now, with a desire to not only get younger on the field, but also healthier (the two tend to go hand-in-hand), the Eagles will reportedly make even more changes to their medical staff. According to Jeff McLane of the Inquirer, the Eagles will not renew the contracts of two members of their sports science staff — Shaun Huls, director of high performance, and Shireen Mansoori, director of rehabilitation — and will instead let them go as they look for their replacements.

Huls had been on the staff since Chip Kelly hired him in 2013 as part of the then newly created sports science department, and Mansoori has only been working with the Eagles for two seasons, but at least one player went to bat for her on Tuesday after news of her departure came out.

Jalen Mills on Shireen Mansoori: "Shireen really cared about me and my injury. She wasn't trying to rush me back out there on the field. The bond between us turned from a physical therapist-player one to that of really good friends." #Eagles

There were others, however, like former linebacker Emmanuel Acho and safety Earl Wolff, who took to Twitter to voice their disdain for the Eagles medical staff.

The #Eagles have had 3 medical staff change ups in 3 offseasons...

Ive had knee pain each and everyday since my initial knee injury in 2013. Some days are better than others but it’s been a fight everyday of my life. It sucks https://t.co/YhibIYEP3S

For the Eagles, this marks the third season in a row that the Eagles have undergone big changes within their medical staff, and unlike the first two moves, this one seems like more of a reaction to all the injured players over the last two seasons than a proactive measure to ensure the players are in the best possible hands.

Fresh off their Super Bowl win two years ago today, the Eagles parted ways with their two top doctors and head trainer in a move that was somewhat shocking at the time. Here's more from McLane on that move and the ensuing struggles the team has had staying healthy:

The Eagles, after their first Super Bowl championship in franchise history two years ago, severed ties with their top two doctors, head physician Peter DeLuca and team internist Gary Dorshimer, and their head trainer, Chris Peduzzi. The three had approximately a combined 60 years of experience with the Eagles.

After their departures, the Eagles went from being one of the healthiest teams in the NFL to one of the most injured. From 2013-17, they ranked first, fifth, sixth, fourth and 11th in the league in games lost to injury, according to Football Outsiders. In 2018, they finished last, and while the numbers for 2019 have yet to be calculated, the Eagles are expected to finish near the bottom again.  [inquirer.com]

Of course, football is a violent sport and it's impossible to pin all those injuries on the Eagles medical staff. Some injuries, like torn ACLs or Achilles' tendons are just going to happen, no matter how much you try to prevent them. The same can be said for the kind of contact injuries — broken/dislocated bones, bruises and, of course, head injuries — that often result from constant tackling and big hits. But it's those in-between injuries, the ones that affect the players' soft tissue, like DeSean Jackson's abdominal injury, where the Eagles have really been hurt in past years.

And the Eagles haven't done themselves any favors, bringing back several aging veterans and players with injury histories last year only made it more likely that they had guys missing time with injuries.

In his end-of-season press conference, Howie Roseman hinted that there may be changes coming, not just to the medical staff but to their front office philosophy as well.

"One of the things that obviously has been an issue for us has been the injury situation," Roseman said back on Jan. 8. "When we look at the last three years, in 2017, we were able to overcome it. The last two years, the injuries have really hurt our football team. There is a part of that that is natural during the game. Injuries are going to happen.

"But we have to figure out a way to get better here. We can help from a front office perspective by looking at the players that we bring in. Hope is not a strategy when it comes to injuries. When you bring in guys that are injured, it obviously increases the risk that they will get hurt again."

According to McLane, however, the medical staff has been just as culpable as the front office and Father Time, if not more so:

While age and history likely played some role, the medical staff turnover and lack of experience in the replacements have factored as much if not more in the Eagles’ injury woes, team and league sources close to the situation have said.

The Eagles replaced DeLuca and Dorshimer, in essence, with Stephen Stache and Christopher Dodson. While Dodson had some experience with Eagles, Stache did not. He spent less than one year with the team, and the Eagles brought in Arsh Dhanota as their chief medical officer during the 2019 offseason.  [inquirer.com]

That last name is an important one. Last June, the Eagles hired Dhanota, who had worked with the Flyers and Sixers but had no NFL experience, to oversee their medical operation. This season, his main role was as an observer, where he reportedly sat back and took note of how the Eagles handle that side of the organization in order to formulate a better plan of attack moving forward.

"We have hired a new chief medical officer," Roseman explained earlier this month. "This is someone that we are very, very excited to have. He came in in June and what he asked for us was that he would observe, observe through the season, observe our training staff, observe our weight staff, our sports science, our processes, and make recommendations to us that we would carry out. So we're excited about that."

Now, just over a six months after his hire, the Eagles are already making changes to their medical staff, and according to McLane, more changes could be coming.

I guess we can add these to the growing lis of hires the Birds need to make this offseason.