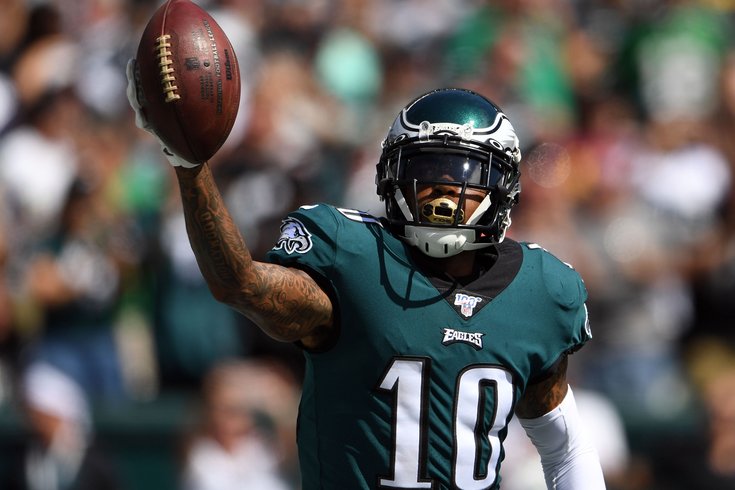 The Philadelphia Eagles will head into Week 5 very banged up, as usual. However, for a change, their opponents this week, the New York Jets, are dealing with more devastating injuries.

• CB Ronald Darby (hamstring): Darby should be out for about a month with a hamstring injury, after he struggled early in the season while trying to come back from a torn ACL.

• DT Timmy Jernigan (foot): Jernigan became a starter when Malik Jackson was likely lost for the season with a Lisfranc injury Week 1. Jernigan is expected to be out for more than a month.

• TE Alex Ellis (knee): The Eagles score touchdowns seemingly every time Ellis is on the field, so his absence is obviously a huge loss.

• CB Sidney Jones (hamstring): The Eagles only have three other active corners, which leads me to believe that Jones will be active on Sunday. If he starts, I would expect the Jets to test him early and often.

UPDATE: The Eagles brought up CB Alex Lewis from the practice squad, which lowers the probability that Jones will be active.

• DT Malik Jackson (IR): Originally, the loss of Jackson hurt most when the Eagles forced obvious passing downs, as the Eagles don't have a clear replacement for him in those second-and third-and-long situations. In the base defense, however, Jernigan was a capable replacement who played well Week 1, after missing almost the entirety of the 2018 season with a mysterious back injury. With Jernigan now out as well, the Eagles are digging deep into their DT depth, and they'll need guys like Hassan Ridgeway and Akeem Spence to step up, which they have not yet done.

• QB Sam Darnold (illness): Adam Gase ruled Darnold out for this game earlier in the day. He has not yet been cleared for contact, as his spleen is enlarged as a result of having mononucleosis. If his enlarged spleen were to take a big shot, it could rupture, and Darnold could die. Understandably, Darnold would prefer not to die.

If his spleen is still enlarged, he can’t play because he could die if he’s hit in that area and it ruptures

“I want to make sure that I’m safe out there and I'm not going to die” 👀 pic.twitter.com/GrIXIswUIy

• OLB Jordan Jenkins (calf): Jenkins is a starting edge rusher who had 7 sacks last season. The Jets have a boatload of injuries to their linebacking corps, as you'll see below.

• LB C.J. Mosley (groin): Mosley was a high-priced free agent acquisition of the Jets this past offseason. He had six tackles and a pick-six in the only game in which he has appeared this season, a Week 1 loss to the Bills.

• DT Quinnen Williams (ankle): Ultra-talented first round pick (3rd overall) of the Jets in the 2019 NFL Draft. Like Mosley above, Williams has only appeared in one game so far this season.

• WR Demaryius Thomas (hamstring): The Jets traded a pick to the Patri*ts for Thomas, who has not helped yet. He has 1 catch for -1 yard.

• WR Josh Bellamy (shoulder): No. 4 type of receiver with special teams ability who, if healthy, would be forced into a bigger role.

• TE Daniel Brown (ankle): The Jets are already without starting TE Chris Herndon due to suspension, as noted below.

• QB Trevor Siemian (IR): Siemian started in place of Sam Darnold after Darnold's mono diagnosis, but in the first half against the Browns Week 2, Siemian suffered a gruesome ankle injury and is done for the season.

• WR Quincy Enunwa (IR): Enunwa missed the entire 2017 season with a bulging disk in his neck. In 2018, he missed five games with injuries to each of his ankles. In 2019, he's done one again for the season after just one game with a neck injury. Enunwa was a starter, and a bigger receiver with some YAC ability.

• TE Chris Herndon (Suspended): Herndon was suspended four games by the league for violating the NFL’s substance abuse policy. As a rookie in 2018, Herndon had 39 catches for 502 yards and 4 TDs.

• LB Avery Williamson (IR): Williamson started all 16 games for the Jets last season, racking up 120 tackles, 3 sacks, 2 forced fumbles, 6 pass breakups, and an interception. Good player. Williamson tore his ACL in the preseason and is done for the season.

• LB Brandon Copeland (Suspended): Copeland is suspended for four games for violating the NFL policy on performance-enhancing substances. He played in all 16 games for the Jets last season, starting 10. He had 35 tackles, 5 sacks, and 14 hits on the QB.

• DT Nathan Shepherd (Suspended): Shepherd was suspended for six games for two separate violations of the performance-enhancing drug policy. As a rookie in 2018, he played in all 16 games, starting 5. He had 15 tackles, no sacks.