Week 5 NFL picks: Rounding up the experts' predictions for Eagles vs. Jets 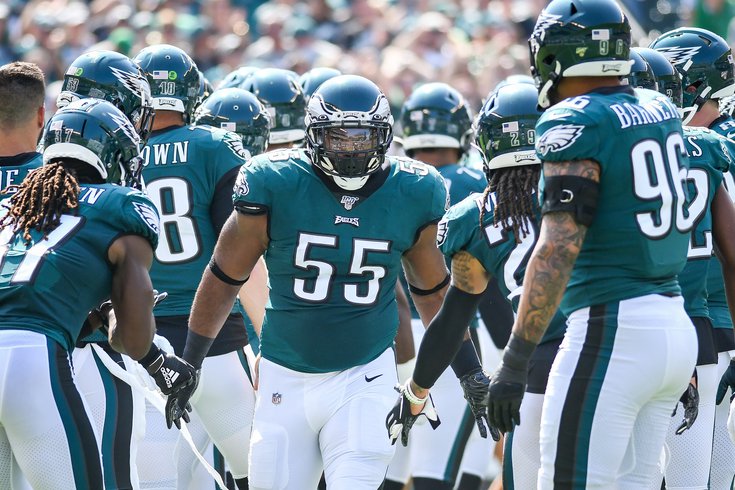 Defensive end Brandon Graham runs onto the field before the Eagles-Lions game at Lincoln Financial Field.

Football is funny sometimes. Last week, nearly everybody was picking the Packers to take down the Eagles on Thursday Night Football, and we all saw how that turned out. This week, with the Birds welcoming the winless Jets, who will be without starting QB Sam Darnold for another week, into the Linc on Sunday, it's been quite the opposite.

In part because of what they showed in that win over Green Bay, and in part because the Jets are just a bad football team, it's difficult to find anyone picking against Philly. Trust us, we tried.

And with Sam Darnold now officially ruled out, it's unlikely anyone will be flipping their prediction to the Jets.

We've broken down the injuries, given you some matchups to watch and offered our own predictions for Eagles vs. Jets. Now, as we do every week, it's time to take a look around the nation to see how various experts, both local and national, see Thursday night's matchup playing out.

• PhillyVoice staff: It what is surely going to be a common theme today, each of our writers picked the Eagles to take care of business against the Jets. Here's a look at what Kyle Neubeck, who predicted the closest finish (28-17) of anyone at PhillyVoice, had to say:

At the risk of sounding overconfident about a team I have been wrong about quite frequently already this season, I can’t see this team losing to an opponent being quarterbacked by Luke Falk. I would only be mildly more concerned if Sam Darnold and his spleen are able to play after a mono-induced layoff. Even an injury-plagued secondary should be able to be good enough to get it done.

Last week felt like a possible turning point for the Eagles, with contributions in every phase helping to secure a tough victory on the road. With the Eagles about to embark on a brutal stretch of games, securing this win is critical.

• ESPN staff: All 10 of their national experts are going with the Eagles over the Jets.

1) If the Eagles don't hit the quarterback Sunday, it's time to worry about the defensive line. Defensive coordinator Jim Schwartz doesn't trust his shaky secondary, so he barely blitzes, but even Fletcher Cox and Brandon Graham are struggling to get home. 2017 first-rounder Derek Barnett hasn't stepped up and injuries have sapped the group's depth.

2) It's ironic that an analytics-minded team like the Eagles turned their season around because they ran well and stopped the run in Green Bay. Running backs Miles Sanders and Jordan Howard can stop GM Howie Roseman from trading for help if they keep playing well. Look for a more pass-happy approach this week with matchup advantages against the Jets' secondary.

3) Sam Darnold's status is a mystery, but what about the other Jets first-rounders off to slow starts? Leonard Williams has not played well in Gregg Williams' scheme and No. 3 overall pick Quinnen Williams is expected to return after missing two games for a squad surprisingly ranked No. 12 in defensive efficiency.

• CBSSports.com staff: All eight of their NFL experts are picking Philly to take down the Jets, including Pete Prisco, who sees a comfortable 30-14 win for the Birds:

It looks like it will be Luke Falk at quarterback for the Jets again with Sam Darnold still battling mono. That's not a good thing. The Eagles seemed to right things against the Packers and that will carry over here. Eagles take it.

MORE: Eagles vs. Packers: Predictions, odds and more for Week 5

• OddsShark: Each of the last two week, their projection has been quite wrong. Let's hope that changes this week as they're picking the Eagles by three scores.

The Eagles are poised to make a move, especially once they get DeSean Jackson back.

At least until Sam Darnold returns, the Jets are in the same range as Miami, Washington and Cincinnati as such brutally bad teams I’d pick them only against each other.

Throw in that Jets star linebacker C.J. Mosley is still dealing with a groin injury (which at least counterbalances some of Philly's injuries) and it's hard to justify taking even 13.5 points with Gang Green.

• Sheil Kapadia, The Athletic: Former Eagles beat writer Sheil Kapadia is now making picks against the spread for every game over at The Athletic. This week, he thinks the Eagles not only win, but also cover that massive 13.5-point spread.

The Eagles seemed to figure some things out offensively in last week’s win over the Packers. The defense, though, may be another story. The Eagles could go into this game without four of their top five cornerbacks: Ronald Darby, Jalen Mills, Sidney Jones and Avonte Maddox. And there have been no signs that the defensive line can make up for the injuries on the back end. The Eagles have produced a sack or QB hit on 12.64% of their opponents’ pass plays. That’s the second-worst mark in the league. The good news is that the Jets offense has been terrible. But it actually sounds like as of now, poor Sam Darnold, who has been getting bombarded with questions about his spleen, will play in this one.

• SBNation staff: Again, it was another clean sweep as the all 10 of their experts are picking the Eagles to win.

• Bleeding Green Nation staff: Nine writers made picks, and all nine of them picked the Eagles.

• Inquirer.com: All three of their beat writers picked the Eagles to beat the Jets, including Les Bowen, whose prediction sounds more like an ominous warning.

... This is a team that has trailed by double digits in every game it has played this season, which is just absurd, for a contender. The Jets’ defense might be good enough to keep them in it. Though somehow the Eagles, who might be starting Craig James at cornerback, are favored by 14 points, against a team that only lost to New England by 16.

But I don’t really see Sam Darnold making a miraculous recovery from mononucleosis and leading the Jets franchise to its first-ever victory over the Eagles (0-10, of course not counting the annual fourth preseason game spectacular). If Darnold or Luke Falk even keeps the Jets close, it might be time to stop kidding ourselves about what the 2019 Eagles are. ...

• NJ.com staff: All eight of their writers are picking the Eagles, and instead of focusing on what their Eagles writers are saying, let's take a look at how their Jets beat writer, Matt Stypulkoski, sees this game playing out.

The Jets are almost as banged up now as they were before the bye week, which is stunningly bad luck. Worse yet? Their bye-week advantage is more or less offset by the fact that the Eagles have a long week of prep, too, after playing last Thursday night. Tough to see an inferior Jets team picking up a win on the road in this one.

The bye helped, but one week wasn't enough for the Jets to get Sam Darnold back from his illness in time for this game. That means Luke Falk is up against the same (albeit still banged-up) defense that just gave Aaron Rodgers and the Packers some trouble. Le'Veon Bell can't do everything for New York, especially in Philadelphia. The Jets will need to come up with more takeaways to have a chance, but the Eagles can afford to be careful with the ball as their offense gets closer to full strength.

The Eagles get a mini-bye to match the Jets having Week 4 off. Sam Darnold doesn’t look ready for Gang Green, while Philly found its running game to buoy Carson Wentz last week and should be a lot healthier at wide receiver. The Jets’ secondary can’t handle Wentz spreading the ball around, and the Eagles’ offensive line, coming off a great game, will have an easy time against a limited pass rush. This will be a win that resembles what the Eagles got for most of their Super Bowl run in 2017.