Eagles mailbag: A lot of folks are (rightfully) concerned about the secondary 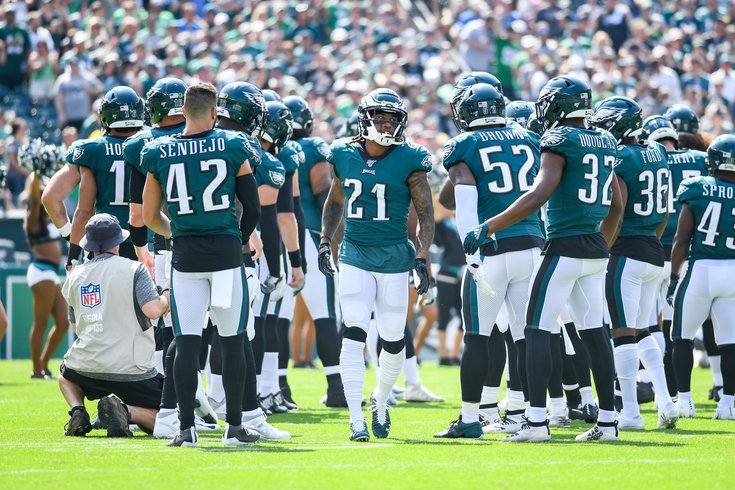 Eagles cornerback Ronald Darby is introduced before facing the Lions.

Jimmy, before Andrew Sendejo decided to decapitate our most promising young DB, Avonte Maddox was getting exposed badly. My assumption is that he is better suited as slot corner or safety because he looked lost on the outside. Was his poor play more a matter of playing out of position or that he was playing so far off to try not to give up the big play to Davonte Adams?

To begin, I agree with you that his best spot is in the slot. He's 5'9. There's just aren't many 5'9 guys playing on the outside in the NFL. That said, he's quick, shifty, and despite his size, he's physical, and confident.

You don't want him to have to play on the outside, if you can help it. That said, I don't think he was awful last Thursday, especially given the circumstances. Jim Schwartz said a few days after the game that Maddox hadn't gotten reps on the outside since training camp, so we're talking about well over a month there. And then mid-game, he's told, "OK, Avonte, go man-up against a receiver on the fringe of 'top 5 WR' status."

Did he give up some plays? Of course he did. I thought he also battled, and made some nice plays as well.

(Also, my apologies to the person who asked this question. I accidentally deleted it out of the chat after I copied and pasted it here, and did not see who asked it.)

Question from Jarrad: I think a late 5th round comp pick is unlikely to become better than a marginal back up. But the value of recouping the pick gives the Eagles more assets to work with in trades. The Patriots are excellent at accumulating picks to give them flexibility to maneuver the draft board or in pick swaps. I had slight hopes for him to start the season but see ya Sendejo!

To begin, for those of you who follow my obsessive compensatory pick coverage, you'll know what Jarrad is talking about when he's referring to the Eagles getting a fifth-round comp pick for the release of Sendejo, as opposed to a fourth. Apparently, it'll be projected as a fourth again soon:

This reopens a comp pick to the Eagles for Golden Tate.

Note that he's currently valued as a 5th, but that's due to lack of snaps from his suspension. He could return to a 4th as soon as after this week. https://t.co/Z8lmiNmQMI

Anyway, a common thing I hear from the Sendejo stans is how useless fourth- or fifth-round picks are, and they'd rather just have the player. Even if that's the logic (that I don't agree with, for the record), you know who does value mid-round picks? OTHER TEAMS!

For example, the value of utilizing draft picks to move up and down in the draft aside, at the trade deadline last season, Ha Ha Clinton-Dix got dealt for a 4. I'll take a player like Clinton-Dix, who actually has NFL skills, all-day-every-day over a player like Sendejo, whose only real value (if you'd call it that) is his complete disregard for his own safety and that of the other players on the field, teammates included.

Question from Bourtbarian: Is there anything to be done about the incessant secondary injuries? What's the probability that this team gets injured at that position so thoroughly 2 years in a row strictly by chance?

Last year I think they were unlucky. They don't get a pass this year. Ronald Darby and Jalen Mills were injured, and it feels like the team may have miscalculated when they would be back to 100 percent (or close enough to it), while Sidney Jones was always going to be an injury risk. And now they're right back where they were a season ago.

Question from @F1YEAGLESF1Y: Will the Eagles have a pick in the first round of the 2020 draft?

Question from Chris: Do you expect the team to make a significant trade during this season much like the previous two? Seeming like Jalen Ramsey isn't going to happen but who do you suspect we may go after?

I do think they make a noteworthy trade, and by that I mean, "not necessarily a blockbuster, but not exactly Johnathan Cyprien for Duke Riley."

I would say that CB is the most likely, with DT not far behind. Personally, if an opportunity arises in which a DE becomes available, I think that should be a high priority as well, but my perception is that the Eagles don't see it that way.

On Thursday we looked at the six teams who are already highly likely to be sellers at the deadline, and the players those teams have that might make sense in trades. As more teams clearly enter that "seller zone," we'll look at their players as well.

Question from Mark: Can we change the definition of "hurries" and "pressures" so they don't get counted if the QB throws the ball for a first down? Those numbers are meaningful if they reflect the defensive line pressuring the QB into throwing the ball away or making a bad throw. If the QB can still chuck the ball for a 20 yard completion, they're just empty numbers.

I’m increasingly tiring of hearing about “pressures” as well. There was a time when fans looked at sacks as the end-all, be-all of pass rusher success, which was unfair to some players who legitimately affected the quarterback consistently without necessarily getting home.

However, my issue with “pressures” is two-fold:

Comment from Ross: Jimmy, this team is headed to the playoffs, and this is a really good team. Let me tell you why.

Eagles beat (Washington). It was a laboured win but it was a win. The sign of a good team is when they play badly and win. They played badly and won that game.

Eagles lose to Falcons. Played badly but everyone went down injured and could’ve won with the backups on offense. It was real close and it was one that if it had happened later in the season, the rookie and the backup WR who hasn’t played in over a year could’ve pulled a bit more out the bag.

Against the Lions, they lost at home but again it was a close one in the end, and players leaving the field left, right and centre continued. Hardships were there.

The Packers game is an incredibly impressive victory. On the road, vs. Aaron.

So this team has shown a great deal of depth early on. A great deal of resilience. A great deal of adaptability. There is a massive Achilles heel with the secondary - but that’s not new, is it? They’ve suffered that for years now. Even whilst winning the thing, we allowed 500 yards in the Super Bowl. It needs adding to. It needs managing. But this team is legit. They have players coming back from injury and early involvement for others will be a good thing in the end.

The Cowboys will lose to Rodgers. They will beat the Jets. Suddenly it’s game on.

This is a time to be excited.

Obviously from the spelling of some of your words above, you are from the other side of the pond, and I enjoyed reading your comment in my head with a British accent. Twice, ha.

I also largely agree with the sentiment. We covered a lot of the concerns in the chat above, but big picture, it is still a very good team, in my opinion. They'll be fine, and in my opinion, barring more injury carnage, it's hard to see a route in which they don't make the playoffs. They aren't the Phillies or the Flyers. Don't forget to enjoy the ride while the team is still good.