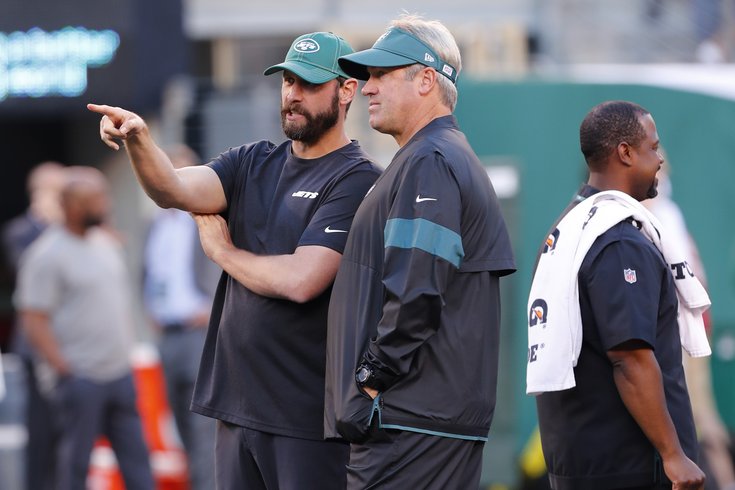 "Hey Doug, I killed a guy and buried him. Right over there."

For the gambling degenerates, here are my Week 5 NFL picks. To note, the team logos indicate who I think will win the game, not cover the spread. At the end of the picks, I'll note a few teams that I like based on the spread.

Rams at Seahawks (-1.5): The Seahawks have the superior quarterback, but they have not been super-impressive this season, despite their 3-1 start. Yes, the Rams had a major hiccup last Sunday when they allowed 55 points to the Buccaneers, but they have a very talented roster and I believe they'll turn it around in Seattle. As a bonus, sure, I'll take a point and a half.

Jets at Eagles (-13.5): When this line originally came out,  my first thought was, "The Eagles shouldn't be 14-point favorites over anybody." After all, they have faced at least a 10-point deficit in every single game they have played so far this season.

Then I took a close look at this Jets team, and Good Lord are they awful. As you know, Sam Darnold is unlikely to go in this matchup, which means that it'll be Luke Falk once again, playing behind what may very well be the worst offensive line in the NFL. The Jets have the 32nd-ranked offense, the 32nd-ranked passing offense, and the 28th-ranked rushing offense. They are an absolute mess across the board.

Five of the Eagles' top six cornerbacks are injured, and four of them won't play, but if there's a week where they can get by with a few guys signed off of the street, this is it. The Eagles should smash this team, and if they don't, it is cause for further concern.

Jaguars at Panthers (-3.5): Wait, so on a neutral field, with the Jaguars' pass rush against Kyle Allen (yes, I know he's been fine so far), Vegas thinks the Panthers are the better team. Yes, I'll take 3.5 points and the better team, please and thank you.

Falcons at Texans (-5): On Sunday, Deshaun Watson got asked a valid question in a respectful way, and Watson gave a great answer. Morons watched that and somehow concluded, "Oooooh, that guy got owned!"

No he didn't. He actually got an answer worth listening to, which are often few and far between. Anyway, I don't like either of these teams, but, Texans, I guess.

Buccaneers at Saints (-3.5): This line seems curiously low, even with Teddy Bridgewater not looking very good through his first two games. The Bucs have scored 86 points the last two weeks, but I guess I'm just waiting for Jameis Winston to have a four-INT game. I wouldn't touch this one, but I'll take the Saints at home.

Vikings (-5.5) at Giants: Again, like in the Saints-Bucs game above, I'm not exactly sure why the Vikings would be favored by 5.5 when they're a mess at the moment and the Giants (a) are home and (b) may already have the better quarterback. I will gladly take the Giants and 5.5 points. Vikings to eke out a win, Giants to cover.

Bears (-4.5) at Raiders: Derek Carr is always among the fastest quarterbacks to get the ball out, and that is no different this year. Those quick throws will help offset the Bears' pass rush, however, they don't have enough talent to consistently score on them. I like the Bears to win, but think Oakland can keep it close.

Ravens (-3.5) at Steelers: The Ravens care about the preseason and are willing to risk injury to be as prepared as possible for the regular season. As such, they tend to come out on fire to start the season, as they did once again here in 2019, while other teams look sluggish initially.

They get a little overrated and then fall off. I'm banking on that trend to continue.

Bills at Titans (-3): After Bill Belichick sent a scrub defensive back headhunting after Josh Allen last Sunday (kidding, maybe), Matt Barkley was forced to enter the game, and that went exactly as you would expect. I would consider taking the Bills here if I knew Allen would be out of the concussion protocol by game time, but I'll take the Titans with any possibility of Barks starting.

Broncos at Chargers (-6.5): The Broncos could emerge as sellers with some interesting assets should they continue to lose games.

Packers at Cowboys (-3.5): This is a matchup between two teams who weren't as good as their 3-0 starts would indicate, and finally lost Week 4. The Packers can't stop the run, and all the Cowboys really want to do is run it. You can over-think it and project the Packers to over-correct their run defense issues this week. I'll just take the team with the most overwhelming matchup advantage.

Colts at Chiefs (-10.5): Injuries are starting to pile up for Indy, which is why this line is 10.5. I love the Chiefs' ability to put points on the board in chunks, but I also love Frank Reich's ability to get his players to play for him. I'd just stay away.

Browns at 49ers (-3.5): The Niners are the NFC's last undefeated team, and the Browns are coming off their first game in which their offense really came to life. Interesting matchup. I don't buy the 49ers, at all, while I do think the Browns are a talented bunch.

There are three this week:

There was carnage last week, as a number of upsets knocked a lot of people out of survivor pools. Hopefully, you saved either the Patri*ts or Eagles for this week. I'll burn the Patri*ts here.