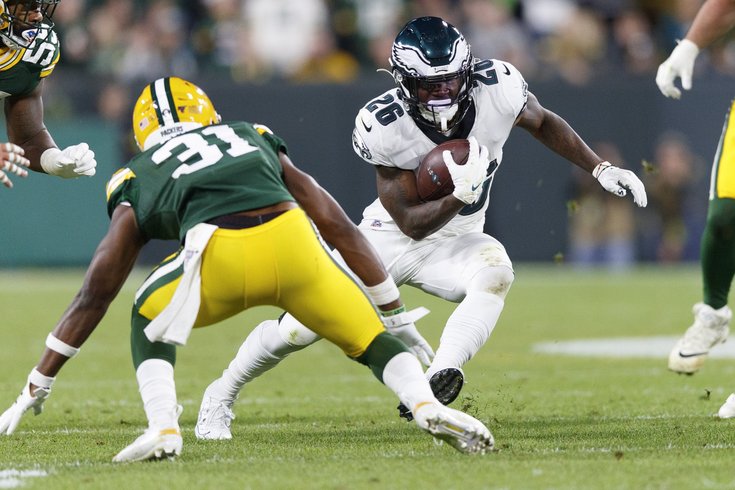 The Eagles ran the ball well Thursday night, so apparently, going forward, they should line up and run it all day like they're the late 80's Washington team.

Here's where people around the country have the Birds ranked after the fourth week of the 2019 regular season:

How to increase their playoff chances: Stabilize in the secondary. Hit hard by injuries at cornerback, the Eagles are yielding a league-high 324 passing yards per game. At this point, they need to seriously consider importing talent to fix the issue. Anybody know of any elite corners who would like to be traded?

#JimmySays: When do the Eagles start leaking that they're interested in Chris Harris or Patrick Peterson in an attempt to get Jalen Ramsey's price tag down?

The Eagles produced a tremendous team effort on Thursday night at Lambeau Field. Facing an undefeated Packers team, on the road, on a short week, with several key players still sidelined, coach Doug Pederson received huge efforts from both sides of the ball in a crucial 34-27 win. The defense stepped up with two goal-line stands in the fourth quarter, and the running game gave the offense much-needed balance on the way to 176 yards. Carson Wentz threw for just 160 yards, but he finished with three touchdowns and avoided the big mistake. Green Bay quarterback Aaron Rodgers couldn't say the same thing after his forced end-zone pass in the final minute led to the game-clinching interception by Nigel Bradham. Now 2-2, the Eagles get nine days to recover and prep before the winless Jets come to town. Order has been restored.

#JimmySays: They give up a lot of yards, but they've been good in the red zone.

Iggles jump 10 spots with impressive road win over the Packers, back to where lots of people had this teamed pegged in the first place.

That was a big-time road victory against the Packers. It might have saved their chances to win the division.

#JimmySays: That's not analysis either.

Last time they rushed for 176 yards was 2017 Super Bowl season, when Philly was 13-1 when hitting century mark on ground. Keep feeding Howard and Sanders, fellas.

#JimmySays: (Grumbles). Yes, the Eagles' run game was super effective against the Packers, and the Eagles should stick with it, especially with their offense having their effective 2-TE element working.

That said... Still? In 2019, we're still saying "(Team X) is (some great record) when they run for 100 or more yards?" I think that before anyone becomes a credentialed football writer, they must pass a course that makes them understand that rushing yards are more often a product of building a big lead than they are the notion of, "We're just gonna line up and run down their throats."

The Eagles were looking at a three-game deficit in the NFC East had they lost at Green Bay and the Cowboys beat the Saints, and both of those results were expected. Now the Eagles are only one game back after a clutch win at Lambeau Field and Dallas’ close loss. That’s not too bad.

#JimmySays: After a strong start, I can't believe how impotent the Cowboys' offense looked Sunday night.

The triumph Thursday night at Lambeau Field kept the Eagles’ season from unraveling any further, and Sunday’s Cowboys loss was an added bonus for Philadelphia. That quickly, the Eagles are right back in the NFC East race.

The Philadelphia Eagles entered Week 4 with their backs against the proverbial wall. The team sat at 1-2 after a disappointing home loss to the Detroit Lions and couldn't afford to fall further behind the Dallas Cowboys in the NFC East.

However, the Eagles are also experienced in big games—and they showed that at Lambeau Field.

Propelled by a rushing attack that gashed the Packers for 176 yards and over five yards a carry, the Eagles rallied after finding themselves in an early hole and pulled off a win that may be looked back on as a season-saver. With a home date against the reeling Jets up next, the Eagles have an excellent chance of getting above .500 and back on track.

"Philly's secondary remains a problem," [Bleacher Report analyst Gary] Davenport said, "but in Jordan Howard and Miles Sanders, the Eagles have a one-two punch at tailback they can use to control game tempo and time of possession. Dallas remains the best team in the division, but the gap between it and Philadelphia doesn't look as wide as it did a week ago."