Eagles TE Dallas Goedert was a beast against the Packers, with gifs and stuff 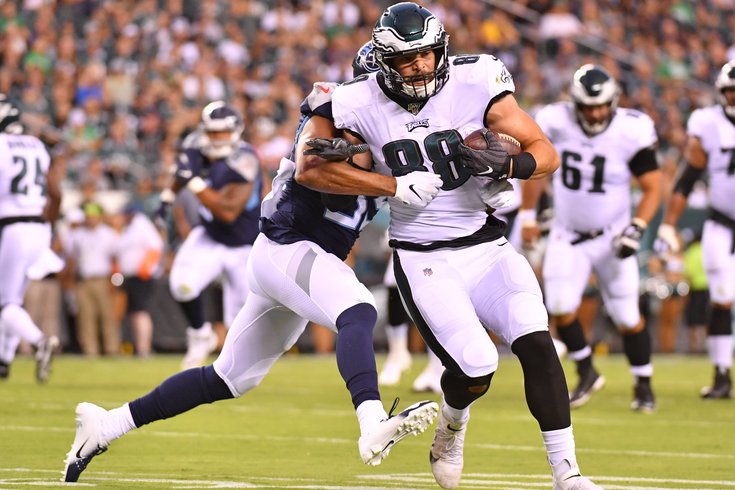 Dallas Goedert is good at football.

All throughout the offseason, a big deal was made about the Philadelphia Eagles' likely increased usage of two-TE sets, with the emergence of Dallas Goedert taking on a bigger role in the offense, playing in tandem with Pro Bowl tight end Zach Ertz.

We had to wait until Week 4 to see the benefit of those two-TE sets in full effect, but Goedert showed against the Green Bay Packers how they will be extraordinarily difficult for opposing defenses to deal with the rest of the season.

"They gotta be tough (for opposing defenses)," Goedert said. "If they go nickel, we can run the ball. If they go base or bigger personnel we can pass the ball to Zach. He’s an unbelievable route runner, and an unbelievable tight end. One of the best in the game, if not the best. I think I can do it all too. I think what I do in the pass game and in the run game, having me on the field is a help. Anytime we have 12 personnel, it can be a challenge for the defense."

• Goedert is on the left side of the line, next to Jason Peters. We'll use the zoomed-out sideline view here, because watch how far he drives edge defender Za'Darius Smith out of the play.

"We've talked about how strong Dallas is at the point of attack," Mike Groh said. "He did a great job again blocking both at the point of attack and carrying out his blocks down the field, really finishing. He's tenacious and strong. He has strong hands when he can get his hands on you. He plays with a balance and a base and he can really move people. He obviously gives us an advantage there as an in-line tight end."

• Preston Smith's (91) first move is to the inside, which is what the Eagles want here, and Goedert (right side of the line) makes sure he stays there.

• Here, lined up on the left side, you can see Goedert's athleticism, as he drives Will Redmond (25) way out of the play.

"Athletically, he's so good out in space that he can cover these guys up and he's got the length and once he gets his hands on them, he's able to move them out of there," Groh said.

When asked how rare it is for a tight end to be able to handle bigger defensive linemen on blocks, but also get to the second level and be able to track down faster defensive backs, tight ends coach Justin Peelle noted, "There are not a lot of guys in the league who can do that right now, and he takes pride in it."

• Here, again, left side, he blocks Blake Martinez (50) with some violence. Martinez can't get off the block without putting a hand up in Goedert's face, and the officials miss the illegal hands to the face call.

• Here he enters the frame in motion on the left side of the screen. He walls off DT Kingsley Keke, and Miles Sanders has a nice hole to run through. The Eagles implemented a number of wham and trap block concepts in this game. The idea is to allow a rusher to run free into the backfield, and the defender is then caught off guard by a blocker coming from an unexpected angle.

"Any type of trap play like that is designed to exploit the aggressive nature of the defense," said Jason Kelce. "If guys are coming downhill or shooting gaps, or if backers are scraping over top all over the place, they have to try to figure out which gap they're going to fit in, (those trap blocks) create one more thing the defender has to worry about."

And then, of course, once you run a few of those wham plays effectively, defensive linemen become more tentative shooting gaps and can be taken advantage of on power runs.

"If a 3-technique has to worry about whether he's going to get whammed by a tight end, all of a sudden the guard and tackle come off right into his face," Kelce said.

• Wham block. Goedert enters the frame in motion from the right side of the screen, wins his block vs. a much bigger player in DT Tyler Lancaster (95), and Sanders runs behind him, or rather, through him.

"As a tight end, you have to do so much in the passing game and run game, so we don't really get to work on our blocking, whether it's pass blocking or run blocking, as much," Goedert said. "So anytime you're doing that, you're under-sized and under-strengthed. All defensive ends do is work on that stuff, so that's what makes it tough, and challenging for a tight end, but it's a mindset, knowing what they're going to do and trying to get in the way as long as we can."

Tight ends coach Justin Peelle noted the importance of getting to the defender quickly to make the block.

Goedert not only gets to the defender quickly on these wham blocks, but as you see in several examples in this post, he has the strength to maintain those blocks.

"I love his angles," said offensive line coach Jeff Stoutland. "I love the angles this guy takes. I mean he's out there (on the end of the line), so a lot of times he doesn't hear the snap count. You're on the road, there's 80,000 people screaming, so being able to get off on the snap count and then run the proper angle to intercept maybe the DE on the back side, he does as good a job as I've ever seen as a tight end."

• Another wham block. Goedert enters the frame in motion from the right side of the screen, seeks out DE Dean Lowry (94), and BANG.

"I was pretty excited about the block. I look over to the sideline, and nobody is really celebrating besides Nate Sudfeld. He saw it, and was juiced up for me."

• Again, here's the athleticism, as Goedert cuts off a smallish, but lightning quick safety in Darnell Savage (26), and shoves him five yards down the field. Left side of the line, right side of the screen.

• Left side of the line, in between Peters and Ertz, Goedert owns Fackrell again, as he drives him 6-7 yards off the line of scrimmage. Fackrell eventually throws Goedert to the ground, but not before Jordan Howard has already run by for 16.

• Left side, again in between Peters and Ertz. Not much of an effort here from Adrian Amos (31), but Goedert vs. a safety in a goal line situation isn't fair.

Of course, having a tight end who can block but can't be a weapon in the passing game isn't really very beneficial. You could just put in an extra offensive lineman to block. What sets Goedert apart is that he's also a good receiver.

"It’s not just that he’s good at blocking," said Jason Kelce. "It’s also the personnel matchup that he creates in the passing game. In my opinion, if he were just a blocker – I mean, he’s a good blocker, and I don’t want to take anything away from him there – but what really creates the mismatch is that he and Ertz are also dominant receivers.

"Not too many teams have the ability to defend both (the run and the pass) with those guys on the field, in my opinion."

Goedert as a receiver

"If I had a choice I’d run routes every play, but that’s just not realistic," Goedert said. "You have one of the best in the business right there (in Ertz), and you got receivers who get paid to do that too, so obviously I’m going to be limited with the balls I get. I want to be on the field, so if I can block well that gonna help me be on the field."

Against the Packers, Goedert only had two catches on three targets, but they were both big plays.

• A screen pass in the red zone got the Eagles inside the 5, and it was set up by the Packers being lulled to sleep by Goedert pass protecting on previous plays.

"I had been pass blocking a lot, so I was able to sell that," Goedert said. "Zach was right next to me on my hip, and he was able to run off and take a couple defenders. I could have done better to help the O-linemen set up my blocks, and might have gotten in the end zone, but it’s a fun play, and hopefully we get to run it more."

Peelle noted that Goedert is handful to deal with after the catch, as we saw on several occasions in 2018.

"Putting the ball in Dallas’ hands, he’s got a natural ability like that," he said. "He’s big and strong, and he’s got some subtle quickness to him."

"I lined up out there, and nobody was in front of me, so I’m yelling, ‘Carse, snap the ball!’ Throw it to me, let’s get the easy one. And then he said when he saw the guy running out to cover me, he thought he’d overplay and I’d be able to beat him inside and that’s exactly what happened."

As you can see, while Goedert has a major size advantage over the safety (Redmond, No. 25), he smokes him with quickness.

And finally, as an added bonus, Goedert also had a key block on the big Sanders kick return that jump-started the Eagles' offense. (We'll cursor over Goedert in the gif below.)

"The one thing I would say about Dallas Goedert is that the guy is a football player," said special teams coordinator Dave Fipp. "I mean, if you give him a job, most of the time he gets it done. At the end of the day, as a coach, that's what you're looking for. You need guys who can get things done. It doesn't matter if it's easy or if it's hard. If you give them a job description, he gets the job done. I would say that like, that's the best way I can say it. He's a football player. Gets it done."

There isn't anything Goedert doesn't do well. He can block (as over-documented above), he's strong, he's quick, he can get yards after the catch, and he has good hands. Of course, on that last point, Goedert had a horrible drop against the Lions Week 3, however, in 2018, he had a drop rate of 2.9 percent on the season, which is excellent. In my view, there's little concern about his ability to catch the football.

While he may not put up huge numbers in the stat sheet, Goedert is going to be a major factor in the offense this season.