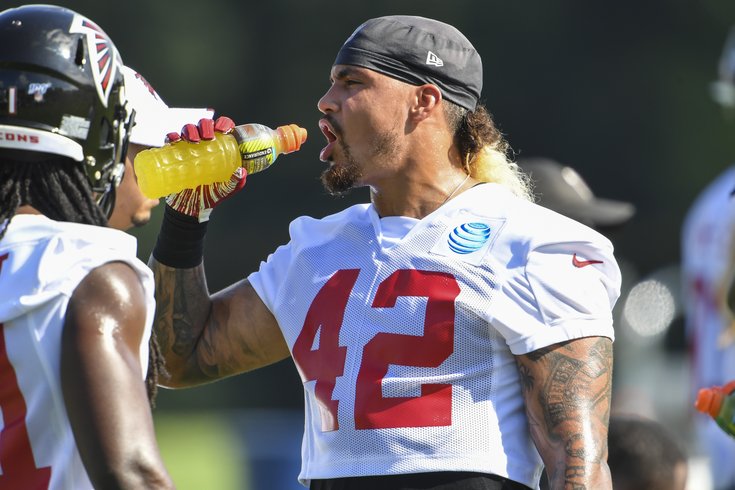 Duke Riley is an aficionado of tattoos and yellow sports drinks.

The Philadelphia Eagles announced Monday evening that they traded safety Johnathan Cyprien to the Atlanta Falcons for Duke Riley. There was also a draft pick swap involved. The trade details:

To note, the Eagles don't have their own seventh-round pick, but they do have the Buccaneers' seventh-rounder, so it must be that pick that they are sending to Atlanta. (Update: I have confirmed it is indeed the pick acquired from the Bucs that is being sent to Atlanta.)

Cyprien only played 15 snaps in the Eagles' regular defense this season, though he was a regular on special teams. Over the course of his illustrious Eagles career, Cyprien recorded one tackle.

Riley, meanwhile, was originally selected in the third round of the 2017 NFL Draft by the Falcons. He has appeared in 32 games, with 16 starts, but has had a disappointing career so far in Atlanta. He is an undersized linebacker, but he does have some decent athleticism:

The acquisition makes sense from the Falcons' perspective, as they lost Keanu Neal for the season with a ruptured Achilles Week 3. Cyprien gives them an experienced safety to fill Neal's vacated role.

From the Eagles' perspective, they trade a player they added off the street in August, and move up from the seventh round to (likely) the top of the sixth round of the 2020 NFL Draft, and replace Cyprien's special teams role with Riley.

You can see the Eagles' full slate of 2020 draft picks here.