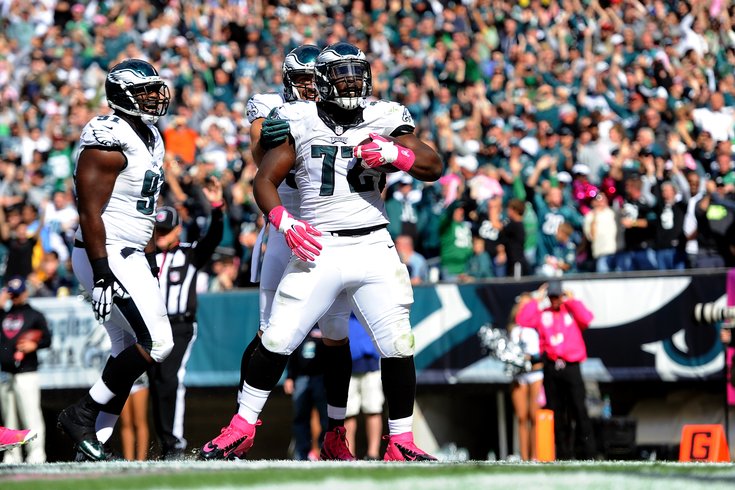 With Cedric Thornton and Taylor Hart out, the Eagles will be thin along their defensive line this afternoon.

The Eagles' released their inactives against the Jets. Among them are starters Mychal Kendricks, Kiko Alonso, and Cedric Thornton. The Birds will need DeMeco Ryans, Jordan Hicks and Brandon Bair to step up in their place. Here are the Eagles' and Jets' inactives:

• DeMarco Murray: Murray's struggles have been well-publicized, but the reality is that he has had absolutely nowhere to run when he has touched the football this season. The Eagles have good depth at running back, however, it would have been ideal for the Eagles if he would have been able to play today in the hopes that he could get going.

• ILB Kiko Alonso: Alonso is out with a knee injury. He is the Eagles' best cover linebacker. If there's one team the Eagles can afford to be without Alonso against, it's the Jets, who don't have great receiving threats at TE and RB. Alonso's long-term prognosis remains a mystery.

• ILB Mychal Kendricks: Kendricks is out with a hamstring injury. I guess this is why the Eagles over-did it with linebacker depth this offseason. With Kendricks and Alonso out, DeMeco Ryans and rookie Jordan Hicks will be forced to start and rarely come off the field. Hicks was impressive in his first extended action as a pro last week. Ryans made plays on a goal line stand, but struggled in coverage.

• DE Cedric Thornton: Thornton is out with a broken bone in his hand. He is a quality starter and very good run stuffer.

• WR Josh Huff: Huff was a surprise addition to the injury report yesterday, and he will not play today. While the Eagles have depth at WR, Huff's ability to make plays after he has the ball in his hands is something the Eagles should have tried to utilize more in the short passing game against the Cowboys with the Sam Bradford struggling to get the ball down the field accurately.

• DE Taylor Hart: Hart is out with a shoulder injury. He has been active in favor of Brandon Bair so far this season. With Cedric Thornton out, Hart would have been the logical player to start in his place. With Hart out, Bair will be forced to play a big role on Sunday.

• WR Chris Owusu: Owusu is out with a knee injury. He has 4 catches for 55 yards this season as the Jets' third WR. With both he and Eric Decker out, the Jets will be deep into their bench at WR.

• LB Trevor Reilly: Reilly is out with a finger injury. He had a sack and a forced fumble against the Browns Week 1.

• CB Darrin Walls: Walls is out with a hamstring injury. He started 12 games last year for the Jets, but on this year's roster he serves as depth at CB.