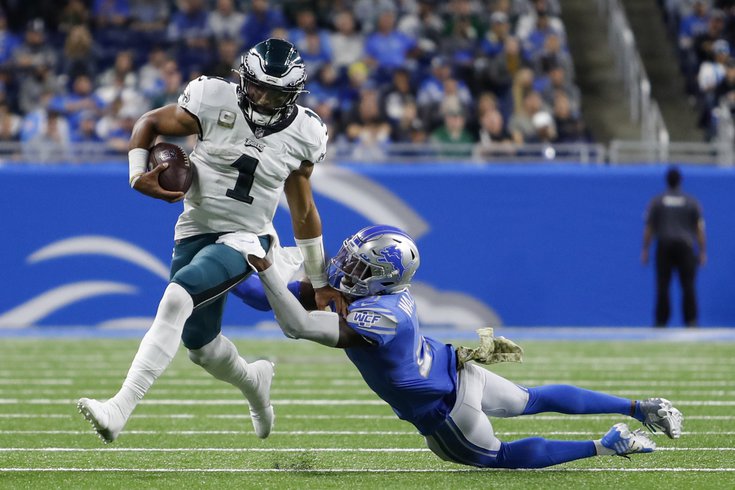 The Eagles might be wise to come out running Week 1 against the Lions.

In Week 1 of the 2022 regular season, the Philadelphia Eagles will travel to Detroit to take on a young, scrappy Lions team that was featured on HBO's 'Hard Knocks' this summer.

1) The Eagles' rushing attack vs. the Lions' rush defense

Remember last season, when the Eagles ran it all over the Lions' defense, to the tune of 236 yards in a 44-6 shellacking? It was almost like when the Eagles were trying to run out the clock at the end of the game without running up the score, they would have done the Lions a favor if they had passed it instead. As you're aware, the Eagles finished the 2021 season as the No. 1 rushing offense in the NFL, while the Lions finished as the fifth-worst rush defense.

"We got on a roll there in that game by the way we ran the ball, so it was good," Shane Steichen said on Tuesday. "But every year is a new year. It's going to look different."

With the addition of A.J. Brown and an improved Jalen Hurts, the Eagles are likely to throw the ball a lot more in 2022 than they did in 2021. However, in a matchup against a team they physically dominated in the trenches on both sides of the ball last year, the Birds might be wise to lean on the tried and true run game early in the season while they get their sea legs, so to speak, especially when their focus this offseason was on remaining healthy, while the Lions' was on getting as ready as possible for Week 1.

In his final season at Michigan, Hutchinson had 14 sacks and a pair of forced fumbles. At the Combine, he measured in at 6'7, 260, and he ran a 6.73 3-cone, which is absolutely absurd for a player his size, and would actually be in the 90th percentile among running backs. He can rush with power, quickness, and motor, which is why he got picked second overall by the Lions in the 2022 NFL Draft. A college highlight reel:

A season ago, as you already know if you read enough Eagles coverage throughout the offseason, the Eagles finished with just 29 sacks in 2021, which was second-worst total in the NFL. Well, the Lions weren't much better. They only had 30.

Hutchinson is the Lions' most dangerous defender, even though he has never played an NFL snap. During the preseason, the Lions rushed him off of both sides of the line, as well as along the interior, which means that everyone along the line must be aware of what he can do. The Eagles cannot allow the rookie to create any turnovers, and Jeff Stoutland will be tasked with coming up with a plan for a player with no NFL regular season tape.

"Without giving out any secrets, he's a heck of a football player," Steichen said. "I really just talked about him as a football player, watching him in college, I mean he's explosive, he's long, he's powerful. You saw in the preseason him coming off the edge, just the explosiveness he plays with. So, we have to be ready for him."

I don't think there's a lot to take away from 'Hard Knocks' in terms of competitive advantage, but one thing that was revealed is that the Lions' linebackers stink. How do I know that? Well, the following clip is of linebackers coach Kelvin Sheppard praising rookie sixth-round linebacker Malcolm Rodriguez for beating expectations. But really, it's probably more of an indictment on the Lions' other linebackers that Rodriguez was (at least at the time) their best performing linebacker in camp, threatening to take the starters' jobs.

Whether it's Alex Anzalone or Derrick Barnes or Chris Board or Rodriguez, none of those guys should be able to cover Goedert.

The best aspect of this Lions roster is their offensive line, which would normally look like this, if everyone were healthy:

However, Big V was unexpectedly placed on injured reserve on Monday, and it is expected that Tommy Kraemer, a second-year undrafted player out of Notre Dame, will start in his place.

The Eagles have dumped a ton of resources into the interior of their D-line, and that unit is thought of as one of the deepest and most talented in the NFL. Sunday will be their first opportunity to prove it.

The Lions' best receiver is St. Brown, who primarily operates out of the slot. He caught 90 passes on 119 targets in 2021, meaning that Lions quarterbacks completed 75.6 percent of their passes when they went St. Brown's way. He is a sure-handed receiver and a good route runner who led the Lions with 48 first downs in 2021. The next-closest Lions player in receiving first downs was TE T.J. Hockenson, with 32.

Maddox and perhaps the newly acquired Gardner-Johnson will be tasked with covering St. Brown in high-leverage third down situations.

Remember the game the Eagles lost to the Lions in 2019 when J.J. Arcega-Whiteside dropped what should have been a game-winning touchdown? Well, do you remember that earlier in that game, the Lions had a 100-yard kick return for a score?

It's that kind of huge special teams play that can swing a game in favor of a less talented team. One concern I would have if I were the Eagles would be the inconsistent Arryn Siposs punting away to Lions punt returner Kalif Raymond, a dangerous water bug-like playmaker who averaged 11.2 yards per punt return in 2021, which was fourth in the NFL among players with at least 20 punt returns. My worry would be Siposs hitting a low liner fielded by Raymond with room to operate.

And then also, who is the Eagles' punt returner? My guess is that it will be Britain Covey, who could be either a temporary or permanent call-up from the practice squad this week. Throughout training camp, I can't recall seeing Covey muff any punts, but he would be an undrafted rookie playing in his first ever professional game... 😬