Eagles mailbag: Should the hype around the Eagles make fans nervous? 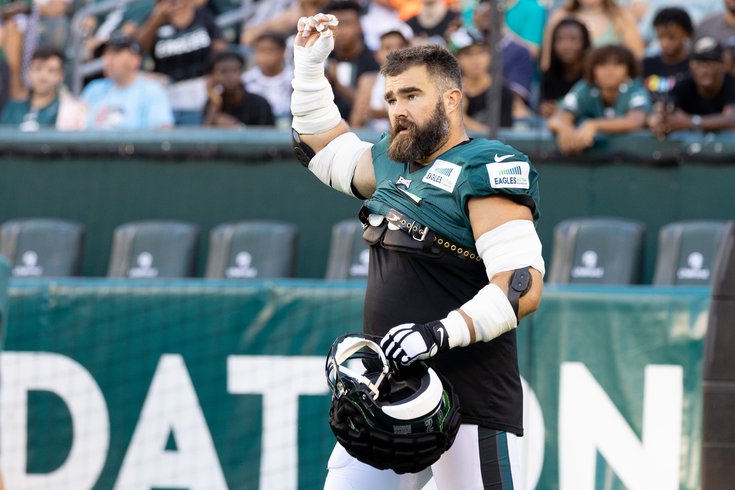 Jason Kelce #62 of the Philadelphia Eagles enters the field during an open practice at Lincoln Financial Field in Philadelphia, Pa. on Aug. 7, 2022.

Mail time! Football inches closer with the Thursday night opener and the Eagles heading to Detroit for their first game of the 2022 season on Sunday. There's no better time to answer some Eagles fans' questions. If you want to ask a question in a future mailbag, you can email me (shamus@phillyvoice.com) or tweet at me.

Let's get to the questions...

@ericjawn: As we get closer to the season the hype around the Eagles nationally begins to grow. Does this worry you at all? Do you get nervous with “Dream Team” vibes or does this team just feel different to you?

“I think we have a lot of talent”

-Jason Kelce’s message to the team that you do not win on paper pic.twitter.com/b74ZocVPe4

Is there truth to do that?

Let me look at every Eagles season since Kelce joined the team in 2011. The "High Expectations?" column is based on how I recall the discourse around the team being.

I gave 2018 and 2019 shrugs because the Eagles were supposed to be legitimate Super Bowl contenders and were just okay, limping their way to the playoffs in a bad conference and/or division.

With my unscientific methodology, I can't recall the Eagles being a hyped team in the offseason and then an actual good team in the regular season in the last 10-plus years. Much like the talk about how an NFC East team hasn't repeated division winners since 2004, this tidbit is fun to discuss, but ultimately not predictive.

People can't foresee injuries or a COVID season that throws a wrench into everything. Nnamdi Asomugha and Jason Babin messing up the vibes in 2011 has no bearing on whether Jalen Hurts will take a step forward as quarterback in 2022.

Any Eagles fan that's weary of national media members picking the Birds to be the No. 1 seed in the NFC or a Super Bowl team is in their right to be skeptical. Saying "2022 is different than 2015" four days before Week 1 starts doesn't do much to quell fans' concerns, but being around the team as a media member this offseason, there is an energy in the building that goes beyond a talent. Credit to Nick Sirianni to cultivating a great culture.

One of the greatest aspects of fandom is letting your imagine run wild in the lead-up to the regular season. There's nothing wrong with dreaming of another Super Bowl parade. Don't worry about what the media is saying (outside of what's being written on PhillyVoice of course!).

@EaglesLiker: Is it a good omen that Gardner-Johnson is from the saints and has the same birthday as Malcolm Jenkins?

Comparing C.J. Gardner-Johnson to Malcolm Jenkins has been a familiar refrain for Eagles fans since the Birds acquired the defensive back last week. It was a different league when Jenkins came into the NFL in 2009, but I wanted to compare their stats over the first three years of their career, all of which came in New Orleans.

I didn't know about the birthday part (both born on December 20, 10 years apart). I love Eagles fans looking into that aspect of the move. Gardner-Johnson is bringing a "dawg" mentality to Philly, so, sure, take it a positive.

@SwanlynnTaze: What Bruce Springsteen song does this Eagles team remind you most of?

Is the greatest question anyone could ask a Philadelphia sportswriter?

Howie Roseman has rebuilt this Eagles roster over the last two years and given them an influx of young talent all over the field on both sides of the ball. These players are on the upward trajectory of their careers, but the time is now with the aforementioned expectations for this team in 2022. It's time elevate their games and take a leap from 2021.

I hid in the clouded wrath of the crowd

But when they said, "Sit down," I stood up

@Makyle_Ice: If you had full control, what would you make the eagles uniforms look like? To have a guideline let’s say 4 full sets if you want (that’s what the chargers have since they got two alternates) and two helmets if you want.

I'm a big proponent of midnight green and I know that's not the consensus opinion. It's unique. It's not stuck in the past. The Eagles' most successful period in team history coincides with the switch to midnight green. They won the Super Bowl in it!

People love Kelly green. I get it. I do. It's great! The fanfare around it gets out of control because people want what they can't have. If the Eagles went back to full-time Kelly green uniforms, people would be complaining in 10 years that they abandoned midnight green and need to bring it back.

The best of both worlds solution is what the Eagles are going towards: regular uniforms in midnight green with Kelly green alternates. That's how it should be done.

My choices for how I would do a four-uniform set:

• Alternate 1: White helmet with Kelly green wing, Kelly green jersey, silver pants. The old-school white helmet is better than the green one. The Eagles' silver pants are so classic and it would be a grave mistake to not use those when the Kelly green uniforms are unveiled in 2023. This should be the default uniform for home prime time games.

• Alternate 2: White helmet with Kelly green wing, white jersey, silver pants. These would be so clean. Perhaps it would be good to use this for the non-Dallas (since Cowboys always wear white at home) divisional road games?

That should please everyone, but it won't. 🤷

@MarkHenryJr_: Why should I not responsibly hammer the Bucs on SNF?

The Buccaneers are currently 2.5-point road favorites (via DraftKings Sportsbook) against the Cowboys on Sunday Night Football. I'd be all over that line. This isn't a "Philly writer bashing Dallas" situation. It's all about Tom Brady, regardless of who the Bucs are playing.

Tom Brady is the football GOAT. It's pretty easy. I'm not his biggest fan. I loved Peyton Manning as a kid. It's just a fact. What separates the GOATs throughout different sports is their psychological devotion to greatest that gets taken to levels unforeseen. They can use everything and anything for motivation. I think back to Michael Jordan just making things up about opponents to keep giving himself an edge. Whatever is necessary to get into that mode, the GOATs are going to get there.

Every week can be a TB12 Revenge Tour if Brady thinks it is.

@Rich_Bobbe: What’s the game on the schedule you have circled as being a good barometer of knowing exactly what this team is about? Think like that Panthers game in 2017.

I love the comp to that Thursday Night Football game in Carolina in 2017. That was the game for me where I felt the Birds had a true shot at a Super Bowl run. Many people in my life echoed that sentiment at the time.

The choice for me is Week 6's home Sunday Night Football matchup with the Cowboys. Dallas has had the Eagles' number for a while and these prime time games never seem to go the Birds' way against the Cowboys. If people are hoping for a deep playoff run, it's going to have to start with winning the division and beating the reigning NFC East champs.

A Birds win against Dallas could have the Eagles 5-1 (or better?) heading into the bye week. The city would be ready to explode.