Thanks to what he calls a 'Ninja Warrior' workout 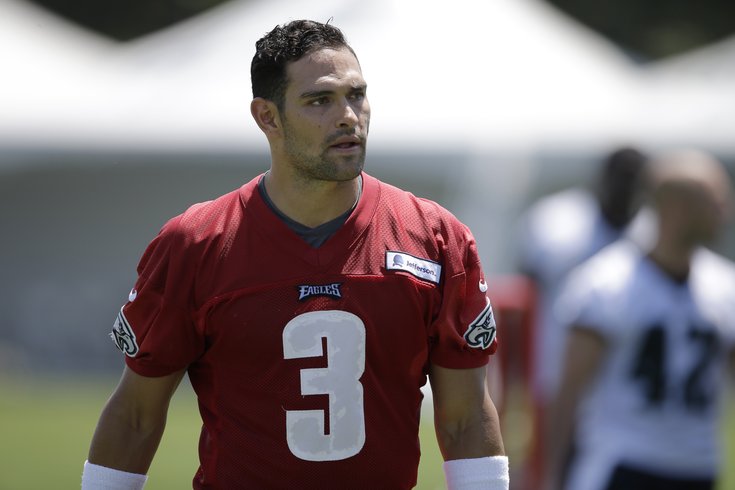 Mark Sanchez is ready for you, Ronda Rousey. Sort of.

On Thursday, the Eagles quarterbacks were out on the field learning, well, how to fall properly. And while it's likely a way to help prevent injuries if [read: when] they get hit in live action. Part of that drill involved being pushed down on a mat by one of the coaches.

Another, much more more entertaining part, saw the QBs doing summersaults on the field. To say it was an odd sight would be an understatement.

Something new...#Eagles QBs learning how to fall. And tumbling. Sanchez said it was "ninja warrior training" @6abc pic.twitter.com/gRz9VpdQwV

After practice, Mark Sanchez was asked about how he felt physically so far at camp, and he offered up one hell of an answer.

"I'm going into my seventh year, which is crazy," Sanchez said. "I'm getting emails and calls about my 10-year high school reunion. ... I feel like I'm in great shape. You just saw our 'Ninja Warrior' workout over there. It was pretty intense.

"Just in case we're walking down Broad Street and Ronda Rousey tries to knock us out."

Amid the laughs from the media, one intrepid reporter asked, "You'll stop her?"

"No, no, no," Sanchez quipped. "I didn't say that. I just know how to fall when she throws me around."

And guess what, Ronda, he's been putting in extra work.

Perhaps the drill will benefit Sam Bradford and Tim Tebow slightly more, as neither has taken a regular season hit in quite some time. But will it help?

"I hope so, or else we just look pretty foolish over there doing it," Bradford said with a laugh. "No, it was fun doing that.  I think talking to coach and some of our strength coaches, it's been a while since I've gotten hit, since Tim's gotten hit. So just learning how to go to the ground is part of it."

As for Tebow, who is battling Matt Barkley for the third QB spot, he liked it so much that he was back at it on Friday following practice.

"That's different," Tebow said of the falling drill. "And then I was trying to do a little real hitting over there to get used to it. It's fun. It's a fun part of the game. I enjoy it."

[h/t to @GonzoCSN for asking the follow-up that prompted Sanchez's Rousey answer.]