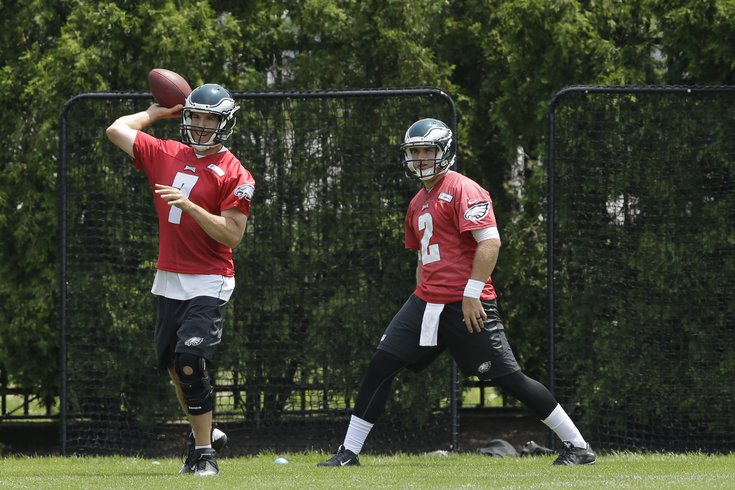 Today the action at practice was on the field farthest away from the steps, where the media can typically get a bird's eye view of practice. And so, we were at field level trying to peer through a man-made wall of Eagles players. As a result, my observations are a little more spotty today, but here's what I was able to see:

• We've already noted this, but Sam Bradford has a gun. Remember when Donovan McNabb would fire passes as hard as he could at receivers standing 5-10 yards away from him? We're not talking about his worm-burners. We're talking about his close-range missiles that would bounce off receivers' hands. Well, Bradford did that today to Miles Austin, who couldn't handle Bradford's heat. Bradford also had a nice sideline throw with zip to Riley Cooper. Bradford still isn't participating in 11-on-11 drills, but Chip Kelly seemed sure that he would when training camp begins.

• If football were all seam throws, Mark Sanchez would be a Pro Bowl quarterback. He does a great job hitting receivers down the middle of the field. Today he hit Austin in between two defenders with a perfectly placed ball.

• About mid-way through practice, it dawned on me that I hadn't seen Josh Huff catch any passes in any of the media-attended practices. That doesn't mean he hasn't. It just means I haven't seen it. I asked a few other media guys if they'd seen him do anything, and they agreed that he has been quiet. And then sure enough, like clockwork, he caught a pass on a sideline comeback route, and then made a falling catch deeper down the field on a back shoulder throw.

Huff has been a player I've gotten a lot of questions about so far either on Twitter or my weekly chats here. He was battling a banged up hip early in OTAs, so I'm sure that hurt his effectiveness some. Huff is a player who does a great job breaking tackles and running after the catch, so non-contact practices don't play to his strengths. Still, you'd obviously want to see him make more plays during the non-contact team drills than he has. You don't want to make too much of how many catches a guy makes in a practice in June, but Huff will be an obvious player to watch in training camp.

• I watched the punt team gunners closely today. Brandon Boykin is still awesome at it, and I was impressed by Eric Rowe as well. Rowe did a nice job locating the punt in the air, beating it to the goal line, and downing it inside the 10.

• The kick returners were sloppy today. Nelson Agholor fumbled in a non-contact drill when a defender (couldn't see who) was able to punch the ball out. Jordan Matthews also muffed a kickoff, and Kenjon Barner allowed one to hit the ground before he picked it up and took off running.

• One player who seems to be taking on something of a leadership role could be Cedric Thornton. During DL drills, Thornton was a non-stop chatterbox giving the young defensive linemen encouragement as they hit the sleds.

• I've mentioned him before, and I'll mention him again. WR Seyi Ajirotutu continues to impress me. Today, he was running a slant route, and as he was catching the football, he cut hard back to the outside and got a bunch of yards after the catch. Really good looking athletic play.