On Tuesday, we published our final Philadelphia Eagles-only mock draft of the offseason. With the draft beginning tonight, we'll take a peek around at some of the national guys and see who they have going to the Birds at 32nd overall.

He's a north-south slasher and a tough guy. He finishes runs. He's had some off-field issues. The reason I love this pick? Eagles running backs coach Duce Staley will get him going in the right direction.

#JimmySays: Guice is clearly the second-best running back in this draft after Penn State's Saquon Barkley, and should go earlier than this. Will he make it to the Eagles' pick at 32, or even out of the first round completely, because of personality concerns? We'll see.

The Eagles have the luxury of taking the best available player at this spot. Michel would be a dynamic playmaker in this offensive system.

#JimmySays: I'm a fan of Michel's game as well. In this scenario, he'd be compared to Derrius Guice for the entirety of his career.

Yes, they signed Mike Wallace this off-season to take the top off the defense, but in an offense that features a lot of quick throws, big-bodied receivers win a lot of the battles to make those catches when they work inside in traffic. Sutton is that type of receiver.

#JimmySays: I think WR is perhaps an underrated position of interest to the Eagles in this draft, but I think there will be better players available here.

Maybe my favorite defensive back prospect in this draft, Oliver is a 6-foot-tall big body with an insane 80-inch wingspan. Philadelphia already cut Daryl Worley this off-season. Oliver is a guy who can contribute right away.

#JimmySays: This really only makes sense to me if the Eagles have a trade in place for Ronald Darby.

Is it a mistake to not put Georgia RB Sony Michel here? Probably, but with Price's ability to play guard and center, Philly gets some valuable depth along the offensive line.

#JimmySays: The Eagles could trade back and get him.

With Brent Celek no longer on the roster, the Eagles could use another TE to complement Zach Ertz. Goedert can serve as Celek's replacement and be another huge weapon in the middle of the field for Carson Wentz.

#JimmySays: I was originally against the idea of taking a tight end in the first round, but have come around on that more recently, mainly because of the importance of converting in the red zone.

The release of Daryl Worley leaves a corner position open, and Hughes fits the slot role quite nicely.

#JimmySays: Teams will have to feel comfortable about Hughes' off-field baggage to take him in the first round, but he would fill three immediate needs (slot CB, KR, and PR) for the Eagles.

The Super Bowl champs can afford to go best player available here. I'll figure out how to divvy up carries later.

#JimmySays: To note, this was a mock draft in which Kiper and McShay went back and forth and took turns making picks. McShay drafted Michel for the Eagles.

#JimmySays: Williams was my pick in my final full first round mock, so obviously this is a very smart pick. ;)

I wouldn't be shocked if the Eagles trade down from No. 32 (maybe with Buffalo?), but after the team quickly moved on from Daryl Worley and his off-field issues, cornerback could be a great position to target with the talent expected to be available in the late-first, early-second range. Oliver gives the team long-term insurance in case Ronald Darby isn't re-signed, and he has the upside to be one of the league's top corners.

Without the tradedown, the Eagles sit and wait until the end of the fourth round to pick up Hall, an incredible FCS defensive lineman who could develop into a much cheaper starting option than Timmy Jernigan down the line. Samuels is an intriguing chess piece for Doug Pederson to move around the formation.

McFadden adds more depth at corner, and he might benefit from some development on the practice squad. Watson is another practice-squad player who could develop into something more with the right coaching. Jackson is a wild card who can compete for the No. 3 role at running back.

#JimmySays: This was actually a seven round mock draft. Here were the other picks: 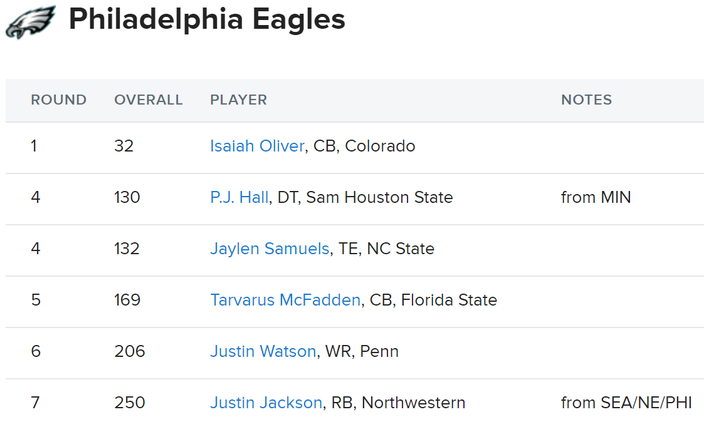 The defending champs land a strong corner to replace the departed Patrick Robinson.

With LeGarrette Blount now in Detroit, Guice, who has drawn comparisons to Marshawn Lynch, would seem like a natural fit. Yes, Jay Ajayi and Super Bowl hero Corey Clement return (along with Wendell Smallwood) but as Blount proved in 2017, you can never have too many talented backs in a game where injuries can derail a season.

He is a fast corner who could help alleviate the loss of slot player Patrick Robinson in free agency. The Eagles brought him in for a visit.

#JimmySays: Good job by Pete actually writing about the Eagles' pick this time.

But I think the Eagles are much more likely to deal this pick; I just don’t know to whom. They’re seeking a trade—that I can tell you. Philadelphia has no pick in rounds two or three, and the Eagles don’t pick until the end of round four. So as of now, they go from 33 to 129 without a pick. That’s why they’ll be trying to deal all night Thursday. If they stick … The Eagles have a 35-year-old left tackle, Jason Peters, coming off major injury, and starting guards (Stefan Wisniewski and Brandon Brooks) who will be 29 this season. Connor’s the perfect pick for them, in the unlikely event they stick.

#JimmySays: Rare occasion where I agree with everything Peter says here.

Slot corner and returner is the top need.

The Eagles got the most out of their running back committee in 2017, but it may be hard to pass up a yards creator like Guice if he’s sitting there at no. 32. Guice has drawn comparisons to Marshawn Lynch because of his tackle-breaking prowess, but he’s versatile enough to be a factor in the passing attack, too. Adding Guice to a backfield group that already features Jay Ajayi and Corey Clement just doesn’t seem fair.

The defending Super Bowl champs add a dynamic running back who could thrive as a situational player.

#JimmySays: A lot of people on Michel, apparently.

#JimmySays: Boom or bust player who probably won't be there when the Eagles are picking, though he does make some sense.

Like the Jaguars, the Philadelphia Eagles have the freedom to make a luxury pick in Round 1. If I'm Philadelphia, I'm adding another explosive playmaker at receiver.

LSU's Chark is one of the most underrated wideouts in the draft. If he had a better quarterback in college, this wouldn't be the case. Between missed throws and underthrown balls, Chark saw numerous wasted opportunities that would be touchdowns with an NFL quarterback under center. Too many people are sleeping on him.

Chark reminds me of A.J. Green when he came out of Georgia in 2011. Adding him to Carson Wentz on this Eagles offense makes too much sense.

#JimmySays: He's 6'3, not 6'0, and I can see where the Eagles could find his speed appealing, but they are holes in Chark's game. The comparison to A.J. Green is a little much.

Title teams can afford to take a center in the first round.

#JimmySays: I guess, buuuuut would that make sense when the Eagles' current center is a First Team All-Pro? I feel like Bob just stuck Daniels in there for Huddle Report points, because he thinks Daniels could go first round, and didn't have him in there yet. I mean, that's what I did with my Falcons pick last year, ha.

• 7 players were named once each.