What they're saying: Jalen Hurts is Eagles' Michael Jordan 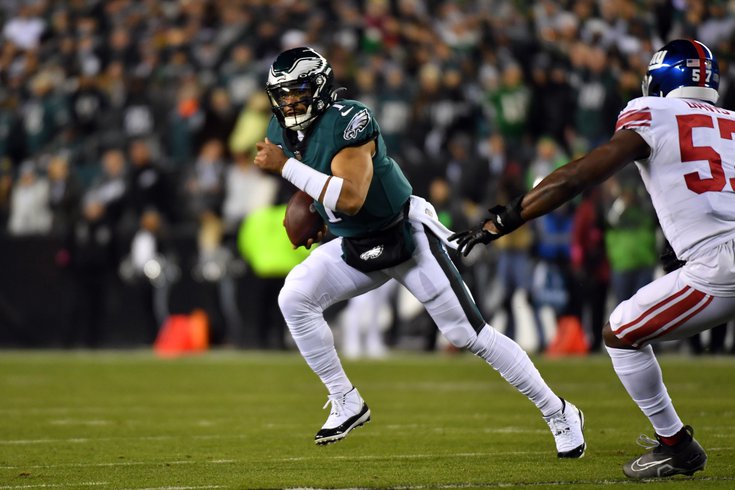 Eagles QB Jalen Hurts tucks the ball and runs during the first quarter of Saturday night's divisional round playoff game against the Giants at Lincoln Financial Field.

Saturday night was almost too perfect.

Five years, to the day, of that fateful NFC Championship game, where the 2017 Eagles came out and pummeled the Vikings in an unforgettable run to the Super Bowl, and the 2022 Eagles went out and did the same to an upstart Giants team in near-identical fashion in the divisional playoff round: A 38-7 beatdown in front of a raucous Lincoln Financial Field crowd just looking for a party.

Jalen Hurts is back to playing like his MVP self.

DeVonta Smith is catching any and everything.

And James Bradberry? The Giants aren't getting a do-over on that one.

The Eagles are coming off a dominant performance and are on the doorstep of the Super Bowl, and the path to get there will continue through South Philadelphia, where the fans won't make anything easy on the 49ers who will be trying to get in the way.

The vibes are immaculate.

Here's what they're saying about the Eagles...

When Jalen Hurts returned from a shoulder sprain in Week 18 to help the Eagles capture the No. 1 seed, he walked into the stadium wearing a Michael Jordan shirt bearing the words of that famous press release: "I'm back."

And after the Eagles thrashed the Giants on Saturday night, Nick Sirianni wasn't hesitant to do it, but ultimately drew comparisons between Hurts and Jordan.

Now, is Hurts the football equivalent of Jordan? No, he was a once-in-a-generation athlete not just for basketball, but for sports as a whole, but just think about the past few weeks and Hurts' mentality for a second, like Mike Sielski did over at The Inquirer:

He seems to relish the idea that he is withstanding a significant measure of pain, as if it enhances his standing in his teammates’ eyes, his coaches’ eyes, and in his own. Sirianni hesitated before dropping that Jordan comparison, and there’s no doubt that Hurts isn’t completely healthy. But Jordan was a master at motivating himself by building obstacles to be overcome and turning an opponent’s innocuous quotes into egregious slights, and Hurts seems wired in the same manner — and has been since his arrival here. After missing two games, he donned a Jordan-themed “I’M BACK” T-shirt for the Eagles’ regular-season finale. And remember: Carson Wentz didn’t just lose the team’s starting quarterback job. Hurts made it clear to the entire organization, once he entered the lineup late in the 2020 season, that he wasn’t about to give it back.

“The first day he stepped in at Green Bay, I felt like he was dialed in,” tight end Dallas Goedert said. “I don’t know what everybody else was looking at, but he’s been a dog since he got here — I can tell you that.”

A dog. A breed of one. A cut above every other quarterback in the NFL. That’s Jalen Hurts in his own mind. That’s more and more a reality difficult to deny. If he and the Eagles win twice more, who could argue with him? [The Inquirer]

What are the playoffs without unsung heroes?

The Eagles have tons of them – maybe the greatest of all of them too – and running back Kenny Gainwell became the latest name to etch a spot into Philadelphia sports lore.

With 12 carries and 112 yards in Saturday night's playoff win, Gainwell became the sixth Eagle to rush for 100 yards or more in the postseason, joining the ranks of Steve Van Buren, Wilbert Montgomery, Brian Westbrook, and quarterback Donovan McNabb.

He's the third-down back.

Gainwell was supposed to take the next step in the Eagles offense heading into Year Two, but struggled with inconsistency throughout training camp and fell behind Boston Scott on the depth chart. Stuck as the No. 3 running back most of the season, Gainwell saw his carries diminish and his numbers decline (409 combined yards, four touchdowns).

The diminished role is hard for Gainwell to accept after he appeared on his way toward becoming the No. 1 running back in this offense at one point. Being the third-down back is critical for the Eagles' rushing attack, which helps Gainwell embrace it.

"I know my role," Gainwell said. "And I play my role to the best ability I can. I don't take it for granted. I go out there and work extremely hard. Try to block as much as I can and when I do get the ball on third downs, I want to go out and execute."

Gainwell capped the career night with a 35-yard touchdown run late in the fourth quarter to put the exclamation point on the 31-point victory. The touchdown run was the longest in the NFL playoffs since Lamar Jackson's 48-yard run in the 2020 AFC wild-card round and was also the longest for the Eagles since Westbrook rushed for a 62-yard score in the 2006 NFC divisional round. [CBS Sports]

What are the playoffs without unsung heroes? You definitely don't get to the finish line without them.

Lane Johnson is a major factor in the Eagles' success.

One of the best offensive tackles in football, he's kept the right side as well protected as anyone and has done it for years now.

So when he went down with injury during the Week 16 loss to the Cowboys, understandably, there was concern, even more so when it was revealed as a torn adductor that would require surgery.

But Johnson opted to put that off until after the playoffs. He was coming back to play, but going in, no one was sure how much he could or how effective he could still be.

Turns out a lot and still extremely well.

He played all but the final series against the Giants Saturday night, when Nick Sirianni pulled the starters. Jalen Hurts was sacked just once and the Eagles ran for 268 yards total.

Make no mistake, Johnson's still hurting from the injury and will be going forward, but him being out there is a difference-maker for the Eagles and he knows it.

But Johnson made a selfless decision to push off that surgery in an attempt to deliver a second Super Bowl to Philadelphia. That sacrifice means everything to his teammates.

Johnson missed the final two games of the regular season and then rested up during the wild card round after the Eagles earned that No. 1 seed and bye week.

According to ProFootballFocus, Johnson had 26 snaps in pass protection and didn't give up a single pressure. [NBCSP]

What are the Eagles saying?

*A slight language warning before going into this one.

Darius Slay on the atmosphere in his first playoff game at the Linc.

We earned another opportunity! All Glory to GOD!!! #FlyEaglesFly

It's all about the people in this room@novacare | #FlyEaglesFly pic.twitter.com/raSRCmhtMy