Kenny Gainwell ran all over the Giants in Eagles' playoff win

Gainwell, after the best game of his career, picks up the latest "Who Won the Week in Philly Sports" award. 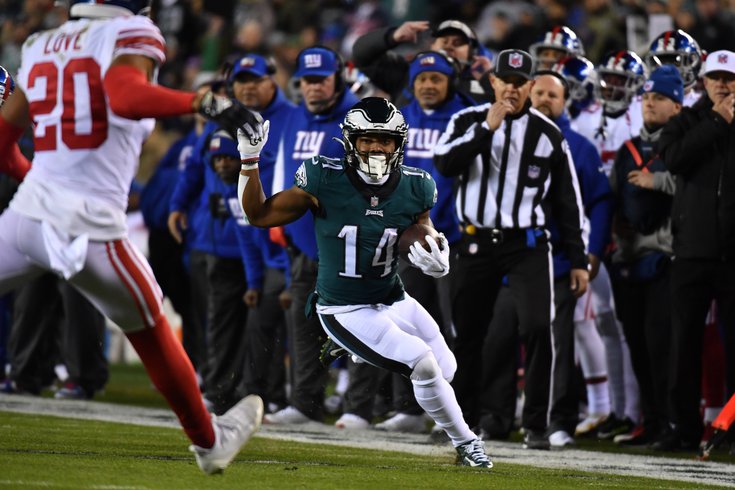 Eagles running back Kenny Gainwell exploded for 112 rushing yards against the Giants in the divisional round.

If you had to guess which backup running back was going to explode against New York in the postseason, the answer would've been Boston Scott, the famed Giant Killer. While Scott did find the end zone yet against this franchise in the Eagles' 38-7 divisional round win, it was second-year back Kenny Gainwell who carried the load with a career-high 112 rushing yards.

In a game where the Eagles completely throttled the Giants, embarrassing their longtime rival, there were ample choices for the player who "won the week" in Philly sports, my recurring Monday feature. This week's award could've gone to a few different people: Jalen Hurts being full go, Haason Reddick picking up 1.5 sacks in his playoff debut or James Bradberry's huge revenge game.

In a win this dominant, there was no clear-cut choice, but Gainwell hasn't had the spotlight in his Eagles career. Give him some props. Let's shed some light on him, an under-the-radar player for the Birds who typically has a role as a third down and two-minute drive RB, but was a key cog in the Eagles destroying the Giants.

While I know this Eagles roster is deep at the skill positions and I expected the Birds to cruise to a win, I would not have had "Kenny Gainwell has a top-five rushing performance in playoff franchise history" on my bingo card.

Here's the leaderboard (via StatMuse):

A Hall of Famer, an all-time iconic Eagles performance, the most versatile Eagles back ever... and then 5'9" Kenny Gainwell.

Off to the Races 🏇

Kenny Gainwell with a nice run up the middle to move the chains @KENNETHGAINWEL pic.twitter.com/p8Yf5JFpNe

Credit to the Eagles' offensive line for always imposing their well, but Gainwell's quick burst there illustrates him taking a mini leap in his sophomore season.

Gainwell should be remembered forever as the guy who ensured the Eagles would win 38-7 on the five-year anniversary of the legendary 38-7 NFC Championship Game against the Vikings. On third and nine right after the two-minute warning, Gainwell's attempt to hit an inside hole was stonewalled. He bounced outside, picking up a first down and a lot more. With some great downfield blocking by wideout Zach Pascal, Gainwell found the end zone for a 35-yard TD:

Kenneth Gainwell is the first #Eagles RB to have 100+ rushing yards in a post season game since 2006 pic.twitter.com/uQJjenoDsc

The Eagles were likely content with simply running out the clock. Though it certainly wasn't on his mind, the ability to recreate one of the most famous final scores in team history is a huge service to this passionate, crazed fan base that's unlike anything anywhere else.

A 31-7 beatdown of the Giants? Philly would've loved that and gloated about it until the end of time. A 38-7 win though? That's magical.

Howie Roseman loved it too, making good on his fifth-round pick investment in Gainwell in 2021:

All three Eagles backs had great nights on Saturday. Gainwell went off, Scott lived up to his Giant Killer moniker and Miles Sanders added 90 yards on the ground too in his second-ever postseason game. Are we in "three-headed monster" territory?

Of the many amazing football phrases and the lingo that's a part of this sport, I love "three-headed monster." That type of billing for a great running back rotation takes me back to the days of Duce Staley, Correll Buckhalter and a young Westbrook. That's before even getting to the trio of LeGarrette Blount, Jay Ajayi and Corey Clement on the 2017 Super Bowl champs squad.

I wouldn't be surprised if Sanders or Scott becomes the unsung hero of a later postseason win, whether this year or in the future. That's what happens when you have talented backs mixed with the best offensive line in the NFL. A winning formula!

Just throwing it out there... Gainwell is +450 to score a touchdown against San Francisco in the NFC Championship Game on DraftKings Sportsbook.