Rookie quarterbacks in conference championships have all lost

The 49ers' Brock Purdy is the fifth rookie quarterback to start a conference championship game. The other four QBs fell short of the Super Bowl. 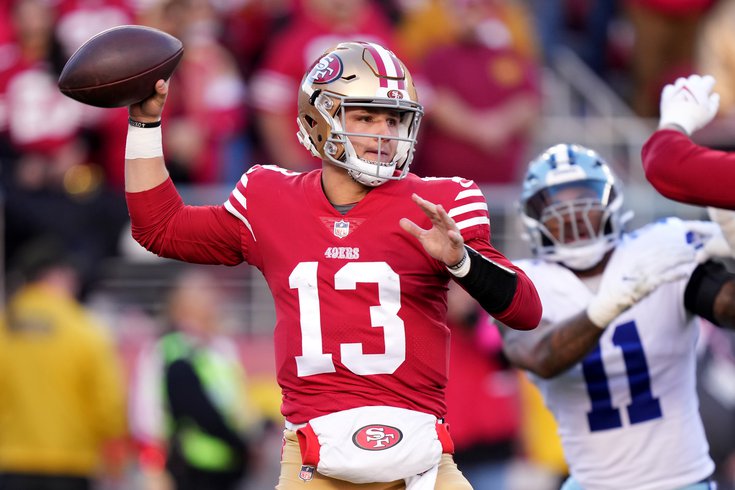 The final pick in the 2022 NFL Draft, "Mr. Irrelevant" is 7-0 as a starter in his pro career, including two playoff wins. He'll head to Philadelphia this weekend to take on the Eagles with a trip to the Super Bowl on the line.

How improbable is it that a rookie QB is starting a conference championship game?

Purdy will be just the fifth quarterback ever to do so. Here are the other four:

What do they all have in common? They lost that game.

• Flacco started all 16 games as a rookie in Baltimore, going 11-5. He won Wild Card and Divisional Round playoff games, too. Roethlisberger and the Steelers, however, took down the Ravens in the AFC title game 41-27 en route to Pittsburgh's sixth Super Bowl.

• For a Wild Card Jets team, Sanchez won back-to-back road playoff games as a rookie over Cincinnati and San Diego. Peyton Manning's Colts beat them 30-17 to head to Super Bowl XLIV though.

All four of those guys' stats weren't spectacular in their respective title games either, with Sanchez turning in the only performance that wasn't bad.

This isn't predictive, of course, but does illustrate how tough it is to thrive in this environment when you lack big-game experience. Purdy has had clear-cut success and deserves props for leading San Francisco this far, but balling out in front of a raucous crowd of 69,000 Eagles fans is a whole different animal.

Purdy had a great statistical performance in the 49ers' Wild Card win over Seattle, tossing three touchdowns with 332 yards and zero interceptions. He regressed a bit against a good Dallas defense this past weekend, throwing for 214 yards with no TDs or picks.

Some of his balls have been interceptable, but Purdy's lucked out. He sailed a few early on in that Seahawks game, which had the 49ers actually trailing 17-16 at halftime. Facing a ball-hawking secondary that includes NFL interception leader C.J. Gardner-Johnson plus the cornerback duo of Darius Slay and James Bradberry, Purdy will not get away with those mistakes as easily.

During his career at Iowa State, Purdy had seven multiple-interception games, including four games where he tossed three picks.

Working in Kyle Shanahan's offense and throwing to the likes of Deebo Samuel and George Kittle is just a tad different than playing in Iowa, but Purdy wasn't drafted 262nd overall out of spite. There were some concerns and Shanahan's elite scheme and perhaps the best collection of skill position players in the league can mask a lot.

The biggest test a seventh-round rookie has ever faced comes at 3 p.m. on Sunday afternoon.