Buying Eagles playoff tickets on Ticketmaster is a disaster 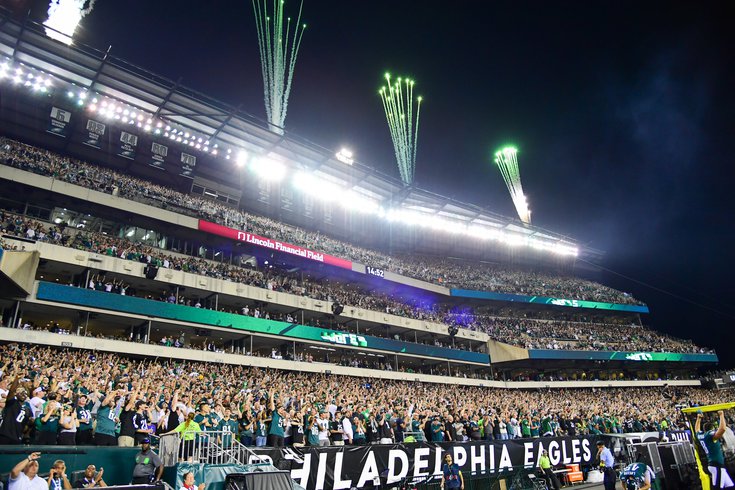 Lincoln Financial Field fired up ahead of the Monday Night Football game against the Vikings back on September 19.

The Eagles' home-field advantage with nearly 70,000 screaming Philadelphians at Lincoln Financial Field is unmatched. With the Birds hosting the NFC Championship Game on Sunday, the Sports Complex is going to be a wild scene. That's if you can even get into the game.

Playoff tickets for the Eagles' matchup with the 49ers went on sale Tuesday morning and the results were predictability a mess given Ticketmaster's history.

Fans are not happy about the thousands of people in a queue simultaneously, which they ultimately viewed as a futile effort.

Stephane Hardinger is one such Eagles fan. He summed things up succinctly:

Hardinger went on to say, "Trying to get Phillies and NLCS World Series tickets on Ticketmaster was difficult and frustrating, but at least it seemed there was a chance, however small, of a actually ending up with tickets. Not so with the Eagles."

He claimed that he's be in this queue for 40 minutes and is hopeless that he could end up with tickets. "Obviously they're sold out. Just tell me that," Hardinger said. He prefers the lottery system the Phillies used for those postseason tickets, which he believes evened the playing field.

i’d say you’re demise will be televised, but it literally is rn @Ticketmaster pic.twitter.com/DoOufblrQM

Ticketmaster is getting put on blast.

If you're still trying to attempt to get tickets for the NFC championship through Ticketmaster this is what you'll still see when you log on#Eagles #49ers #NFCChampionship #SFvsPHI #NFLPlayoffs pic.twitter.com/KKqoYkSWwS

The Ticketmaster hate continues to seep through Philadelphia:

i knew i probably wasn’t gonna get eagles tickets but getting booted when u make it to the front of the line is whack af @Ticketmaster pic.twitter.com/hmVIxrNbCg

Hey @Ticketmaster and @Eagles there has to be a better way. I was in queue at 947am. Tickets weren't supposed to be up until 10. I'm still sitting in queue at 1042am and only here... I'm hearing only resale tickets are available now. Please do better. pic.twitter.com/sXjLe3m5FN

The ticket sales company offers "verified resale tickets" listed on their website at highly marked up prices, leaving fans to speculate about how many tickets they even released to the public to buy to begin with:

@Ticketmaster really had us wait in a que get through and offered resale tickets only what joke @Eagles we need to do better pic.twitter.com/BDCKFxALrj

I can think of few services that are as universally disliked as Ticketmaster. They make the IRS seem beloved in comparison.

With all these fans having no luck on Ticketmaster, the secondary ticket market isn't going to be much help. The cheapest ticket available on SeatGeek is $706 with fees. A daunting price for sure, but, hey, seeing your favorite football team make the Super Bowl in person is a hell of an experience.