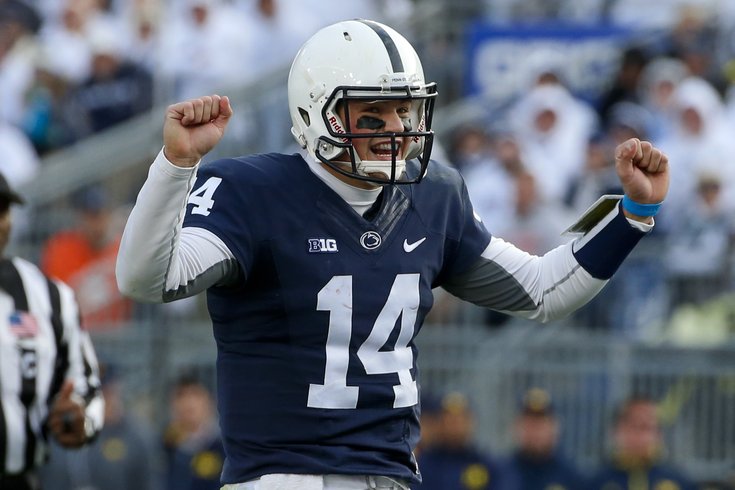 Yeah, I know. This won't happen, and I'm the worst.

With the first week of free agency basically in the books, the Eagles have completed their heavy shopping. From here on out, I would expect them to sign a veteran wide receiver or two, as well as some other pieces for depth, but I would not expect anymore big splashes.

And so, with the roster having a bit more clarity, we look for any excuse to put out a new mock draft! Because page view$$$.

With Jason Peters' career winding down, the Eagles are in need of long-term answer at offensive tackle.

Stanley is one of my favorite prospects in this draft. I watched two of his games last year against two completely different types of edge rushers. The first was against Florida State, when he battled Mario Edwards all day. Edwards goes 6'3, 280, and is a powerful defensive end who was selected 35th overall in the 2015 NFL Draft. Edwards didn't catch a whiff of Notre Dame's QB, and he was moved off the line of scrimmage all day in the run game. The other game was against LSU's Danielle Hunter, who is an athletic freak. Very different type of player, same result.

Stanley is a slam dunk Day 1 starter in the NFL. He is extremely athletic, with very quick feet. It would have been highly unlikely for him to fall to the Eagles at 13, but at 8 he could be in play. Drafting Stanley might tempt the Eagles to just leave Lane Johnson at RT and let Stanley fill in at LT.

The difference in importance between LT and RT is wildly overrated, as defenses often put their best pass rusher opposite the RT. For example, Von Miller, J.J. Watt, and Justin Houston primarily line up against the RT. You need two good bookends in the NFL, and the Eagles would be set for the foreseeable future with Stanley and Johnson.

In the short term, the Eagles could maybe have Stanley play LG for year before moving on from Peters in 2017, or they could potentially look to deal Peters for another draft pick.

There are two things that stand out above, and both are major negatives.

First and foremost, Hackenberg's completion percentage is not only putrid, but it's actually worse than it looks because Penn State throws so many short passes. Secondly, his TD-INT ratio in 2014 was awful, as he threw more picks than touchdowns.

Back in November, we published a review of Hackenberg. I watched four of Hackenberg's games from his library on DraftBreakdown.com. The first three games were against quality defenses (vs. Temple in 2015, and vs. Michigan State and Ohio State in 2014). His performances were so bad in those games, that I actually went to his game log, and picked out his best statistical game in 2014 to see if I could find something positive to say, which happened to be against Boston College.

Unfortunately, there wasn't anything all that impressive there either.

Having said the above, there's little doubt Hackenberg has a strong arm, and the ball comes out quickly once he decides to let it rip, with little effort. Hackenberg has also had some excuses made for him, namely that head coach James Franklin's offense was garbage, as was the offensive line.

Some team will see Hackenberg's tools and think they can coach him up. With two former quarterbacks and three former/current quarterback coaches on their coaching staff, the Eagles are a logical pick to be that team.

This is a very real scenario if the Eagles don't take a quarterback with the eighth overall pick. Sorry.

Remember the days when the Eagles had a 4-3 defense, and they always loaded up on defensive line talent, even with good players in place? "Fastballs," and whatnot? That's coming back.

Ridgeway had six sacks from his interior defensive line spot in 2014, and has talent as a pass rusher. However, he had a variety of injuries in 2015, and had conditioning issues at Texas. If the Eagles think they can motivate Ridgeway and still believe in their sports science program with Chip Kelly gone, Ridgeway could be a good value in the third round if teams pass on him because of those concerns.

While a lack of conditioning shouldn't be minimized, an argument could be made that it is less important for a team that plans on utilizing a heavy rotation of talented defensive linemen.

Perkins carried the load for UCLA over the last two seasons for the Bruins.

However, it is unlikely he'll be used as a workhorse back in the NFL. Perkins has a lot of LeSean McCoy in his game, as he is a very shifty runner who often makes defenders completely whiff on tackle attempts. Here is my personal favorite example, against Stanford:

Perkins is also effective as a receiver, as he had 80 receptions over his three-year college career, although those mainly came on simple short passes.

Perkins is probably not a three-down back, as he is not a runner who is going to consistently fall forward after contact. That is likely going to force him off the field in short yardage and goal line situations at the pro level. There will also be concerns about his ability to pass protect because of his small size, although he was a willing blocker at UCLA.

Because he is likely to "only" be a back who is part of a committee, that may push him down some draft boards, but he could be very good as a committee back, and would constitute good value in the fourth round.

Davis reminds me a bit of Eagles CB Eric Rowe, in that he has great size and he lit up the Combine. His measurables compared with other corners competing at the Combine since 1999:

The difference is that Rowe showed good coverage ability in college, while Davis often struggled in man coverage. At the next level, he'll likely move to safety. Davis is a big hitter who is willing to throw his body around. Over the last three seasons, Davis has racked up an extraordinarily impressive 306 tackles, and in 2015, he forced five fumbles as a cornerback.

Some team may fall in love with his size/athleticism and draft him a little too early, but if he were to fall here to the fifth round, Davis would be a steal.

Unlike Davis above, Boehm's Combine spider chart is awful. Here's how Boehm compares to centers competing at the Combine since 1999.

Boehm's 10-yard dash of 1.91 seconds is atrocious. He is not going to remind anyone of Jason Kelce. However, what Boehm does is move defensive linemen off the line of scrimmage against their will, which is a rare trait for centers in the NFL these days. He also played 52 consecutive games at Missouri, both at LG and C, which means he'll play through pain, and he is regarded as a very smart player.

The Eagles gave Kwiatkowski a little extra attention at the Senior Bowl, so they may have some interest, which makes sense. Over the last three seasons, he has racked up 275 tackles, with decent pass breakup numbers in 2015 from his linebacker spot:

Kwiatkowski played safety in high school, and then all three linebacker spots as well as special teams for the Mountaineers. That versatility could make him a late-round target as a versatile reserve linebacker. He is also a physical tackler, which was a common theme from the acquisition the Eagles made in free agency for Jim Schwartz's defense.

Staying on the theme that Jim Schwartz has "a type," and that type is "physical," Burris should be a clear player of interest. In his last season at NC State, Burris was credited with a grand total of zero missed tackles. The Eagles could look at Burris as an immediate contributor on special teams as well as a depth at corner.

Stick him on the practice squad and see if Jeff Stoutland can develop him into a reliable backup.