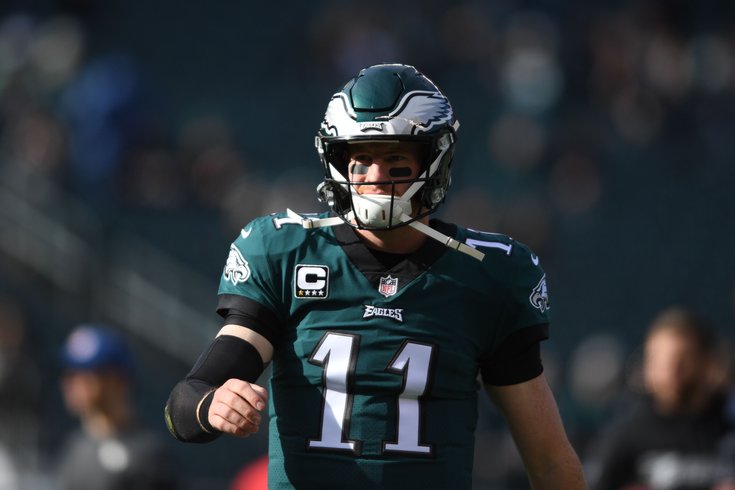 After completing their first round of OTAs last week, the Philadelphia Eagles were back out on the practice fields once again on Tuesday in front of the media. Here's what I saw:

• Carson Wentz looks no different than he normally does in practice, which is another way of saying that he looked really good. The obvious thing that stood out was how many times he was able to hook up with DeSean Jackson. It feels a lot like Wentz is going out of his way to try to build rapport with Jackson, and so far so good on that front.

While they didn't connect on any go routes, Wentz was able to find Jackson on a variety of 10-15 yard in-breaking and out-breaking routes. Because opposing defenses have to respect Jackson's speed over the top, those 10-15 yard in/out routes can be money-stealing chain-movers.

Wentz did find Jackson a little deeper down the field on a bang-8 route that went for a TD, and they also connected for a TD (I didn't see the route) inside the red zone.

• Wentz's throw of the day is debatable. There were a few to choose from. One beauty was a touch pass about 20-25 yards down the sideline to Zach Ertz over L.J. Fort. Another was a red zone back shoulder fade that J.J. Arcega-Whiteside plucked out of the sky over Sidney Jones for a TD. If Wentz and Arcega-Whiteside can master the timing of that route, it'll be very difficult to stop. Jones' coverage on the play wasn't even bad. It was just perfect ball placement to a guy who is very good at making contested catches in the end zone.

"When you have the body control and the concentration that he does in addition to the size and the length, that stuff usually translates (to the NFL level)," Mike Groh said of Arcega-Whiteside today. "You can say if somebody is next to him, he's probably going to be able to make the catch. I think that has shown up. He's made some really good catches early in the time he's been here, and I think he'll only continue to get better at it now that he's just doing football all the time."

• Nelson Agholor also made a high number of catches working the middle of the defense. Agholor showed up to camp this year ripped, and he has looked good through the first two practices. He has been trying to take on something of a leadership role, as he was trying to give pointers to some of the UDFA receivers after their reps.

I'll also note here quickly that Wentz and Agholor have their own hand shake this season. First they slap hands, and do a little jazz fingers thing, as shown at the 5:40 mark of the Chappelle's Show "Racial Draft' sketch:

"We think he's a versatile player and that he has very good ball skills and can catch the ball out of the backfield," Groh said of Sanders as part of a longer answer, when asked what the Eagles liked about his skill set.

Like Smallwood and Clement, Sanders did not have much production in the passing game at Penn State. We'll see if he's more like Smallwood or Clement in the pros soon.

(On an unrelated note, Sanders did not practice again, just FYI.)

• Speaking of running backs catching the ball out of the backfield, the Eagles think that Jordan Howard is better at it than people give him credit for. Today, he caught a swing pass while in a full sprint. That doesn't exactly make him Marshall Faulk, but it's really all they need from him, and he looked comfortable catching the ball while on the move.

• Defensively, Kamu Grigier-Hill had a good day. He picked off Clayton Thorson in 7-on-7's, and had a nice pass breakup in the end zone while covering Dallas Goedert.

• Six-foot-six wide receiver Carlton Agudosi is a stone-cold lock to be the training camp fan favorite this year, in the big receiver tradition of Ifeanyi Momah, and others. Agudosi legitimately did have a nice play when he out-jumped Avonte Maddox and Rasul Douglas on a deep ball down the field. In a few months, I look forward to some national reporter dropping in on Eagles camp for one day and wondering why nobody is talking about him.

• The Eagles' third-team offensive line had three straight do-overs today. On the first play, the center snapped the ball too early, and the play was whistled dead. On the next two plays they had false starts. Hot take of the day: If the Eagles' third-team offensive line had to face the 1985 Bears in a game today, I think they might be in trouble.