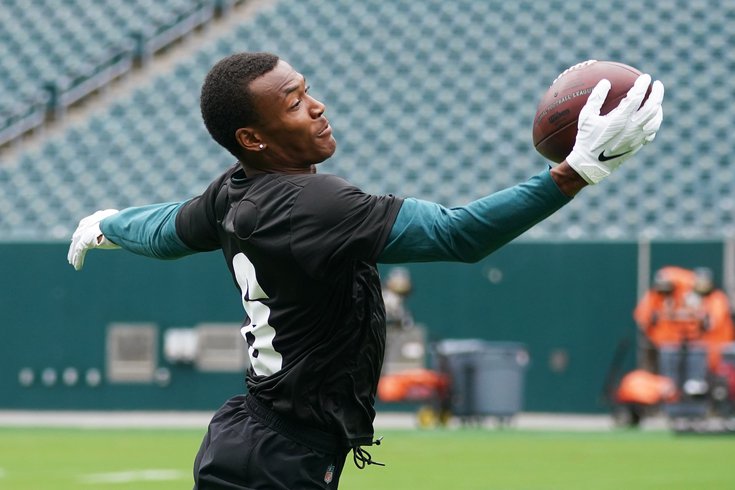 The Philadelphia Eagles had their second (and final) media-attended OTA practice of the offseason on Friday at Lincoln Financial Field. We won't see them practice again until training camp begins in late July. As always, we have some notes, though we were only allowed to watch the warm-up and individual drills portion of practice.

• Let's just get right to DeVonta Smith, I suppose. He made a good catch in the end zone, against air.

Smith is only 6'0, but you can see that he still has a decent catch radius, and you get a glimpse of his coordination (or body control, if you prefer), as well as his field awareness. Nice catch, nice toe-tap. No big deal for him.

MORE: Mailbag: Will the Eagles sign Steven Nelson with the savings from a Zach Ertz trade or release? | WTS: Eagles had one of the NFL's worst offseasons — but also made one of the biggest upgrades?

And here's a nonchalant, one-handed grab by DeVonta, captured by Tim McManus:

• An early theme of Nick Sirianni's practices are these fun little competitions, in front of the whole team. Early in practice, Smith went up against Travis Fulgham in the following "football on a string" competition.

Football on a string competition between DeVonta Smith and Travis Fulgham... pic.twitter.com/udsfTr0IKL

Neither receiver dropped the ball, and it seemingly would have gone on for a while longer, so they just ended it. The team had a second competition between the defensive backs later in practice, but it was on the other side of the field, and the wall of players blocked the view. The Eagles' film crew had cameras out there, so if they tweet that DB competition later, we'll add it in.

Those little competitions seem to be a good way to sort of break up the boring parts of practice and keep players engaged. I assume that's partly the design of them, anyway.

• We're also just getting used to the new drills this staff is bringing with them. Here's a running back drill designed to strengthen tight ball security.

The backs knew the ball was going to get jerked by the rope, and they still often couldn't hold on, like here:

That's a super tough drill. It'll be fun watching to see if they improve on that drill as camp progresses, assuming they continue to go back to it.

• We got a glimpse of the wide receiver configurations. DeVonta Smith and Jalen Reagor were the outside receivers with the first team, with Greg Ward in the slot. Travis Fulgham and Quez Watkins were second team, with J.J. Arcega-Whiteside in the slot.

JJAW's appearance in the slot makes sense. He's simply too slow to play on the outside, but maybe he can find a niche role going up against smaller slot corners on the inside? At a minimum, he'll at least be a good blocker in the run game in that role. Does that do anything for any of you? Ha.

• First team and second team offensive lines were as follows:

Andre Dillard was not at practice. Landon Dickerson was present, but he did not participate in that part of the practice.

• So that's about it. We weren't there very long. I'll just leave you with this Arryn Siposs punt.