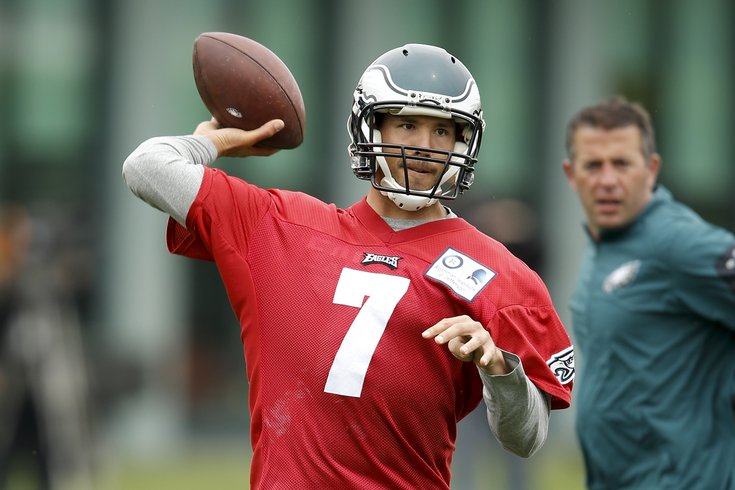 Sleeves had a nice day.

On the second day of media access to Eagles OTAs, Sam Bradford was very sharp. He missed a wide open Zach Ertz on a sideline throw, but otherwise, Bradford was very accurate, delivering the ball with good placement and allowing receivers to get yards after the catch.

• Doug Pederson got on Ertz for not getting down the field quickly enough on a pass play. Pederson wanted better spacing between the Eagles' receiving options so that the quarterback could more easily diagnose the defense. That is what Pederson and the Eagles' quarterback-focused coaching staff is going to do well. They're going to have a better idea how to coach other offensive players how to make the quarterback's life easier.

• The Eagles' defense stunk today. There were wide open receivers all over the field, and the defensive line must have jumped offsides on at least a half dozen occasions. "You guys saw practice today," said defensive coordinator Jim Schwartz. "We have enough problems on defense right now."

• I don't know what happened last year in the games that mattered, but there's no question Nelson Agholor is talented. He snatched a deep crosser with his hands away from his body over the middle and then turned on the jets, running away from the safeties for a score. His acceleration is very impressive.

• Here's what the Eagles' first-, second-, and third-team defenses looked like today:

Beau Allen did not practice again, and obviously, Fletcher Cox remains away from the team. Alex McCalister got some reps with the third-teamers as well.

Jordan Hicks practiced after being out a week ago.

Nolan Carroll was out once again. Jalen Mills got a lot of reps with both the first- and second-team defenses as the nickel corner.

• Rookie linebacker Joe Walker was singled out for having a bad day by Jim Schwartz, but he did jump a route for a near INT. (He dropped it).

• Chase Daniel took off running once today. Decent wheels - not bad, not impressive. I'd compare his speed to Mark Sanchez.

• As noted above, Jalen Mills got a lot of reps with the ones and twos. His best moment of the day came on a pass breakup on a deep ball intended for Jordan Matthews. Rookie safety Blake Countess also had a nice pass breakup on a red zone throw to Agholor.

• One UDFA WR I like so far: Cayleb Jones. One who struggled catching the football today: Hunter Sharp.

• Cody Parkey kicked for the first time today. He cleared a few 43-yarders with ease. He said after practice that he's still not doing kickoffs for now until his groin feels more comfortable. Parkey's battle with Caleb Sturgis will be something we will monitor throughout camp.

• I didn't time his punts for hang time, but Donnie Jones was crushing it today.

Carson Wentz's throws were wobbly at times today. He wasn't inaccurate or anything. They were mostly on target, but they often weren't tight spirals. That's pretty normal from what I've seen in the past from rookie quarterbacks. College footballs and pro footballs are not the same, so it's not out of the ordinary for quarterbacks to adjust where they place their hand and fingers on the ball.

Wentz's highlight of the day was a play in which the pass rush was collapsing on him. While climbing the pocket, he tripped on a lineman's foot, and started to fall. While falling to the ground, he was able to turn his body, and still complete a throw with enough power to get to the sideline. Carson Wentz might throw harder while falling to the ground than Matt Barkley with a full head of steam.

Another Wentz highlight came on a play action look in which he faked a handoff to the running back, moved the safety with a subtle pump to the left, and then came back to the right, hitting Chris Givens deep down the sideline on a well-thrown ball. He looks the part.