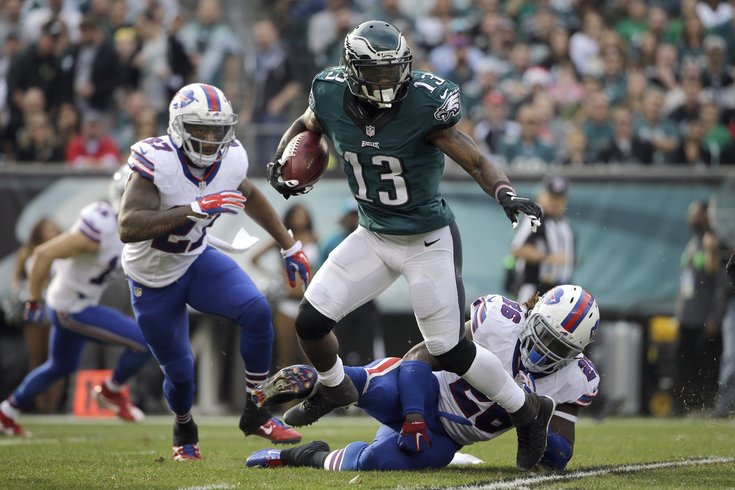 That guy from Oregon isn't the coach anymore, Josh.

There's an NFL philosophy that says that players will make a big jump in their third year in the league. Whether or not you buy that, in the Eagles' case, the 2014 draft class better start producing, and soon.

Oddly enough, for as unproductive as the 2014 draft class was, they're all still on the team (although Jaylen Watkins and Ed Reynolds have both been released in the past before re-joining the team). A recap:

We'll go one by one:

• Marcus Smith, LB: In two years, Smith has seven tackles and 1.5 sacks. There's not much more that needs to be said than that. In year three, he'll be transitioning from a 3-4 OLB spot that (in theory) best fit his skill set, to a 4-3 DE spot where he could be out of place. Just as concerning for Smith is that he has not even been able to play much on special teams, when clearly, he has more physical ability than other players who do. It's do or die for Smith in 2016, and optimism should be low.

• Jordan Matthews, WR: Matthews is the only legitimately productive player from the 2014 draft class. In two seasons, he has 152 catches for 1869 yards and 16 TDs. Here's how that compares to DeSean Jackson's and Jeremy Maclin's first two seasons in the pros:

At a minimum, Matthews has already proven that he is a very good volume catcher who can work the middle of the field from his slot position. To be determined if he can be an every-down player who can also play on the outside. The 2016 season will help determine that, as Matthews is expected to get more opportunities on the outside. He'll also have to cut down on his drops.

• Josh Huff, WR: Huff has shown impressive flashes of ability, but they have been few and far between. In two seasons, Huff has just 35 catches for 410 yards and 3 TDs, and now he has legitimate competition in the form of free agent signing Rueben Randle for the No. 3 receiver job.

• Jaylen Watkins, DB: With an overabundance of "guys" at corner, the Eagles had Watkins working out at safety in OTAs. In my opinion, that is a bad fit, as Watkins is not a particularly strong tackler. Watkins has a lot of competition to deal with in camp this summer.

• Taylor Hart, DL: In two years, Hart has 27 tackles and no sacks. Like Marcus Smith, the Eagles' switch from a 3-4 to a 4-3 will likely negatively affect him. Hart had the length to two-gap in Chip Kelly's 3-4 front. Now he'll have to show that he can be a quick-twitch penetrating DT in Jim Schwartz's scheme.

• Ed Reynolds, S: The Eagles are set at the starting safety spots, but there's a wide open vacancy for Reynolds to leave no doubt that he should be their primary backup. He'll have to hold off rookie seventh round pick Jalen Mills. Reynolds has twice been released by the Eagles already.

• Beau Allen, DL: With 38 career tackles, the Eagles got decent enough value by drafting Allen in the seventh round, but Allen will have to show that he is more than just a guy the Eagles have to put in when Fletcher Cox and Bennie Logan need a breather. Can he assert himself as a plus situational run stopper? I'm not so sure we've seen that just yet.