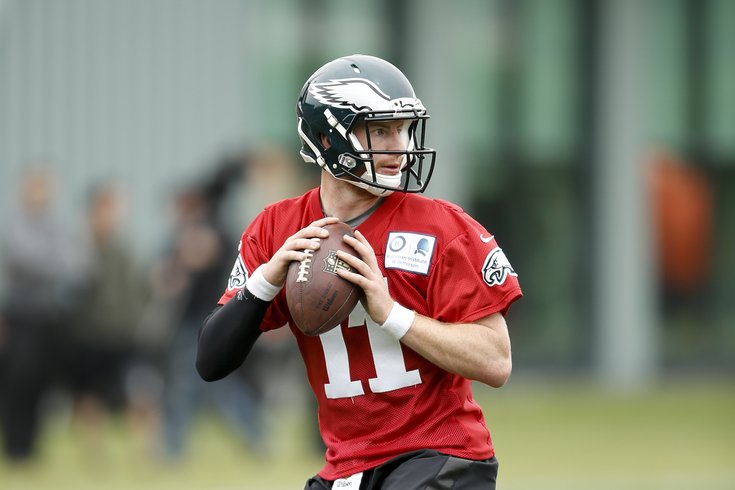 Every year prior to the draft, Bob McGinn of the Wisconsin Journal Sentinel does a series on draft prospects and what anonymous scouts are saying about them. Without fail, it is always one of the best reads of the calendar year.

The guys over at BGN had the good idea of going back and seeing what McGinn heard about the Eagles' draft picks prior to the draft.

CARSON WENTZ, North Dakota State (6-5, 237, 4.69, 1): "Prototypical," one scout said. "I see everything. Arm strength. Accuracy. Toughness. Athletic ability. Smart. Great kid." "He's a genius, Wentz is," said another scout with knowledge of Wentz's 40 on the Wonderlic. "He could be really good. He's the best runner, he's the best athlete. He is off the charts." Fifth-year senior from Bismarck, N.D., who didn't start a game until his fourth year. Finished with passer rating of 105.3. "He gets away with things in that league (Missouri Valley) that he wouldn't get away with in the SEC," a third scout said. "He tries to throw in tight windows. Even in the (FCS) title game he threw two picks. The guy he reminds me of is (Blake) Bortles. Everybody was so excited about Bortles because of the height and the athletic ability, and this guy has the same thing. At least Bortles played against big-time competition. At this point I just don't see where he's that accurate of a passer." Compared by that same scout to Ben Roethlisberger. "He's big, athletic and has a freaking cannon," a fourth scout said. "Level of competition is the only thing. I'd sit him for a year and a half, two years. Then I got a real starter. He'll be shoved into the fire too quickly and it may crush him."

If you've read McGinn's anonymous scouting pieces in the past, you'll know that the above is about as effusive as praise gets. The scouts in his pieces are typically beyond brutal, and pull no punches when they offer their opinions of players' flaws, especially quarterbacks. They're like mean high school girls.

For example, here are some of the things they said about the other quarterbacks who were listed in the top five:

• Jared Goff, Cal, drafted first overall by the Rams: "I just don't see him having that winner quality about him," a third scout said. "His arm isn't great. They do a lot of that dink and dunk offense, a lot of that false production. He gets rattled by pressure. Everything has kind of got to be under control for him. He couldn't win there and you want him to be the face of your franchise?"

• Paxton Lynch, Memphis, drafted 26th overall by the Broncos: "The overall maturity level and disposition, I'd be a bit concerned. Big kid, strong arm. But he's a ways away mentally."

• Connor Cook, Michigan State, drafted in the fourth round by the Raiders: "He stinks," a third scout said. "Wildly inaccurate (57.5% career). Average arm, average mobility, average field vision. Not a leader. Not aware. Someone will take him in the second, third or fourth round and he's going to disappoint. The owner needs to fire the GM right after they pick him if someone takes him in the first."

• Christian Hackenberg, Penn State, drafted in the second round by the Jets: "People can make every excuse in the book for him but he just hasn't done it," another scout said. "He was a Bill O'Brien guy and he had some issues with Franklin. He hangs out more with managers than he does teammates. It tells me he likes to be king of the little people rather than king of the big people."

And here's what some scouts said about Jameis Winston, who was drafted first overall a year ago:

"Jameis has gotten too big," said a third scout. "In high school (Bessemer, Ala.) he was a quick-twitch athlete. Now he's kind of sluggish." Posted dismal workout numbers at the combine. "I had no idea he'd run that poorly," a fourth scout said. "Quarterbacks without leg explosiveness have a terrible history. I don't like his off-field and I don't like the way he conducts himself on the field sometimes."

So what's the point here?

The point is that there isn't much to dislike about Carson Wentz. He's big, he has a strong arm, he's mobile, he's smart, he has a quick release, and he's competitive. If you're going to nitpick, you can maybe ding him a little for his accuracy, which is still good by the way, and the fact that he played at a lower level in college.

Even NFL scouts, who are some of the cattiest humans on the planet, couldn't find much in the way of criticism of Wentz.