Why did Doug Pederson name Allen Barbre the starter at LG? 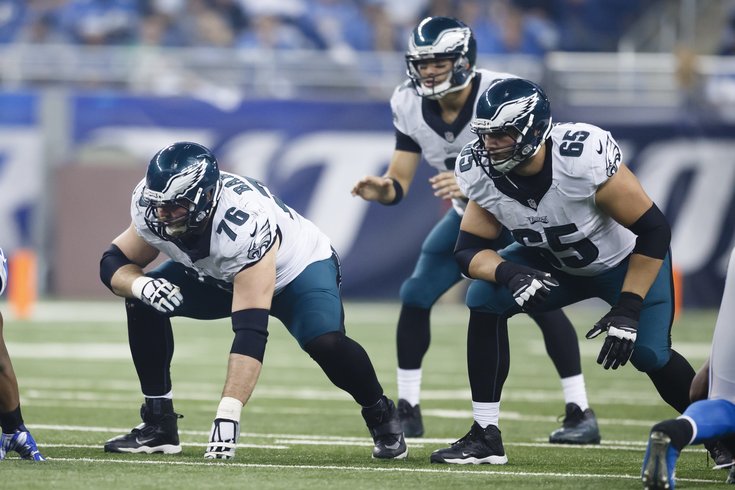 On the first day of locker room access, it was interesting to see the back right wall of locker stalls seemingly in order of the offensive line starters. They were, in order, LT Jason Peters, LG Allen Barbre, C Jason Kelce, RG Brandon Brooks, and RT Lane Johnson.

Heading into OTAs, it was assumed by most that four of the Eagles' five offensive line starting spots were obvious, with the LG spot thought to be up for grabs.

During the first round of OTAs, Barbre did indeed get reps with the first-team offense, as we noted in our practice recap. Here were the first-, second-, and third-team offensive line units:

To note, rookie third-round pick Isaac Seumalo (not listed above) will miss a chunk of OTAs because his college (Oregon State) runs on the quarters system. Seumalo is a logical player to compete for that job, as is free agent acquisition Stefen Wisniewski, who has started all 77 games of his five-year pro career, mostly at center, although he has experience at LG as well.

And then there's Andrew Gardner, who was not thought to be much of a threat to win a starting job a year ago, but earned it in camp before being lost for the season with a Lisfranc injury Week 3 against the Jets.

Or how about Matt Tobin, who did not play well as a starter at RG a year ago, but wasn't all that much worse than Barbre.

And then there are younger guys like Malcolm Bunche and Josh Andrews, who could emerge with another season in the league under their belts.

When asked if Pederson would rotate guards in and out of the first team lineup, Pederson indicated that was not the plan. "Right now it is Allen Barbre's job," he said, "and I think again that's something we did through the draft and a little bit of free agency is to kind of shore up that spot. I really like where we're at. I like the depth at that position right now. But yeah, Allen Barbre is my guy and he's our starter."

Barbre did not play well a season ago, and he'll turn 32 in June. He also counts for $1,950,000 on the cap in 2016, $1,650,000 of which the Eagles could save if he were to be cut or traded. It would be a significant benefit if one of the Eagles' younger and cheaper options were to outperform Barbre and win that job outright in camp. It's somewhat puzzling why it's Barbre's to lose.