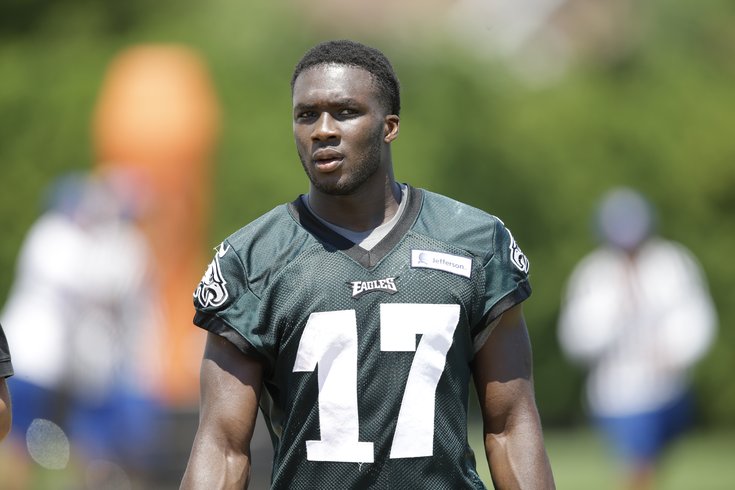 Nelson Agholor will sit out against the Packers tonight.

The Green Bay Packers will head into Philadelphia to face the Eagles with eight players listed on their injury report, in addition to two key players on injured reserve. The Eagles list just two players on theirs.

The big news, however, is that the Eagles have indeed decided to bench struggling wide receiver Nelson Agholor.

Here are the Eagles-Packers inactives:

• WR Nelson Agholor: Agholor's performance against the Seahawks was a new low in a disappointing start to his career when he cost the Eagles a touchdown by not lining up properly, followed by an egregious drop that negated another big play. The Eagles finally decided to sit Agholor in favor of undrafted free agent wide receiver Paul Turner.

• RB Ryan Mathews: Mathews is out with an MCL sprain, suffered against the Seahawks last week. On the season, he has 102 carries for 427 yards (4.2 YPC) and seven touchdowns. Darren Sproles was also injured last week, but Doug Pederson expects Sproles to be a go with a full workload Monday night.

• RG Brandon Brooks: Surprise inactive, as Brooks was hospitalized with an illness earlier today. Rookie third round pick Isaac Seumalo will start in his place.

• OT Halapoulivaati Vaitai: With Vaitai out, Allen Barbre will slide over to RT, with Stefen Wisniewski filling in at LG.

• DT Taylor Hart: Hart was signed a few weeks ago in anticipation of Logan being out, but he has not yet been available for any game yet. Now he's a healthy scratch.

• DE Steven Means: Means toggles back and forth between being active and inactive. With a relatively healthy lineup, Means will be inactive tonight.

• OL Dillon Gordon: Gordon is a versatile player the Eagles want to develop over time, but he'll be inactive for the foreseeable future.

• CB Ron Brooks (IR): As a player, Brooks isn't exactly a world-beater, as he doesn't have a single interception, sack, or forced fumble over his five-year NFL career, however, his loss will further deplete an already thin group at cornerback. In Brooks' absence, Malcolm Jenkins has dropped down into the slot in nickel packages, with Jaylen Watkins coming off the bench to play safety.

• RG T.J. Lang: Lang is the starting RG for the Packers and a very good one. In his absence, Don Barclay has not played well.

• C J.C. Tretter: Tretter is the starting C for the Packers, and again, a good one. In this case, the experienced Corey Linsley fills in at center.

• LB Blake Martinez: Martinez is a starting linebacker for the Packers, who has 63 tackles and one INT this season. Martinez is a rookie fourth-round pick.

• LB Jake Ryan: Ryan is a starting linebacker for the Packers. He has 59 tackles this season for Green Bay.

• OLB Kyler Fackrell: Fackrell has 16 tackles as a reserve defender and special teams player. Fackrell was the Packers' third-round pick this year.

• DT Christian Ringo: Back of the roster guy.

• RB Eddie Lacy: Green Bay has not had much of a threatening rushing attack ever since Eddie Lacy went down with an ankle injury, and even before that, they weren't exactly steamrolling anyone. In five games this season, Lacy had 360 yards and no touchdowns on 71 carries (5.1 YPC).

• CB Sam Shields: Shield's absence has contributed to Green Bay's pass defense woes, as they are allowing an awful 8.6 yards per pass attempt.