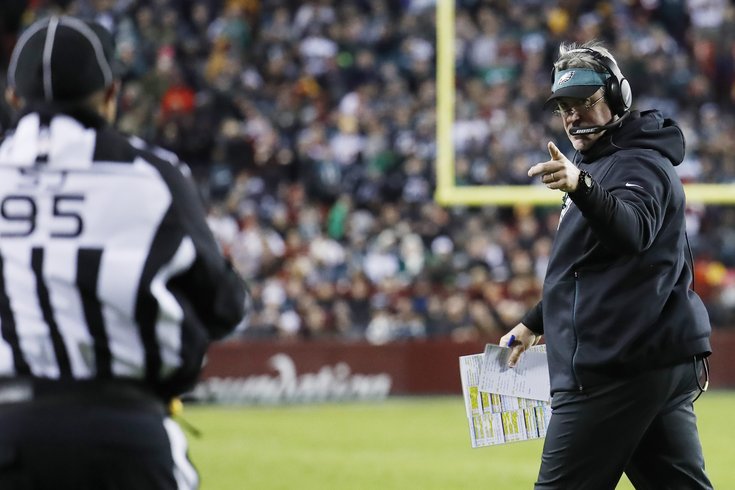 Knowing he was playoff-bound, Doug Pederson tells an official to warn Clete Blakeman that he knows where Blakeman lives, should he officiate an Eagles' playoff game.

Here's where people around the country have the Birds ranked after the final week of the 2018 NFL season:

New Year's resolution: Make the most of their second chance. The Eagles rallied late and got a little help to break into the playoffs. The defending champs have a shot to defend their title, and they plan to make the most of it.

#JimmySays: The Eagles are the NFL's biggest underdogs wildcard weekend, which jibes with their 12th ranking here, the lowest of the playoff teams.

Doug Pederson did a great job down the stretch, after all seemed lost. On a day with so many firings, many pointed out that of the seven coaches hired in 2016, only Pederson remains.

#JimmySays: I was among them!

Gotta feel for Carson Wentz as he watches another playoff push from sideline while Nick Foles is once again hailed as Philly’s savior.

#JimmySays: He'll be fine when he gets $100 million guaranteed this offseason.

During this win streak that kept their season alive, the Eagles have looked a lot like the team that ran through the playoffs last year. Just one difference: This team does not have home-field advantage. Philadelphia also isn’t dominating the line of scrimmage like it did a year ago. The Eagles are still dangerous, and it wouldn’t be shocking to see the team pull an upset in Chicago, but a matchup with the Saints awaits in the Divisional Round, which is where the Eagles’ title defense ends.

#JimmySays: They absolutely have dominated the line of scrimmage in the last three games.

Nick Foles has this team back in the playoffs. Can he do it again and get them into the Super Bowl? It won't be easy, that's for sure.

#JimmySays: "It won't be easy, that's for sure," lol. This column has the worst analysis, week in and week out.

Nick Foles worked his magic once again in Week 17 to help the Eagles make it back to the postseason with a shot at defending their Super Bowl title. Somewhat ironically, they'll be facing the Bears — the team whose win over the Minnesota Vikings secured Philadelphia's return to the playoffs — in the wild-card round.

#JimmySays: So we only have one publication above that doesn't have the Eagles dead last among the NFL's playoff qualifiers.