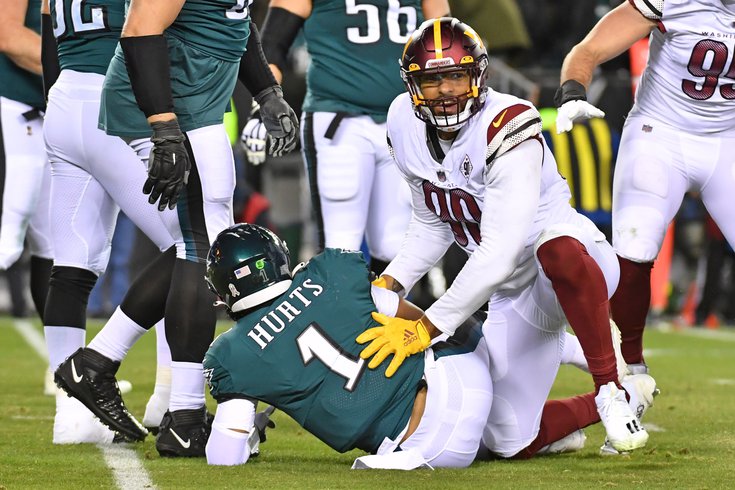 It looks a little like Jalen Hurts gave himself up here and the Washington defender gently touched him. Isn't this a penalty?

Here's where people have the Birds ranked after Week 10. Oh, and here's our version of these sellout rankings, too.

The Eagles were overdue for a bad game, which is a fair classification of Monday night's 32-21 stumble to the Commanders at the Linc. Philly's first loss of the season included four turnovers and a crushing late-hit penalty against Brandon Graham, however unsatisfying the call might have been. The Eagles lost because they couldn't keep the Commanders' offense off the field: Washington ran 34 more plays than Philly and possessed the ball for more than 40 minutes of game time. The defense held its own despite all those extra snaps, but the offense wasn't sharp enough when its opportunities arrived. A frustrating loss, for sure, but the Eagles remain the top team in the NFC with an inside track to the No. 1 seed.

#JimmySays: To my surprise, many of the notional folks still have the Eagles in the top spot. None of the power rankings that we round up weekly dropped them further down than second.

Who was on the hot seat in preseason: QB Jalen Hurts

With Hurts eligible for a contract extension after the season and the Eagles holding two first-round picks in April's quarterback-rich draft, this was widely viewed as a prove-it year for Hurts -- and he definitely has so far. He is squarely in the MVP discussion thanks in large part to his passing improvements. Entering Monday's game against the Commanders, Hurts' completion rate sat at 68.2% -- sixth best in the NFL and up nearly seven points from last year's mark (61.3%).

#JimmySays: ESPN noted players on the hot seat entering the season, and an update to their statuses. Hurts was the obvious choice for the Eagles, and obviously he has put so many concerns to bed over the first couple months of the season. The other seat that was hot entering the season was Jonathan Gannon. I would say that for the most part his seat has been cold this year, but he did not have a good night on Monday.

After winning the turnover battle in each of their first eight games, everything finally went against Philadelphia in its surprising Monday night loss. A costly fumble on an uncalled face mask penalty, another after a 50-yard completion to Quez Watkins that looked like it might set up the game-winning score, and a borderline unnecessary roughness penalty on Brandon Graham after Taylor Heinicke gave himself up late that was either genius or cheap, depending on your perspective. Those were bad breaks bound to happen at some point, even if Nick Sirianni insisted last week that “luck has nothing to do with” their turnover fortune. Of greatest concern is the passive run defense the Eagles have rolled out since rookie nose tackle Jordan Davis went on injured reserve. They have surrendered 320 combined rushing yards over the past two games.

#JimmySays: On the "genius or cheap" point on Heinicke, when teams get into super long down and distances (like 3rd and 25, for example), quarterbacks should just go down on their own, and wait for a lineman to accidently fall into them. Boom, first down.

The Eagles had just three turnovers entering Week 10, four fewer than any other team in the NFL. They were bound for regression and got it all at once on Monday Night Football. Philadelphia matched its season total in turnovers with three against the Commanders, including a Dallas Goedert fumble on a play during which he was clearly grabbed by the face mask. Officials did not throw a flag—and the face mask was not reviewable. Monday also marked the first time the Eagles trailed in the second half at any point this season. I’m not dropping the Eagles from this spot after their first loss, but they can’t afford many more of these messy games if they want to hold on to the top spot in the NFC standings.

#JimmySays: The Eagles for years at the NFL owners meetings have been pushing for more plays to be reviewable. It's kind of asinine that in 2022 the league hasn't yet figured out a way to be flexible in correcting such obviously egregious missed calls on the field like the Goedert fumble on Monday night.

Unsurprisingly, they're mortal and will pose no threat to the still-unbeaten 1972 Dolphins. But amid a season that feels high on drama but low on greatness, they retain the top spot almost by default – especially since the University of Georgia is ineligible for these rankings. Yet Monday's setback to Washington did seem a touch fluky, Philadelphia turning the ball over four times after entering Week 10 with three giveaways on the season while also getting victimized by some shaky officiating. And a keepaway strategy and domination of time of possession almost always works ... even when you average 4.1 yards per play, as the Commanders did while holding the ball for more than 40 minutes.

#JimmySays: I agree that there was a fluky element to the Eagles' loss on Monday night. There were certainly no shortage of odd plays that went the other way, many of which had major impacts on the game's outcome. But ultimately, the Eagles got owned on 3rd down all night.

Yes, officials missed a blatant facemask on a huge fourth-quarter fumble by Philly. The Eagles have a right to be upset about that. Put that aside for a moment: The Eagles got outplayed by an 11-point underdog at home. They are having trouble against the run with rookie defensive tackle Jordan Davis out due to injury. Everyone in the NFL has lost already, and most teams have at least one bad loss. Losing on Monday night doesn't mean the Eagles aren't really good. But they have to be honest with themselves: The officials weren't the only reason they lost.

#JimmySays: I'm not sure if this is insinuating that Eagles players or coaches were blaming the loss on the missed calls, because none did after the game.

If they don't fix the run defense, they will have more losses the rest of the way. You can't play defense that way and win in the playoffs.