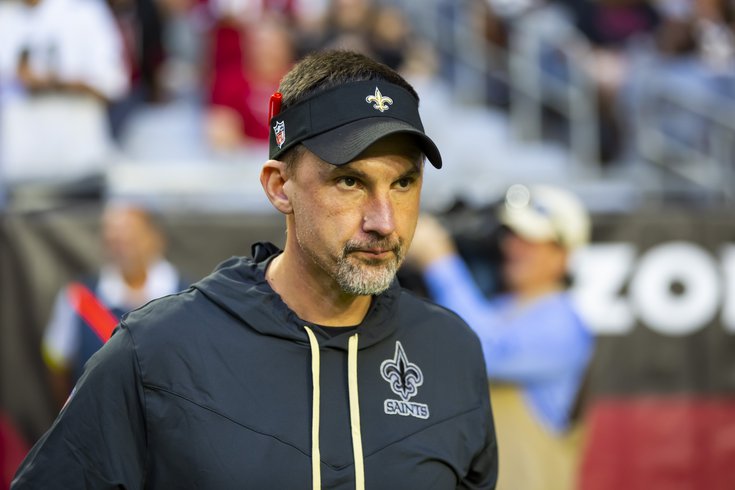 Going from Sean Payton to Dennis Allen wound up being a pretty big deal. #Analysis

Week 10 of the NFL season is in the books and there are no longer any undefeated teams in the NFL after the Philadelphia Eagles stubbed their toe against the Washington Commanders Monday night. Will the Birds be moved down in the hierarchy?!? 😱. Spoiler: No.

We have one new obituary this week, the New Orleans Saints.

Saints (3-7): The Saints made three significant trades this offseason. Two were with the Eagles, and one was with the Commanders.

Here's a roundup of what the Saints gave up in those three trades, and what they got in return:

The Saints went all in to draft a couple of players that fit immediate needs, and one of those players (Penning) has yet to even play a down of football this season.

In an episode of "The Office," I thought Jim Halpert did a nice job breaking down the relationship between Michael Scott and Jan Levinson's sperm donor baby.

I thought I'd take a crack at the Saints' 2022 season using Jim's flow chart.

My #analysis: Sean Payton and Drew Brees masked a bad front office over the last 15 years, and this team was destined to fall hard, which they now have. 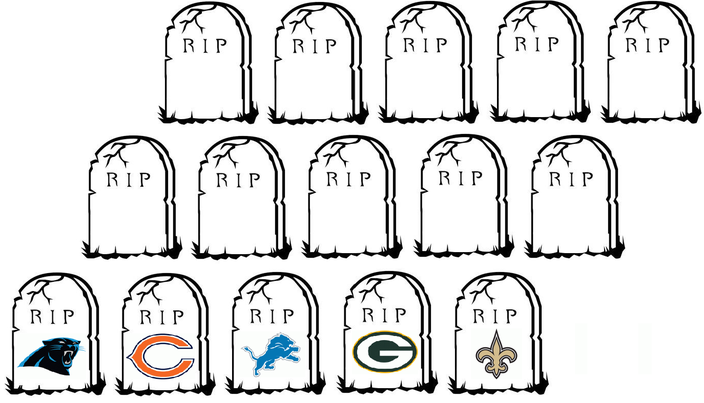 11) Rams (3-6): I almost killed off the Rams this week after the reigning champs suffered their fifth loss in six games. The only thing that stopped me was (a) I killed off the Saints this week, so I'd prefer to give the Rams their proper sendoff whenever we do kill them off, and (b) they have at least (mostly) played good teams during that six-game stretch, like the Niners x2, Cowboys, and the rejuvenated Bucs.

If they lose in New Orleans next week, they'll be an obvious obituary.

10) Cardinals (4-6): Colt McCoy made smart decisions, he didn't turn the ball over, and he seemed to spark what has normally been a lifeless Cardinals offense this season in a win over the Rams. Obviously, Kyler Murray is much more talented quarterback, but, you know, he doesn't play up to his capabilities. Kinda reminds me of Taylor Heinicke and Carson Wentz in Washington.

8) Commanders (5-5): I figured Carson Wentz would eventually fill back in for Taylor Heinicke whenever he's good to go, but that's not really a defensible way to go after Heinicke has won three of four, despite not having any real quality tangible starting NFL quarterback traits.

7) Seahawks (6-4): The Seahawks will have their bye this week after returning home from their loss in Munich, and then they'll have a very easy stretch of their schedule:

They still have a half game lead in the NFC West, but the Niners will overtake them on the strength of a Week 2 head-to-head win if they can beat the Cardinals in Mexico on Sunday.

Seattle probably has to sweep that three-game stretch noted above if they are going to have any real hope of outlasting San Francisco for the division.

They had also driven 49 yards in 9 plays on what was looking like a scoring drive, when Leonard Fournette threw a 50-50 ball to Tom Brady that was picked off by Tariq Woolen. (Yes that sentence is right, in case you didn't watch that game.)

Tom Brady can still engineer methodical drives, and the Bucs' run defense held rookie phenom Kenneth Walker to 17 yards on 10 carries. They still aren't anywhere near as good as they have been the last two seasons, but they're at least beginning to look a little bit more recognizable.

5) Cowboys (6-3): In overtime against the Packers, the Cowboys went for it on 4th and 4 (it was actually more of a long 3) at the Packers' 35 yard line. They did not get it, and we were all treated to the ensuing headset spike from Mike McCarthy.

Mike McCarthy decided to go for it on 4th and 4 on the Packers 35-yard line.

They did not convert. pic.twitter.com/8Wg0ChF026

McCarthy has been roundly criticized for going for it in that situation, but I actually didn't hate it.

Let's assume that the Cowboys' odds of converting that fourth down are, sayyyy, around 50 percent, which really isn't that big of a difference from attempting the field goal. If you convert, you keep alive the opportunity of closing out the game with a TD, and you're also likely creating an easier field goal attempt if your drive stalls thereafter. It's also worth noting that Maher is a perfect 11 for 11 from inside 50 this season. We love when teams are aggressive and then we crap all over them when they take chances but fail.

Ultimately, the Packers beat the Cowboys in a similar way that the Commanders beat the Eagles. The Packers knew they were the less talented team, so they tried to shorten the game by running the crap out of the ball. And the Cowboys got gashed, by the way. They allowed 207 rushing yards on 39 carries (5.3 YPC).

4) 49ers (5-4): Remember when the Niners looked like they might have a juggernaut defense, and then Chiefs put 44 points and 529 yards on them? Well, they've responded. In their last two games, they have allowed 223 yards and 16 first downs to the Rams, and 238 yards and 12 first downs to the Chargers.

3) Giants (7-2): The way that the Giants are using Saquon Barkley this season leads me to believe that they don't intend on bringing him back in 2023. Derrick Henry and Barkley are No. 1 and No. 2 in rushing attempts this season, at 202 and 198, respectively. The next closest guy, Dameon Pierce, is 33 carries behind Barkley at 165 carries. Barkley carried 35 (!) times against the Texans on Sunday, and he is on pace for 374 carries on the season.

2) Vikings (8-1): Let's all just take a moment to appreciate Justin Jefferson's performance against the Bills. (You'll have to click "Watch on YouTube.)

He has everything — speed, YAC ability, route running, contested catches, playing through contact, fearless over the middle, and, uh, hands. #JustASlotReceiver.

There were certainly things that went badly against the Commanders that were within the Eagles' control, like the way-too-late defensive adjustments from Jonathan Gannon once the Commanders' game plan was crystal clear, for example. But I didn't think that was a loss where one could look at the Eagles and say, "What a bunch of frauds." The Commanders sought to shorten the game, which they did, and a whole lot of breaks went their way. That game doesn't diminish what the Eagles did to get to 8-0.