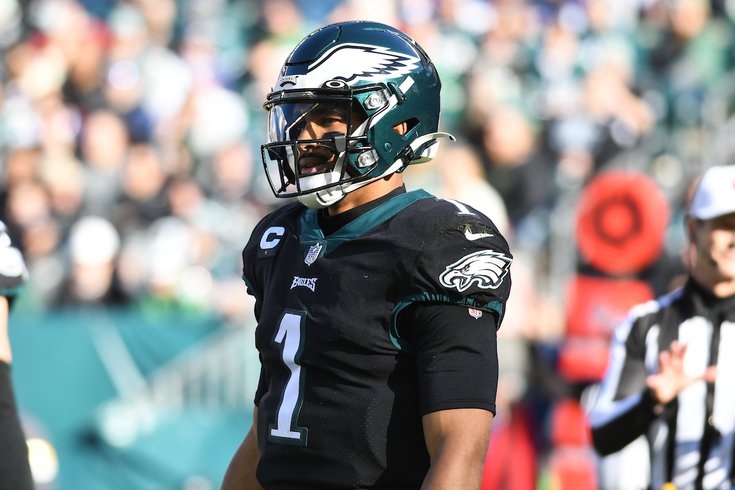 Here's where people around the country have the Eagles ranked heading into Week 18 of the 2021 regular season. Oh, and here's our version of these sellout rankings, too.

The Eagles want to be a "quarterback factory," as general manager Howie Roseman once famously said, and that's not a bad mindset to have -- over investing in the most important position in pro sports is generally smart. But the QB1 also needs to feel supported. When Carson Wentz felt that was in question after the Eagles selected Hurts in the second round of the 2020 NFL Draft, things fell apart quickly. It might be enticing for the Eagles to use some of their handsome draft capital (they have three first-round picks this April) to secure a big-name quarterback, but Hurts has guided his team to the playoffs in his first year as a full-time starter, and at age 23, deserves some breathing room before the Philly brass gets the factory up and cranking once again.

#JimmySays: At a minimum, Hurts has played well enough to give the Eagles the option to stick with him for at least another season if the right quarterback doesn't become available for the right price. However, if the Eagles can substantially upgrade at the quarterback position, Hurts hasn't been so definitively good that Roseman shouldn't pursue a better player.

Four straight wins punched a ticket to the postseason for the Eagles, but it’s fair to wonder if Philly is the NFC’s answer to the Dolphins -- another team that fattened up on the league’s have-nots. The Eagles' current win streak has been built on the backs of the Jets, the Giants and Washington (twice). Take a step back and you’ll see Philly doesn’t have a single win against a team that currently has a winning record. It will be the sensible play when Iggles fans pull those “underdog” masks out of their closets in a couple weeks.

MORE: NFC Hierarchy/Obituary: Week 18 | With Eagles clinching playoff berth, it's time to admit I was wrong about this team

#JimmySays: They can be like three offenses that run the ball all day? I’m not sure that’s “shapeshifting.” ;)

Remarkable rise from 2-5 to playoff qualifiers, though COVID-19 might be giving some Philly players an unwanted bye in Week 18.

#JimmySays: So 14 teams make the playoffs, and the Eagles are one of them, and they're ranked lower than 14th... 🤔.

Also, I'm pretty sure Eagles players are thrilled to have a bye week instead of getting their tired bodies torn apart in a meaningless Week 18 game.

#JimmySays: No specific analysis on the Eagles here, but they worked their way up into "the contenders."

The Philadelphia Eagles are back in the postseason.

Sunday's victory in D.C. more or less followed the same script the Eagles have used to turn their season around. They ran the ball 34 times in Week 17, and while they gained just 3.5 yards per carry, the Eagles controlled the flow of the game and won the time-of-possession battle.

After the game, quarterback Jalen Hurts told reporters that the team's success has been about committing to their smashmouth mentality.

"We just bought in to who we are, bought in to what we could be and trusted in the grind in approaching every day the way we do," Hurts said. "I couldn't be more proud of this team."

With a postseason berth assured, the Eagles can breathe a little easier about next week's visit from the Dallas Cowboys. It's also possible that the team sits Hurts to allow his injured ankle to heal.

But knocking off Dallas would also go a long way toward establishing that the Eagles can have success in the postseason.

#JimmySays: It's a near certainty that the Eagles will rest their starters.

MORE: John McMullen: A ‘calm’ culture changer has Eagles back in postseason | Eagles LB Davion Taylor done for the season

Who had the Eagles winning 10 games this season? That's on the table considering Dallas should be resting starters in Week 18, since the No. 1 seed in the NFC isn't possible anymore. It has been a nice first season for new coach Nick Sirianni.

#JimmySays: Apparently, the Cowboys are not resting their starters.

That doesn't make much sense to me. The Packers already clinched the 1 seed. There's some benefit in getting the 2 seed vs. the 3 or 4 seeds, but because Dallas lost on Sunday, their chances of getting the 2 seed are now very slim. Here's what they would need to have happen:

The Cowboys would be foregoing rest and risking injury for a non-guaranteed advantage.

They struggled some against Washington, but they found a way late to win it, which is a good sign. They are in the playoffs.