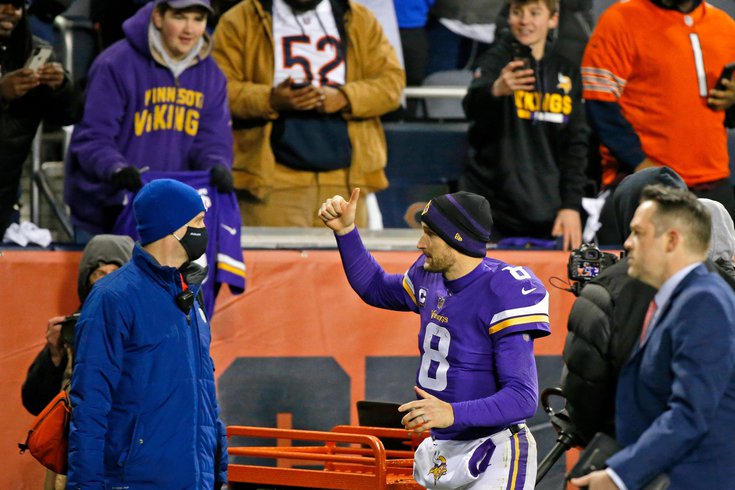 Kirk Cousins got paid a lot of money to watch his team get smoked from home.

Week 17 of the NFL season is in the books, and six of the NFC's playoff spots have been clinched, with the San Francisco 49ers and New Orleans Saints jockeying for the final spot. We have one new obituary, the Minnesota Vikings.

Before the season began, Kirk Cousins suggested surrounding himself with plexiglass in the quarterbacks room, as an alternative to getting vaccinated.

He was widely mocked, obviously. 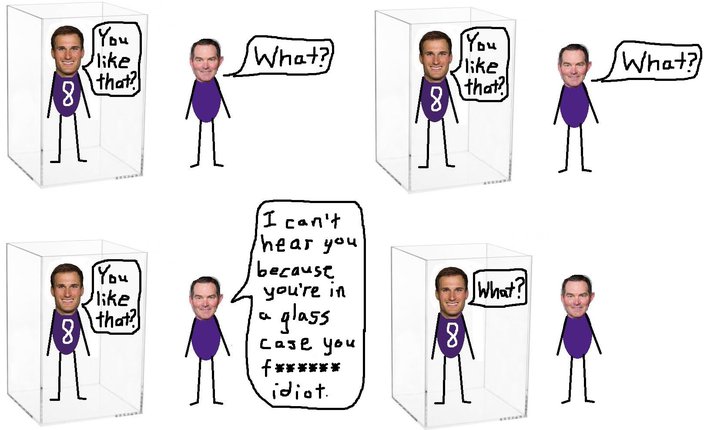 In advance of an elimination game in Green Bay, Cousins contracted COVID, journeyman Sean Mannion was forced to start, and the Vikings got absolutely smoked. It's honestly hard to imagine a more predictable end to Minnesota's season.

As for the future of the franchise, there is speculation that Mike Zimmer could be out. In his first six seasons, for a head coach who has become something of punching bag for analytics nerds (oftentimes for good reason) Zimmer was 57-38-1. In his last two, though... 14-18.

The Vikings should probably move on from Zimmer, and definitely Cousins, and rebuild with a fresh message. Unfortunately, they are stuck with Cousins for another year, and he'll count on their cap for $45 million in 2022, unless they can offload him on some other suckers (good luck). 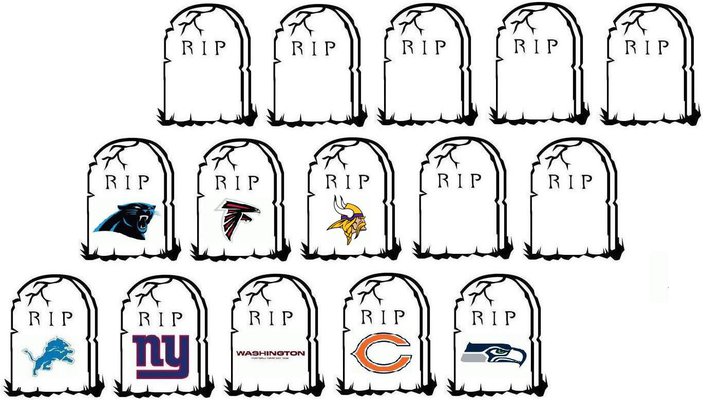 8) Saints (8-8): I'll give credit where it's due. The Saints don't have a quarterback and they've managed to stay in the playoff picture for the entirety of the season. Still, they're on the outside looking in heading into Week 18, as they'll need a win in Atlanta and a Niners loss to the Rams to get in.

7) 49ers (9-7): We got to see Trey Lance in action on Sunday. Here are all of his runs and throws against Houston. There's a lot to clean up, but physically, there's no comparison between him and Jimmy Garoppolo.


Playing Garoppolo over Lance all season remains one of the oddest choices of this 2021 season. It's like playing Gardner Minshew over Jalen Hurts, but way worse.

Anyway, as noted above, the Niners are in the playoffs with a win of their own over the Rams, or a Saints loss to Atlanta. They aren't going anywhere with Garoppolo, and it's too late for Lance to make the strides necessary to beat the best teams in the NFC.

MORE: With Eagles clinching playoff berth, it's time to admit I was wrong about this team | McMullen: A ‘calm’ culture changer has Eagles back in postseason | Philadelphia Eagles COVID list tracker

6) Eagles (9-7): I was curious what my 10 Eagles predictions were prior to the start of the season, so I fearfully took a peek back at what I wrote in September. Here's what I found, with a ✅ next to the ones that I deem that I got right, and an ❌ after my misses.

1) There will be continued ambiguity as to whether Jalen Hurts is "the guy." ✅

2) Miles Sanders will have a bounce-back season. ❌

Sanders is averaging 5.5 yards per carry, but he has had some mental errors, he's missed a bunch of games, and he has not been impactful in the passing game. I can't call this a bounce-back season.

3) DeVonta Smith will lead the team in receptions and receiving yards. ✅

He has a narrow lead over Dallas Goedert, who is currently COVID positive, and super unlikely to play on Saturday, assuming the Eagles rest starters.

4) Jordan Mailata will be very good. ✅

Facing guys like Garrett Gilbert and Jake Fromm helped, but they're 8th in points allowed, 7th in yards allowed.

6) Josh Sweat will have double-digit sacks. ❌

Sweat is by far the Eagles' best edge rusher, but he is 2.5 sacks shy of double digits with one game left that he likely won't play.

7) The linebackers won't make you want to throw your TV out the window. ✅

The sentiment here is that they'd be way better than Nate Gerry, which I guess wasn't going too far out on a limb.

8) They will be (mostly) ill-equipped to handle injuries. 🤷‍♂️

Like most, I did not think this team would have a winning record and make the playoffs.

10) The Dolphins won't make the playoffs, and neither will the Colts. ✅🤷‍♂️

The Dolphins are eliminated, but the Colts need only to beat the Jaguars Week 18 to get in.

This was probably only a fun exercise for me, and me alone. Sorry.

5) Cardinals (11-5): As we noted after the Eagles clinched a playoff berth, their likely first-round opponent will be the Tampa Bay Buccaneers. That happens to be the most likely of the NFL's wild card matchup, at 80 percent, per FPI. The next most likely matchup? A rematch of the Cardinals-Cowboys matchup Week 17, at 70 percent:

Most likely wild card round matchups, per FPI:

After a three game losing streak, the Cardinals had an impressive bounce back game in Dallas that they controlled throughout. Of course, they got some luck, which we'll get to in a minute.

4) Rams (12-4): Matthew Stafford has thrown 6 INTs and fumbled twice in the last three games, but the Rams keep on winning. This is the team the Eagles should hope to face in the first round of the playoffs, which is extremely unlikely if they beat Dallas on Saturday, but a decent enough possibility if Dallas beats them.

3) Cowboys (11-5): As noted above, the Cardinals got some luck in their win over the Cowboys. It was on this play that should have been a fumble, but the runner was ruled down on the field:

This appears to be a fumble huh?

Dude is SO ATHLETIC his right knee somehow doesn’t touch.. I would’ve collapsed 6 times during this

I had the Cardinals so like.. certainly good for me and stuff but.. Cowboys fans seem to have something legit here pic.twitter.com/wy2ZTpWeZj

So, that isn't some egregious "no clear recovery" nonsense. You have to watch that play from like three different angles to determine when the ball came out, and that the runner's knee almost impossibly didn't touch the ground.

The play stood because the Cowboys had already burned all of their timeouts, and thus couldn't challenge. Of course, that's something you have to consider when you use your timeouts before the two minute warning. Lesson learned for 15-year head coach Mike McCarthy, I suppose.

Cowboys players acted as if the officials were out to get them. For example:

Cowboys LB Leighton Vander Esch: “It was totally a fumble, and I just don’t understand how, with the technology we have nowadays, even if we don’t have timeouts or whatever it may be … Certain things are so obvious. …To me, we’re playing more against the refs than other teams.”

Lol what? Cowboys players/fans acting like officials are purposely wronging them is just... 🤯.

2) Buccaneers (12-4): I love how the punter just keeps warming up as Antonio Brown is disrobing a few feet away.

Antonio Brown has a meltdown at the hand of the #Jets and #BraxtonBerrios pic.twitter.com/RGhSYpyrOu

OK, so, the Bucs have one less significant weapon in their offense, and they nearly lost to the freaking Jets. Meh. They'll be fine in the playoffs.

1) Packers (13-3): Over the last few weeks, we've been beating the "Packers are an unimpressive 1 seed" drum pretty hard, but they looked pretty nasty on Sunday night, even if they were facing Sean Mannion.