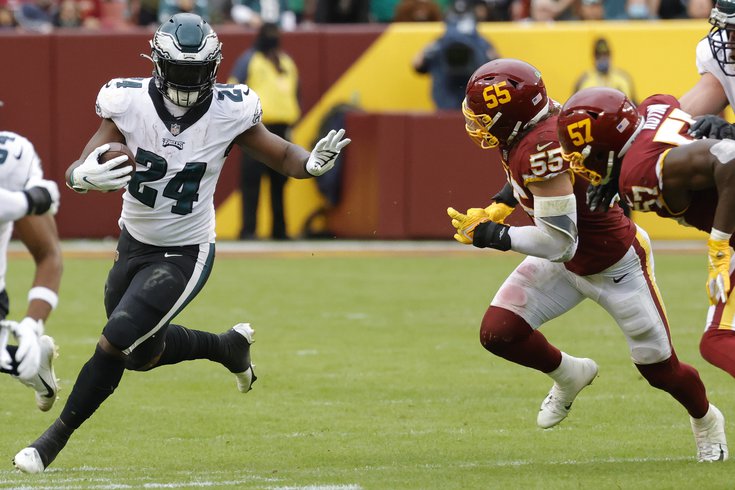 Jordan Howard could use some time off.

In their Week 17 win over the Washington Football Team, the Philadelphia Eagles played 61 snaps on offense, and 63 on defense. Let's just get right to the snap counts, and some notes.

Analysis: In our postgame "10 awards" post, we gave Hurts a neutral rating (tilting toward stock up) on his ongoing stock up / stock down tally, which was met with fierce opposition. Most felt that it was a clear "stock up" game for Hurts. We gave him a neutral rating because Nick Sirianni continued to pound the run on a day in which the run game wasn't there, and there were ample opportunities in the passing game. Sirianni opted not to put the game on the shoulders of his quarterback, which in my view is sort of telling.

However, how Hurts is used shouldn't really matter in terms of evaluation of his play. He managed the game, didn't make any big mistakes, and his tone-resetting scoring drive to start the second half, capitalized by an athletic pitch on 4th and goal to Boston Scott, was quite impressive. So, OK, stock up. 📈

Analysis: Howard very clearly wasn't 100 percent. He ran 11 times for 26 yards. The Eagles should be resting starters next weekend, and Howard can use that time off. We'll also get a better idea in the next week or so if Miles Sanders can return to the lineup. Sanders has been a polarizing player this season, but no matter how you feel about him, the Eagles missed him on Sunday.

Analysis: After 16 games, Smith has 61 catches for 875 yards and 5 TDs, a solid rookie season for the No. 10 overall pick playing in the most run-heavy offense in the NFL.

Reagor finished with negative yards for the third time this season, a pretty amazing feat.

Analysis: Through 16 games, Goedert has 56 catches for 830 yards and 4 TDs. He's on his way to becoming a top 5 NFL tight end. He also blocked his ass off against Washington.

Analysis: Washington's defensive line played much better against the Eagles than they did a couple weeks ago. I won't know until the re-watch whether the run game sputtered because holes weren't there, or if the running backs left meat on the bone.

Hurts was only sacked once, and while he had to escape pressure on occasion, it felt like the pass protection was good against a talented Washington defensive line.

Analysis: Sweat had his most important performance of the season, as he had 1.5 sacks, and a pair of batted passes. His continued development is encouraging.

Kerrigan is cooked. I mean, we've known that all season long, but he was especially bad against Washington, to the point where he was glaringly stymied by backup RT Cornelius Lucas. Given how many times I noticed him getting completely swallowed up in pass protection, I'm shocked that he only played 14 snaps.

Analysis: Another game, another 10+ tackle performance by T.J. Edwards. He had 13 against Washington. I'll note here that he's been great punching at the football while making tackles, and it's only a matter of time before he forces some fumbles.

Oh, and hey look (!), Avery is suddenly frisky. He's been disruptive of late getting pressure on the quarterback. Have the Eagles finally figured out how to use him?

Analysis: McLeod will deservingly get a lot of pub for his game-sealing INT, but I think that Maddox's clutch play on Washington's stalled fourth quarter drive was impressive. He was called for a BS pass interference penalty, he made a nice open field tackle to set up 4th and 4, and then helped make the play that resulted in a turnover on downs. He has had a really nice bounce back season.