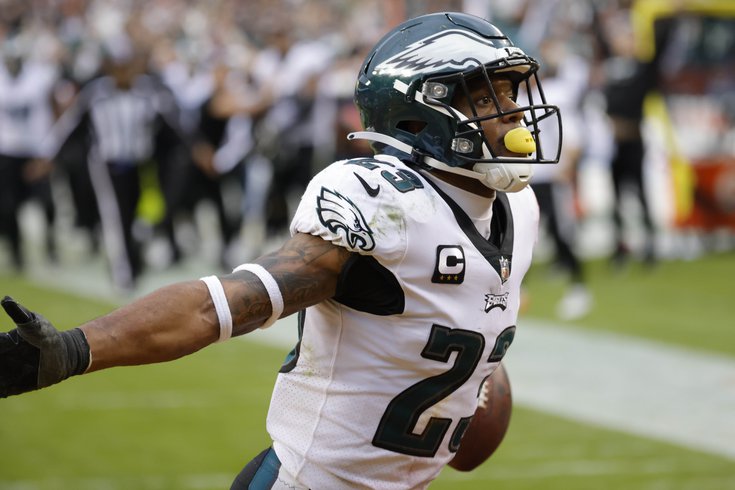 The Philadelphia Eagles beat the Washington Football Team in a game with major playoff implications on Sunday, by the score of 20-16. As always, win lose, or tie, we hand out 10 awards.

No matter what happens against Dallas next weekend, the Eagles will win more games than they will lose in 2021, at least during the regular season. There were more than a handful of bad opponents — and some low points — along the way, but the Birds found a way to win at least nine games, which exceeded expectations heading into this season.

They have now won four straight games, albeit against a quartet of teams with a 20-44 record, and with some luck (we'll get to that in a bit), could clinch a playoff berth by the time the day is over.

Of course, the aforementioned four-game winning streak hasn't always been pretty, especially at the beginning of each game, as the Eagles have been outscored 35-7 in the first quarter of their last five games.

The Eagles don't seem to know why the slow starts keep happening, buuuut that needs to get fixed if they want to avoid an immediate exit from the playoffs, should they get that far.

The Eagles stuck to the run today even when it wasn't as dominant as it has been over the back half of the season. They ran it 34 times for 118 yards (3.47 YPC) and 2 TDs. Jordan Howard looked hampered, and while Boston Scott scored twice, I do think the Eagles missed Miles Sanders.

Let's go ahead and update Hurts' stock up / stock down tally:

On the day, Hurts was 17 of 26 for 214 yards, 0 TDs and 0 INTs. He didn't make big mistakes, but on a day that the rushing attack wasn't performing at a high level, Nick Sirinni seemed apprehensive about putting the game in Hurts' hands. Hurts made some nice throws, particularly one on the run to Greg Ward, but there were others that he missed.

Hurts' best play of the day was his ability to somehow pitch the ball to Boston Scott on fourth down at the goal line.

That's just an athletic kid turning a disaster into a touchdown. I think it was closer to a stock up performance than a stock down performance, but on the whole, I think we have to go neutral here.

UPDATE: So it appears I'm being nearly unanimously overruled in the "stock neutral" call. Alright. I can re-watch and reevaluate.

Clinging to a one-point lead in the fourth quarter, Maddox had three great efforts in a span of five plays. He had excellent man-to-man coverage, breaking up a pass intended for Washington's best skill player, Terry McLaurin. He was flagged for a ridiculous pass interference call on the play, but whatever.

He then made a great one-on-one tackle to set up a 4th and 4, and was in position to help create an incompletion on fourth down, resulting in a turnover on downs.

That was a huge, game-turning series by Maddox, who helped justify his in-season contract extension today.

Sweat had pair of sacks (he had to share one with Fletcher Cox), and he got his hands on a pair of passes. The sacks weren't cheapies, either. Sack No. 1:

Sweat now has eight sacks on the season.

The Eagles haven't been involved in many nail-biters this season. When they've won, they've typically won handily, and when they've lost, again, those games typically haven't been super tight. McLeod delivered the game-sealing play with this great catch on a diving interception.

McLeod has kinda been a quiet, but great Eagles player over the years.

If Elliott would have missed either of his field goal attempts from 42 or 41 yards, the Eagles probably lose this game, right? So we should probably give him a little hat tip for, you know, not missing them.

In 2020, the Washington Football Team swept the Eagles in a pair of games in which the Birds were severely depleted. In 2021, the Eagles returned the favor.

As you're no doubt aware by now, the Eagles can clinch a playoff berth, today, if the following two boxes are checked: