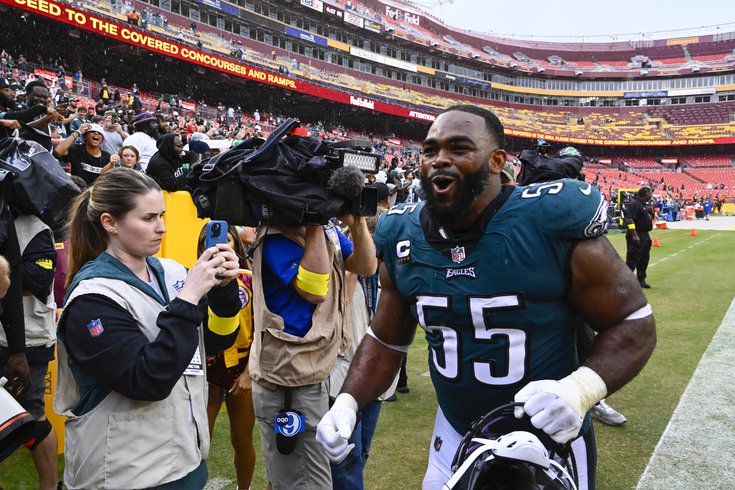 Here's where people have the Birds ranked after Week 3. Oh, and here's our version of these sellout rankings, too.

Philadelphia's a big green wrecking machine right now. Jalen Hurts and the Eagles' offense have been showing out since the season opener in Detroit, but now Nick Sirianni's defense has announced its arrival with a dominant nine-sack performance against the Commanders and old friend Carson Wentz. What's the most pressing "problem" for the undefeated Iggles? DeVonta Smith was so dominant on Sunday (156 yards in the first half alone), it calls into question whether A.J. Brown is the team's true No. 1 receiver. "By the eyes, he might be a little slight, but he plays like a big boy," Hurts said of Smith. "He's a guy, when his number's called, I know he'll answer the phone."

Jalen Hurts is one of the early favorites to be league MVP. His production on the ground remains strong -- he ranks second among quarterbacks in rushing yards (167) and first in rushing touchdowns (three) -- but it's his improvement as a passer that has put the NFC on notice. Hurts is completing 67.3% of his passes, compared with his career average of 60%. He ranks third in passing yards (916) and is sixth in QBR (74.8). His standout play is the No. 1 reason the Eagles are 3-0.

#JimmySays: Hurts also just hasn't made any big mistakes. His lone INT on the season was an on-target pass to Kenny Gainwell, that was dropped, and his lone fumble was a dropped shotgun snap that was never in danger of being recovered by the defense.

After beating Carson Wentz and sacking him nine times, the Eagles prepare to face Doug Pederson, the Super Bowl-winning head coach who still has a statue outside the stadium. After that, they travel to Arizona for a game against Zach Ertz, who caught the winning touchdown pass in that Super Bowl. The season is starting to feel like a weird test in which they have to prove themselves worthy of Super Bowl aspirations by defeating a long list of ghosts of 2017. In addition to Wentz, they’ve already vanquished the Halapoulivaati Vaitai-Nate Sudfeld duo in Detroit and Jordan Hicks on the Vikings. Still left on the schedule are Dallas (Jason Peters), Houston (Kamu Grugier-Hill), Indianapolis (Rodney McLeod and Frank Reich), Green Bay (Rasul Douglas) and Tennessee (Jim Schwartz). Maybe that means we’re due for an Eagles-Patriots Super Bowl rematch to pair Jalen Mills and Nelson Agholor against their former team.

Meanwhile, Jalen Hurts is coming off a 22-of-35 performance for 340 yards and three touchdowns, which somehow felt meh. Hurts ranks fourth in EPA per dropback among all quarterbacks and is the biggest reason why the Eagles’ ceiling has fans dreaming of a Super Bowl trip — the Eagles are listed as +350 to win the NFC, the lowest odds in the conference ahead of the Packers (+400) and Bucs (+400). But the defense has held its own, too. Sunday’s sack deluge skews the numbers a bit, but the Eagles top the league in EPA per play when rushing only four. Now if only they could figure out how to score in the second half.

#JimmySays: Bo! Nick Foles plays for the Colts, too!

There’s nothing positive I can say about the Eagles that Philly faithful aren’t already screaming at the top of their lungs. Jalen Hurts is a legitimate MVP candidate, the A.J. Brown–DeVonta Smith receiver combination is ascending to the top of the NFL, the offensive line is a top-three unit in the league—you name it, the Eagles have it. Hell, even their defense has bounced back in impressive fashion after allowing 35 points to Detroit in Week 1. Over the last two weeks, the Eagles rank first in yards per play allowed (3.8) and second in total points allowed (15).

The Philadelphia Eagles are rolling.

It isn't just that the Eagles are the NFC's only remaining undefeated team. Or that after blasting the Washington Commanders on Sunday, the Eagles have won their last two games in blowout fashion.

It's the way they are winning.

Quarterback Jalen Hurts looks like an MVP candidate after becoming the first player in NFL history to throw for 900 yards and run for 150 yards over the first three games of the season. Wide receivers A.J. Brown and DeVonta Smith have been a lethal combination. Philly's offensive line might be the NFL's best.

Defensively, the Eagles rank among the top 10 leaguewide in both yards and points allowed. The Eagles sacked Carson Wentz a whopping nine times Sunday. And Darius Slay and James Bradberry are one of the NFL's best one-two punches at cornerback.

#JimmySays: The Eagles' last two games do sort of remind me of the way they were smashing teams in the middle of the 2017 season. They had that stretch against the 49ers, Broncos, Cowboys, and Bears during which they outscored their opponents 152-45. Their dominant wins over the Vikings and Commanders felt a lot like those games.

If you're dismissing the Eagles defense for playing "only" the Vikings and Commanders the last two weeks, go check what those two offenses did in their games that weren't against the Eagles. Philadelphia's defense is good. I'm bumping the Eagles way up because I was too conservative on them before. I kept seeing a team that had Super Bowl upside but didn't act on that enough in these power rankings. That has been corrected.

#JimmySays: Are people dismissing the Eagles' defense? They have indeed been fantastic the last two games. The Vikings and Commanders each have very good skill position players.

Jalen Hurts has carried this team to a 3-0 start. His ability to run and pass makes it a real challenge to defend this offense. The Jaguars defense will be a challenge this week.